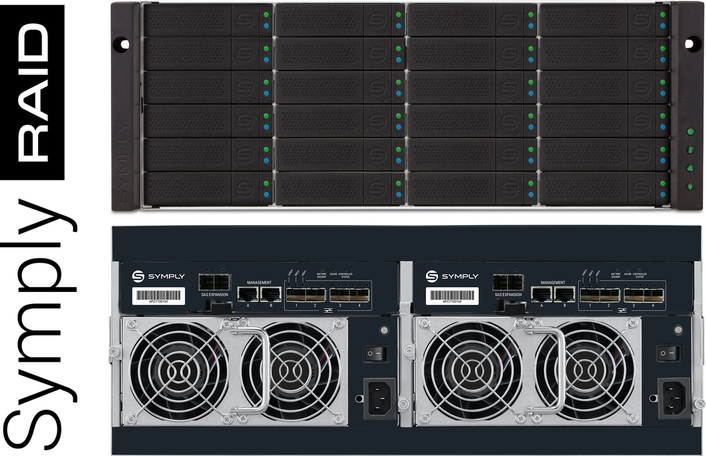 "SymplyRAID is unlike anything the industry has seen. Built on rock-solid engineering, it provides unmatched ease-of-deployment and an unparalleled price performance," said Alex Grossman, CEO and president at Symply. "Broadcast and post facilities with existing infrastructure need next-generation storage systems to deliver the performance required for 4K and beyond, without the increased complexity and high costs typically associated with adding more capacity. SymplyRAID is that solution for today's fast-paced media workflow environments."

Offering seamless integration into existing broadcast and post-production facilities, including Xsan and StorNext workflows, SymplyRAID provides a level of intuitiveness far beyond other systems on the market, enabling installation in minutes via user-friendly SymplyGO management and monitoring software. Developed in conjunction with Promise Technology, the system features a next-generation RAID Controller design based on the latest Intel® storage processor. With fast dual quad, 16Gb Fibre Channel connectivity, SymplyRAID can scale to nearly 1PB while delivering the consistent performance and low latency that is critical for handling the complex demands of media and creative workflows.

Based on a high-density rack-optimized design that packs a powerful punch, SymplyRAID includes 24 drives in 4U for maximum space efficiency. The high-availability RAID storage systems offer complete redundant power, cooling, and RAID controllers with no single point of failure. SymplyRAID is available in 3U 16-drive and 4U 24-drive configurations with capacities for any need, whether large or small. Performance and capacity scalability is easy with the addition of SymplyRAID expansion systems.

Using dual quad 16Gb Fibre Channel ports, SymplyRAID is capable of reading and writing up to 12GB and 5GB of data per second, respectively. It can handle up to eight streams of uncompressed 10bit Quad HD or hundreds of streams of ProRes 422 content. The inclusion of multiple Fibre Channel ports builds resiliency into the system, while enhancing speed and performance. Through SymplyRAID's remote management software, SymplyGO, users can easily set up and manage the system via macOS™, Mac® OS X®, Windows®, iOS, and watchApp devices.

SymplyRAID starts at an MSRP of $22,999, and is available from resellers everywhere. It comes with a comprehensive three-year warranty that includes overnight defective component replacement as well as 24/7 online assistance, including advice and configuration help from Symply's team of media, storage, and workflow experts.

About Symply
Symply creates high-performance digital storage for media creators and content owners, from the single editor to an entire facility. As a privately held, employee-owned company with locations in Los Angeles, New York and London, Symply blends intuitive, user-friendly software with rock-solid engineering to move storage from a need to a want.