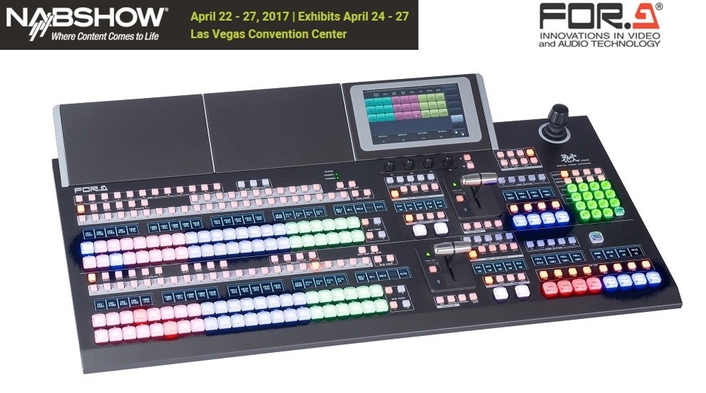 The new HVS-490 production switcher is designed for use in any live environment, including mobile shoots, events, and in-house corporate productions. Event memory and macro functions make it easy to set up quickly for live performances. And FOR-A’s MELite™ technology eliminates the need for multiple switchers in a multi-monitor staging scenario.

Thanks to its compact size, the HVS-490 is ideal for mobile production or live event venues where space is limited but production quality is critical. With integrated frame synchronizers and multi viewers, the HVS-490 reduces the amount of equipment required. Using multiple control panels, the system enables several operators to work on separate tasks.

Using optional input and output expansion cards, the HVS-490 supports 40 inputs/18 outputs, 36 inputs/20 outputs or 32 inputs/22 outputs, including two-channel HDMI outputs. In 4K, it allows 10 inputs/six outputs, nine inputs/six outputs or eight inputs/seven outputs. It also has 16 channels of 2.5 DVE as standard and can be optionally expanded to a maximum of 32 channels.

Building on the success of the HVS-2000 2 M/E  switcher, the HVS-490 offers features such as MELite™ and FLEXaKEY™, which allows a traditional AUX bus to transform into a functional Mix Effects with cuts, mix, wipes, keys, and DVE including full preview. MELite extends the switcher’s 2 M/Es to 6 M/E performance. MELite is the building block for more easy-to-use features of the HVS-490, such as upstream and downstream transition effects.

The four FLEXaKEY™ keyers provided are designed for flexible reassignment. They create keys that can be freely assigned to M/E 1, M/E 2, or AUX buses (if there is a need for 4 keyers on an AUX, no problem), thus extending the switcher’s performance beyond that of conventional switchers. Up to 12 keyers can be combined. Combine an AUX bus and MELite™ for P-in-P display or use as an upstream key. FLEXaKEY can also be applied to create a multi-monitor video wall with a single HVS-490.

HVS-490 has a frame synchronizer and a process amplifier at all inputs, and a resize engine (enlarged) is also installed within four video inputs. The switcher can input SD and HD resolution video simultaneously without external devices, such as up-converters. PC images can also be resized.
The HVS-490 has a built-in multi-viewer that supports three outputs as standard. Ten or more layout patterns can be selected for each output, including a 16-split view. By using the HDMI 2.0b output at 4K, a display of up to 48-split is possible with three outputs.

The HVS-490 includes an extensive feature set of audio functions. Users can bring AES audio directly into and out of the mixer, reducing the need for external embedders and de-embedders. Natural sound audio can be routed from one source as a master to other outputs, and an internal frame sync can be added without losing the embedded audio.

With the HVS-100TB2 Thunderbolt™2 Expansion Card, a total of four streams of full HD non-compressed video input and output can be transferred by a single card to any HVS series switcher via a single connection. Thunderbolt interface products, such as a ClassX graphics solution, Video Exchange server, or FOR-A switcher can be supported for transfer of video, audio, and control signals.

The new MBP-200TB2 SDI Gateway can convert large amounts of media into SDI-formatted video through single Thunderbolt™ cable, transferring any range of graphics, including: on-screen text, RCG, video marking, clip server playout and more. This eliminates the need for a workstation or dedicated graphics station. Just connect the gateway to a notebook, camera, or other video equipment. (*1)
Also being introduced are new tools for FOR-A’s next generation HD telestrator - the FVW-700. The FVW-700 supports 4K UHD and 1080p HD. New to the FVW-700 are pre-formatted and hand-drawn icons, a highlighted video marker, and a WiFi interface.