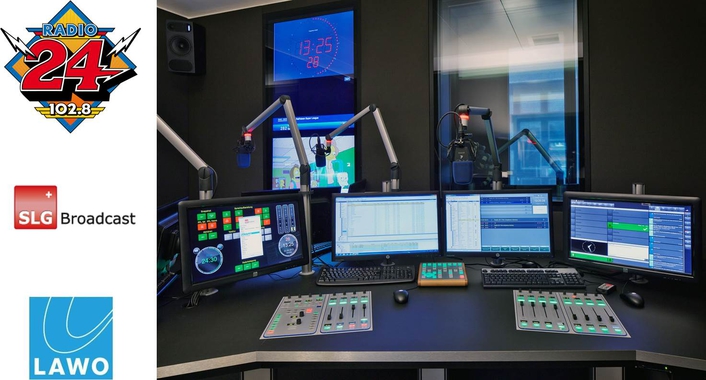 Regarded as a “most modern studio” at the beginning of the 1990s, the privately operated radio station had outgrown its old location by 2012, and was no longer at the cutting edge of technology. Since then, the “Löwenbräu” Area of Zurich has provided an ideal new space – not more than 1200 feet from its old location. Here, SLG constructed an entire studio complex at the beginning of 2013 in the time-honored “blue hall” in the Löwenbräu Area. In a record-breaking construction period of just two months, two state-of-the-art broadcast studios and associated equipment rooms were built, plus 24 editors’ workplaces, some with an audio-over-IP connection. Rounding out the facility, is a layout studio and a stage for small performances, a digital-signage-system for TV and informational, displays and an automatic camera system for webstreaming.

Both studios are identically equipped, using Lawo sapphire mixing consoles. These are each fitted with 12 faders and include a central module that can be operated by the host. Additionally, each desk is complemented by an additional 4-fader module for the news presenter or co-host, each with its own overbridge and configurable touchscreen. In the production studio, a Lawo crystal was installed to mix live performances on the stage and record them to a Pro Tools DAW. The crystal and the DAW are both connected to the central router via MADI.

It was also possible to include the station’s OB-van in the new facility. Built six years ago as a VRS (Virtual Remote Studio), this has been incorporated into the new technical environment by adapting its software. VRS enables the hosts and technical staff to access services in the broadcast studio from a remote location, as if they were present in the facility. Reference monitoring is taken care of using PMC “twotwo” loudspeakers.

Radio24 on Facebook and Twitter
For telephone phone-ins, Radio 24 uses an extensive Broadcast Bionics PhoneBox installation, which handles all call routing and messaging as well as social media integration.
Studio 1 is equipped with four HD-SDI-cameras, with the vision mixer able to switch the right camera onto the webstream – triggered by the fader position of the Lawo consoles. Through this feature, visitors to the Radio 24 website can watch what is happening in the studio.

Marc Straehl from SLG Broadcast: “The technical solutions for radio are so advanced that we were able to provide open workspaces, integrate moving pictures and audio, and route the program via mouse-click to different distribution paths. Thus, Radio 24 is able to produce programs in a global and modern way, not only using the phone but also the social media streams that are available at the host’s console. And although the station produces global programming, it remains close to the people of Zurich.”

In addition to the PhoneBox system and a multitrack editor, five of the 24 editors’ workplaces have complete IP-connection to the Lawo router, including intercom access to all studios. Thanks to the Lawo JADE virtual audio control center, routing for phone interviews, multitrack editing and intercom is always readily accessible at the editors’ workplaces. JADE takes care of the connections between all of the audio streams within the PC – something that has not been available before – and presents them on operator friendly buttons without the need for the editor to go into the details of the routings.

Huge TV monitors – soffit-mounted in the walls horizontally and vertically in the studios and control rooms – display up to three different sources on split screens. These cover everything from digital TV output to websites and VisTool pages, which are shown with level or status information of the consoles or the studio clock.

Marc Straehl has the bottom line on the project: “Radio 24 has leap-frogged two generations of technical progress, and is really at the edge of technology, now.”

About Radio24
Radio24 is the first and mostly popular private radio in Switzerland. As early as 1979, Radio 24 was making pirate broadcasts from Italy to Zurich with the most powerful VHF transmitter available. It was not before 1983 that the station was granted a concession to broadcast legally from the Üetliberg, close to Zurich. The station – which hosted the “most modern studio in Europe” after changing location in 1993 – recently moved to its new home in the “Löwenbräu”-Area in Zurich.

About Lawo
Lawo designs and manufactures pioneering audio and video technology for TV and radio broadcast production, post-production, as well as live performance and theatrical applications. Products include digital audio mixing consoles, routers, video processing tools as well as IP-based video and audio transport solutions. All products are developed and manufactured according to highest quality standards at the company’s headquarters in the Rhine valley town of Rastatt, Germany.