.
Digital mixing console sales have increased dramatically since their introduction in the 1990s. Yamaha sold more than 1000 PM5D mixers in the first 15 years and other manufacturers are seeing increasing sales of their digital products. Digital mixers are more versatile than analog ones and offer many new features, such as reconfigure signal routing at the touch of a button. In addition, digital consoles often include processing capabilities such as compression, gating, reverb, automatic feedback suppression and delay. Some products are expandable via third-party software features (called plugins) that add further reverb, compression, delay and tone-shaping tools. Several digital mixers include spectrograph and real time analyzer functions. Some incorporate loudspeaker management tools such as crossover filtering and limiting.

Calrec
Calrec’s large presence in the domestic remote–broadcast-audio market underscores a growing line-up of consoles. The Apollo’s control surface incorporates Bluefin2, the second generation of Bluefin high-density signal processing, which provides Apollo with 1,020 channel-processing paths, 128 program busses, 96 IFB/track outputs, and 48 auxiliaries. In addition, Apollo has a second dynamics section in each channel, more than 70 minutes of assignable delay, and three independent AFL/PFL systems for multiple-operator use. The control surface manages all these channels over 12 layers and up to 320 physical faders. With single- and dual-fader options, Apollo has a higher fader density within its footprint than any other console.

In addition, the Calrec A/B path-selection system is retained for those users who wish to use the desk in a similar manner as Calrec’s Alpha platform products. Layers and the A/B path system can be disabled if not required. Featuring full-color displays and touchscreens to provide high-resolution feedback of function and status, the Apollo control surface also has light-emitting knobs that change color depending on function for immediate recognition. The surface can be configured into different operational settings to suit the operator. Based on the Apollo platform, smaller sibling Artemis uses the same Bluefin2 and Hydra2 core technologies. Combining full-color displays, touchscreens, and light-emitting knobs, the soft Artemis control surface provides instant visual feedback and the flexibility to reconfigure the desk on the fly. It’s available in three sizes: Bluefin2 gives Artemis Shine 680 channel-processing paths, Artemis Beam 340, and Artemis Light 240, with up to 128 program busses, 64 IFB/track outputs and 32 auxiliaries. Artemis Light packs all this into a 4RU enclosure. An integrated router means that all I/O functions can be performed by Hydra2, using high-capacity 8,192-squared crosspoint routers and a variety of I/O units. Hydra2 is Calrec’s audio-routing system. Its plug-and-play architecture means that connecting consoles together is as simple as connecting their routers, with a single connection between routers providing 512 audio signals in both directions and enormous network expansion. The router does not require an entire console system to function, so complex networks can be created with minimal cost. Based on 8,192-squared router modules, Hydra2 allows connection of audio sources and system components over copper or fiber, with signals routed to any consoles or I/O boxes on the same network.

The modular SD-Rack can be configured with everything from analog to AES, Aviom, HD-SDI, Dante, and more. Sources can be injected directly into another console’s monitor matrix, allowing monitoring of any source on the network without using additional DSP channels. 5.1-surround inputs can be stacked onto a single fader, linked, then folded, and unfolded on the surface with the touch of a button. Assignable macros facilitate such functions as fader-start and -stop commands, as well as snapshot scene recall. New for 2012 is a series of processing expansion packages. Nitrous for the SD10B adds such features as a new de-esser with sidechain listen on every input channel, an expanded 16×16 matrix and expanded FX section, and expanded dynamic EQ and multiband compressors. Pricing for the SD10B starts just under $100,000. The newer SD9B and SD11B offer flexibility in smaller packages. With 48 and 32 mono and/or stereo channels respectively, the SD9B and SD11B use the same large touchscreen and processing engine as the SD10B and can now be integrated into the same Optocore network. The ultra-compact 12-fader SD11B is rackmountable, and the SD9B doubles up at 24 faders in a desktop package.

Lawo
The mc² Series mixing consoles (mc²90, mc²66MKII, and the new mc²56) provide timecode (dynamic) and snapshot automation of any parameter in the system, combined with a high degree of flexibility inside the channel structure, bussing, and router to accommodate any production requirement from monaural to 7.1 surround sound. These consoles offer integration with such systems as Pro Tools, Pyramix, Sequoia, Sadie, and others. 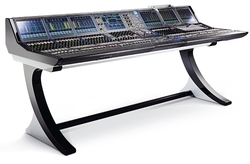 Features of the operating system include loudness metering for every channel, DSP 5.1 upmix module AMBIT, and downmixing. Embedding/de-embedding can be achieved via the new video line of products V_Pro Eight. Additionally, Ravenna, a solution for real-time distribution of audio and other media content in IP-based network environments, is now supported. The mc² Series mixing consoles also provide direct-out mute by fader, a bus-reverse page, HTML error diagnostics, and timecode edit for the timecode automation and libraries of the audio settings. To streamline workflow, the system offers offline and online external GUI operation. Snapshots and productions can be prepared and used to bring the console online for two or more operators. With the optional plug-in server, any VST application, such as multiple Dolby E decoders, are available with all parameters and metering displayed on the console’s GUI. Additionally, the mc² series consoles are able to quickly modify their settings for conversion to a broadcast console for news, sports, and entertainment

The Aurus flagship multiformat production console is available in 16-96 faders and 300 DSP channels with 128 busses. It works in 5.1 and 7.1 surround, and stereo and mono can be done simultaneously with on-board downmix/upmix capabilities separate multiple bus configurations. The console offers full motorized fader dynamic automation and editable snapshot and scene automation. The Crescendo mixing console is a response to increased demand for a slimmed-down control surface and price but with the DSP power available in the larger Aurus when needed. All controls are within easy reach for a seated operator. Snapshot automation is extensive with ability to set glide times between snapshots for enhanced audio-follow-video control. AFV muting and levels changes via external control is readily available through the NEXUS Logic system.

Studer
Following on from the Vista 5, 6, 7, and 8 desks, the Vista 9 supplements Studer’s Vistonics interface with widescreen-based TFT metering, FaderGlow, and other innovations. The new metering offers precision feedback on signal status.

The channel meters are able to show mono through 7.1-channel signals in the upper section of the screen, while the lower portion can show bus assignment or, for surround channels, an image of the surround composite, providing a comprehensive display of the surround signal. Alternatively, HISTORY mode records such events as overloads in the audio path of each channel, highlighting them in red on the channel waveform. The operator can then review which channel had such an event, up to 30 seconds after the event has occurred. All stereo inputs and stereo masters have a correlation meter bar above the bar-graph display. The Control Bay meter section can be configured to show any choice of output busses and input channels and displays up to 40 meters at the time. Each touch-sensitive TFT screen shows 10 channel  strips, with rotary encoders and switches mounted directly onto the screen, providing the operator with “Where you look is where you control” ergonomics.

Yamaha
The pursuit of perfection is ongoing and will probably never end, but along the way Yamaha has introduced a number of innovations that have become industry standards offering performance and familiarity that discerning users continue to demand. By definition, “standards” are best kept as they are. With evolutionary refinements, of course. 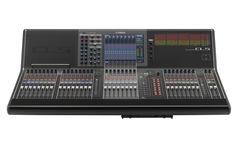 Yamaha CL series digital mixing consoles represent a new level of refinement. They offer an evolved experience in accessible mixing, plus sonic purity with sound shaping capabilities that will give the most imaginative engineer unprecedented creative freedom. The CL series embodies the leading standards in live sound in their most advanced, most expressive form. Network capabilities are rapidly becoming fundamental and indispensable in today’s fast-paced world of digital live sound. CL series consoles feature separate console and I/O rack components that communicate via the Dante™ network audio protocol, allowing fast, efficient design and deployment of capable systems from the most basic to the dazzlingly complex. The ability to add Lake® processing via expansion slots also adds to the system’s versatility and adaptability to the widest range of mixing needs. Every engineer, artist, and audience agrees that sound quality is the bottom line. That’s a given. Through thorough analysis, review, and refinement of every detail of the circuitry and technology used, Yamaha CL series consoles deliver naturally superior sound plus a comprehensive range of “coloring” options that give the sonic craftsmen who will use them extraordinary creative freedom. The signal processors provided are plentiful and of the highest quality, including extraordinary Portico 5033/5043 EQ and compressor devices that bring Yamaha VCM technology together with the legendary talents of Rupert Neve. The platform is pure and natural, so the engineer can create and deliver the ideal sound.