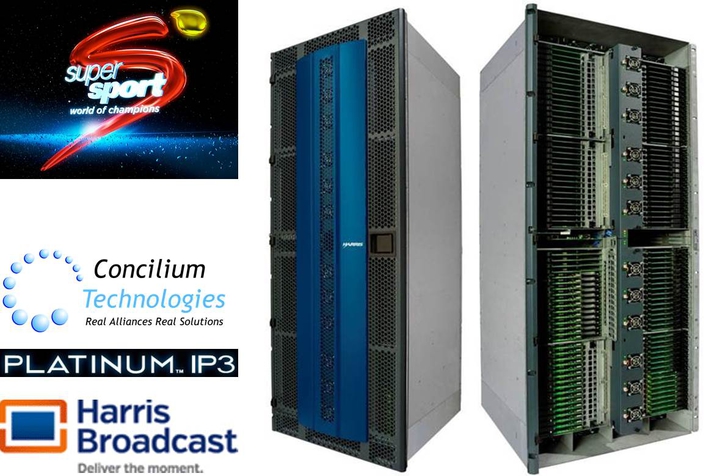 “Although we are just a few months into our usage of the Platinum IP3 router, we already can see that speed of operation, ease of operation, ease of resource assignment and operational reliability are all evident in this new design router,” said Eddie McAlone, Technical Director at SuperSport. “The Platinum IP3’s frame synchroniser capabilities have had a significant impact on our operations. What this means is that we have been able to hook together the new and old buildings and come straight on to the new router from the old building without any need for external hardware and glue products. The frame synchroniser reduces the hardware count, simplifies the system architecture and thereby increases system reliability in the long term.”

An integral part of SuperSport’s Project Argus, the broadcaster is transitioning programme playout into an entirely new state-of-the-art facility that started with 32 new HD channels. All of its SD and HD channels will eventually be played out from this new building. Earlier this year, SuperSport integrated a single frame Harris Broadcast Platinum IP3 Router, and within a few months placed an order for a second frame, which will tie together to create a 1152 x 1024 matrix.

“Concilium Technologies has a strong and long-standing relationship with SuperSport and together we three companies are demonstrating the powerful and elegant capabilities of this new and radically different router design,” said Mathias Eckert, vice president sales and services, Europe and Africa at Harris Broadcast. “For Africa’s leading sports broadcaster to have ordered a second router so swiftly is the strongest illustration possible that we have a game-changer in the Platinum IP3.”

SuperSport is the leading provider of pay television sports coverage across the African continent. It is owned by the MIH Group and are carried on the DStv satellite platform. SuperSport has by far the largest variety of sports of a single sports broadcaster in Africa. This includes most of the major sporting events and leagues of rugby, cricket, football, golf, tennis, motorsport, cycling, boxing, wrestling and athletics. We are the world's biggest broadcaster of live rugby and cricket and also the world's biggest UK soccer Premier League broadcaster, broadcasting every match live and, where possible, in HD through the Premier League's Content Service. Apart from its satellite channels, SuperSport also feeds content to M-Net, CSN and M-Net HD.

Concilium Technologies (Pty) Ltd. is a wholly owned and empowered South African Company. The company is an established and trusted solution provider specialising in Test & Measurement, Broadcasting and Telecommunications. Concilium provides a complete product experience through the winning combination of an extensive range of solutions from leading suppliers and an ability to deliver effective local value added services around them, with the belief that it’s the people that deliver the difference. Concilium services the sub Saharan African region from its offices in Centurion, South Africa and is a certified ISO 9001:2008 facility.

Harris Broadcast is a market leader in Content Management and Network Infrastructure serving more than 3,000 broadcasters, cable networks, MSOs and mobile and IPTV providers spanning 140 countries.  Harris Broadcast has been awarded 240 patents and has received eight Emmy Awards from the National Academy of Television Arts and Sciences.