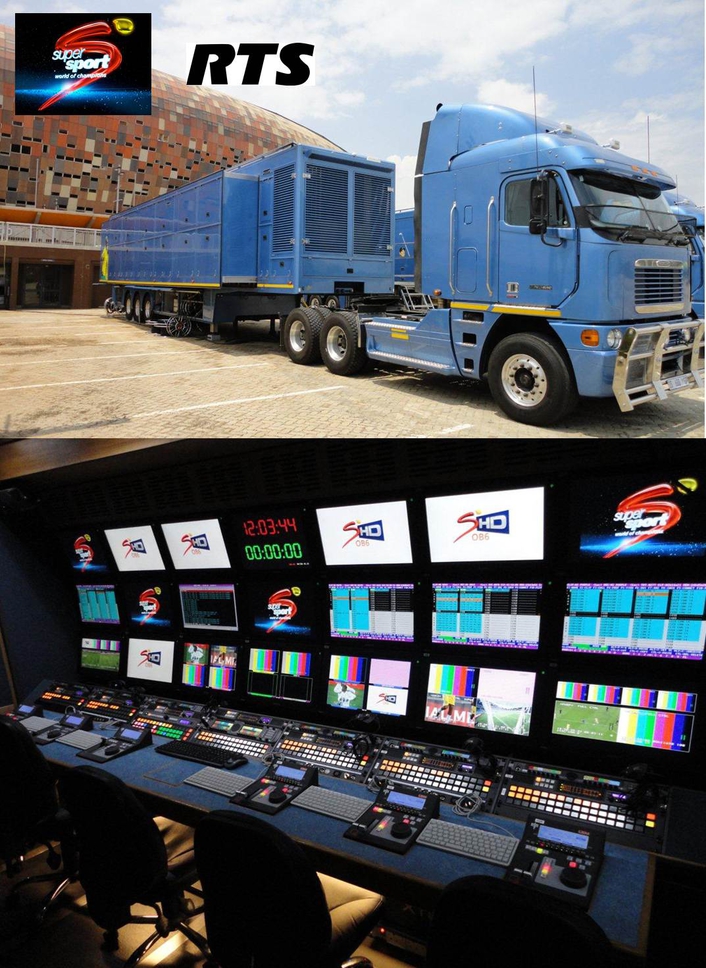 The HD truck will be used for live sporting transmissions and mobile television productions
With no fewer than 24 channels, SuperSport, a subsidiary of the MIH Group, is the leading sports broadcaster on the African continent. Its programming, which can also be seen in neighboring sub-Saharan countries, includes sporting events from all over the world, broadcast 24 hours a day, seven days a week.

To meet not only the present but also the future expectations of its viewers, SuperSport recently invested in a new HD outside broadcast truck: the OB6HD, a high-end vehicle in every respect and one with exceptional capabilities, thanks to the lavish array of high-tech equipment on board, not least among which are its 28 high definition cameras. The design and implementation of the installation was the work of Sony PSE (Professional Solutions Europe) at their premises in Basingstoke (UK). SuperSport's new reference vehicle will be used primarily for the live transmission of sporting events.

A decisive role in the fulfillment of this mission is played by its communications equipment, and here SuperSport's decision-makers, together with Sony South Africa, opted for a solution from RTS/TELEX. The nerve-centre of the installation is a 144 x 144 Advanced Digital Audio Matrix (ADAM) from RTS linked to 29 KP12 CLD, eight KP32 CLD and six DKP16 CLD keypanels. 42 MCP-90-12 microphones, 52 headsets from the MH-300 and MH-402 series, as well as three BTR-800 base stations, and 12 TR-800 belt-packs secure communications both inside the rolling high-tech control room and out.

"The customer and ourselves quickly agreed that we wanted to use systems from RTS/TELEX," explains Gerhard Strydom, Sony South Africa's Broadcast Sales and Marketing Manager. "The quality of their products is exceptional! You can rely one hundred per cent on their systems, which in the world of outside broadcasting is the paramount consideration – after all, replacing an intercom system is hardly as simple as changing a tire. By the same token, RTS/TELEX's after sales support is equally excellent!"

OB6HD has already passed its first tests with flying colors as Prishen Govender, Unit Supervisor OB6HD, Supersport Outside Broadcast confirms:  "The first impression of the RTS/TELEX CLD range at IBC 2010 was great. It had a slick and appealing look and some nifty new keypanel features. After nine months use of the ADAM frame and CLD keypanels, I believe that RTS/TELEX have found a sweet spot between high end programming and user friendliness in the Outside Broadcast industry. Particularly their RVON (voice over network) system is my favorite as I use it on a daily basis. RTS/TELEX has certainly left a good mark in OB6HD from an operation and technical perspective.”  “So good”, adds Strydom “that SuperSport has already commissioned Sony to equip its next truck, the OB4HD – again with equipment from RTS/TELEX."

About SuperSport
Along with MultiChoice Africa and M-Net, SuperSport is a subsidiary of the MIH group and belongs to the multinational media company Naspers. SuperSport was founded in 1987 as part of the M-Net enterprise but in 1995 transformed into an independent brand. With its slogan 'World of Champions', SuperSport offers the widest selection of sports channels in Africa. As well as some that cover a miscellany of events, the SuperSport portfolio includes specialist channels devoted to rugby, cricket, soccer, golf, tennis, motor sports and athletics.