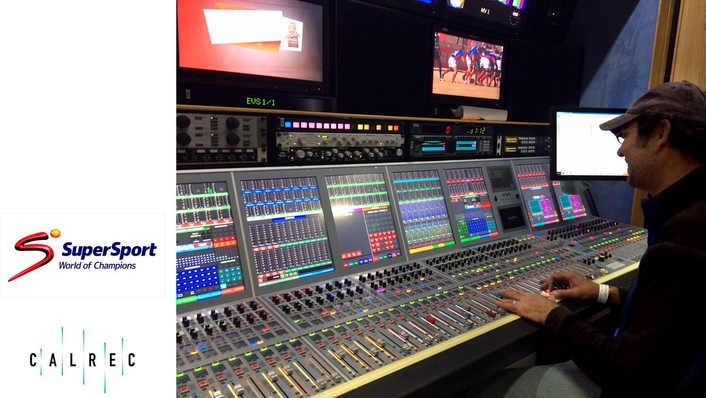 Reliability, Fiber Connectivity, Ease of Use, and Frame Size Are Key Benefits for Longtime Calrec Customer
South African outside broadcast (OB) company SuperSport Outside Broadcast, formerly known as M-Net Outside Broadcast, has installed a new Calrec Artemis digital audio console in its new OB truck, OB1HD. The move comes as SuperSport upgrades its fleet from SD to HD to meet the growing demand for HD content. This installation marks the last truck in the fleet to migrate to HD.

"From our first installation in 2006, we have worked with Calrec and have standardized our South African fleet on it. Calrec consoles not only meet our technical requirements for reliability and fiber connectivity in a compact footprint, but also are easy for our operators to learn and use because the layout is similar from one desk to another," said Johan van Tonder, technical operations manager at SuperSport Outside Broadcast. "Fiber connectivity has given us greater versatility and has drastically cut down on rigging times, both of which save money. In terms of the ability to attract business, Calrec is well-known throughout the broadcast world, so the product speaks for itself."

The size of the desk has been especially beneficial for SuperSport because of the limited space inside the truck. The frame houses all the sophisticated functions needed for live sports television yet still fits within the confines of an OB truck. Fiber connectivity has also been especially useful because, as OB trucks get pushed farther away from fields of play, fiber is the only way to transmit the signals.

Reliability and support are also important factors in SuperSport's continuing relationship with Calrec.

"With Calrec, support has never been a problem, and advice has always been readily available. We have always felt we are a valued customer and that they care about this relationship," van Tonder said. "Even better, we have never had to take a unit offline due to a Calrec failure. When there have been technical glitches, Calrec has dispatched replacements straight away so that we could avoid downtime. The consoles we installed in 2006 are still running smoothly."

OB1HD, which mainly covers sports content, rolled out in May. The unit's first assignment was to cover a Premier Soccer League match between SuperSport United and Polokwane City.

"SuperSport covers some of the biggest sporting events in Africa and the world, and it is a major source of sports content for people across the African continent," said Anthony Harrison, Middle East and Africa sales manager at Calrec. "This is the third 64-fader Artemis console for SuperSport, bringing their total to six Calrec consoles across the fleet. The fact that they continue to use Calrec desks and have invested in the Apollo and Artemis range is a strong vote of confidence in the value of the consoles."