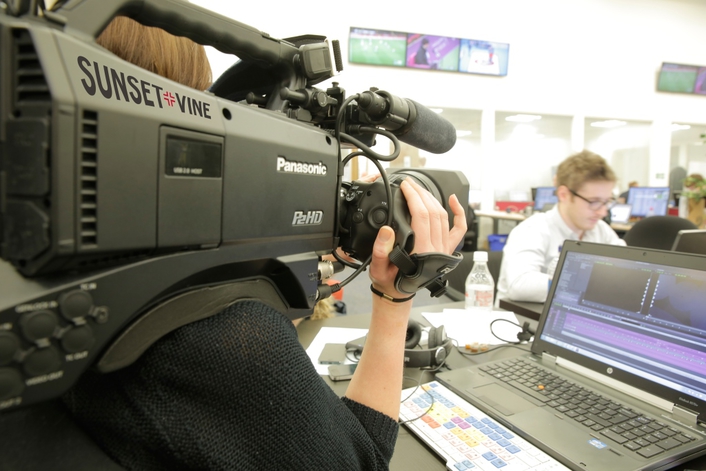 .
Sunset+Vine, an in-house production partner for BT Sport, is the first UK broadcast company to invest in the latest range of Panasonic ENG and handheld cameras.

The new Panasonic AJ-PX5000 and AJ-HPX270 cameras allow Sunset+Vine to combine high-end image quality with cost-efficient operation. The cameras will be used on next year’s Commonwealth Games for the BBC as well as Barclays Premier League and Aviva Premiership Rugby for BT Sport.

The new PX5000 ENG style camera has already been deployed on a number of productions. Mark Dennis, Director of Technical Operations for Sunset+Vine, said, “Panasonic’s P2 Technology was a significant factor in our decision to buy these cameras. Its versatility, reliability and simultaneous recording enables safe, secure backup across two cards.”

The PX5000G meets the new needs of broadcasting in a networking age, and sets a new standard for ENG. In addition to conventional P2 card slots, the PX5000G is the first camera recorder to offer a microP2 card slot which dramatically reduces media costs.

Nigel Wilkes, Broadcast Group Manager at Panasonic, commented, “We’re delighted to be working with Sunset+Vine, through one of our dealers BPS. Their relationship with BT Sport is one of stature and we’re proud that our cameras, and our AVC Ultra codec, will play such a significant part in their broadcast workflow. This deal cements Panasonic’s position as the leading camera provider in UK sports broadcasting.”

Andy Beale, Chief Engineer at BT Sport, said, “The AVC Intra codec helps us to get our content to air quickly, which is essential in a 24/7 sports environment. As the first fully DPP compliant broadcaster, BT Sport has deployed a transcode free end-to-end AVC workflow.”

About Sunset+Vine
Sunset+Vine jointly produced all of Channel 4's 2012 Paralympic Games output (winner of 2013 BAFA Best Sport Production and RTS Special Award) and was the only independent production company appointed by the BBC for the London 2012 coverage, producing the sailing from Weymouth.
Internationally the company has been the Host Broadcaster of The Dubai World Cup since 1997, host broadcast the last ISAF World Sailing Championships, and has produced and distributed two Volvo Ocean Races. Sunset+Vine will be the Host Broadcast partner for the 2014-2015 Volvo Ocean Race.

We are also leaders in international Advertiser Funded Programming with the world's most watched weekly sports show "Gillette World Sport" (shown in 180 countries) and Mobil1The Grid among our extensive portfolio.
Sitting alongside our sports production division is Sunset+Vine New Media, Sunset+Vine International and Sunset+Vine Television News.
We have offices in London, Cardiff, Oxford and Glasgow which enable us to deliver regional and national programming. Awarded the Queen's Award for International Trade in 2003, Sunset+Vine has direct access to over 260 broadcasters worldwide across all media platforms.