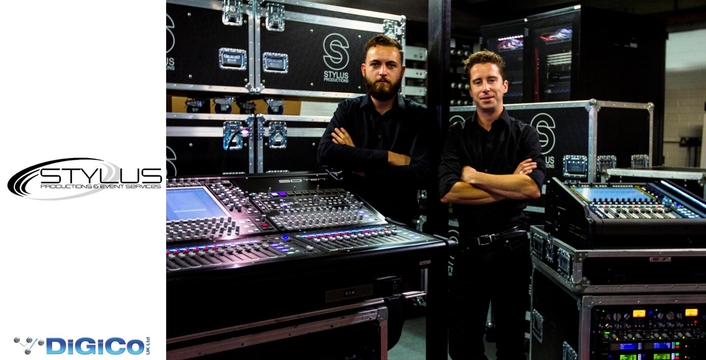 Stylus Productions is a new, London-based company providing production management services and pro-audio rental. Founded in 2016 by Sam Thomas and Oliver Weeks, the company delivers a comprehensive service for the touring and live events industry and has an uncompromising approach to technical excellence. In line with this, all its hire stock is of the highest standards, which is why it has recently invested in DiGiCo mixing consoles, adding an SD10 and SD11 to its inventory.

“As a young company entering a competitive marketplace, we knew from the outset that we had to carry an inventory with maximum functionality and flexibility; systems that are powerful and applicable to a varied client base,” says Sam. “This made DiGiCo the obvious choice when looking at consoles.”

“We approach things very much from an engineers’ point of view, and try to devise solutions that will best suit their individual needs in demanding real-world scenarios, whether that be headline touring, festivals or corporate project delivery,” adds Oliver. “This usually involves designing bespoke and modular solutions tailored to the specific project. Maximum capability and functionality were two key points for us, as we never want to find our equipment unable to meet the demands of the client.”

Sam and Oliver have found the combination of the SD10 and SD Rack to be one of the best all-round packages available to the industry, offering the right balance of sound quality, versatility and all round control, whether deployed at FOH or monitors, whilst the SD11 is perfect when space is at an absolute premium.

“When you’re looking for a compact surface, it’s hard to see beyond the SD11, which offers features that other similarly sized boards don’t. Channel count and sound quality alone are hard to compete with,” continues Sam. “For such a small, affordable desk, the functionality and familiar operation make it perfect for small to medium touring projects where footprint and budget are of concern. However, budgetary constraints need not detract from the quality of production thanks to this desk.”

Having the option to easily expand systems to incorporate additional SD Racks and other surfaces via the HMA Protocol is yet another feature that attracted Stylus to DiGiCo consoles from the very beginning.

Both consoles have been out almost continuously since Stylus Productions took delivery of them, with the SD10 being the bedrock of the monitor system for multi-platinum selling, internationally acclaimed touring artist BIRDY throughout her Beautiful Lies album campaign. Later this year, it will go on to become an essential part Good Charlotte’s touring package when they headline theatres in the UK this autumn.

“The SD10 and SD11 have demonstrated their power and versatility right from the off, featuring in audio systems for our corporate clients as well as touring artists, whilst also proving very popular surfaces in the dry-hire market,” says Sam. “With over a 12 years’ experience mixing live sound, Oliver is well acquainted with the SD Range from DiGiCo and we’ve found it straight forward to get the best out of our consoles thus far.

“As we look to the future, we will continue to take advantage of the training DiGiCo offers to get our junior staff up to speed, as well as expansion to include the new and exciting capabilities of other consoles, such as the recently launched SD12.”