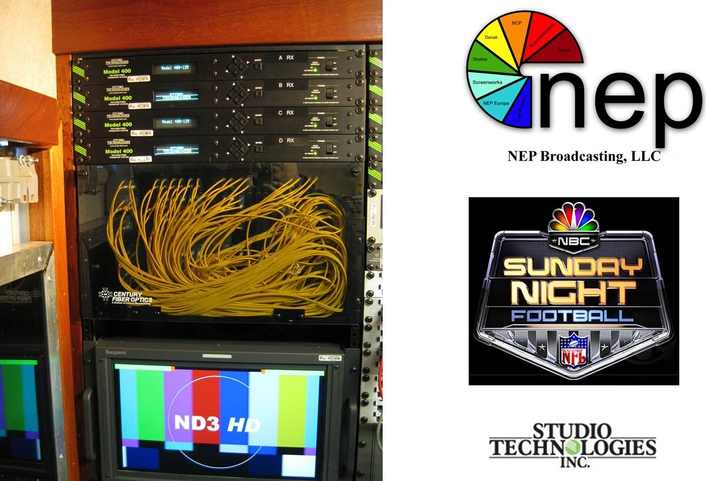 NEP Broadcasting is a leading international provider of outsourced teleproduction services for live sports and entertainment applications, specializing in digital capture and transmission of events ranging from professional football and the Olympic Games to the Academy Awards and everything in between. The recently purchased Model 400 units have been integrated into a second production truck covering the national Sunday Night Football broadcast.

“We created an additional production truck for Sunday Night Football because of the space restrictions within existing truck compounds,” says George Hoover, chief technology officer for NEP Broadcasting. “HD video has an effective transport link of about 300 feet on copper, but, for this application, we needed the ability to potentially go several thousand feet away from our main production truck. The only option was optical fiber. Based on our positive experience with deploying Studio Technologies’ units on a number of other projects, including almost 60 percent of NFL games, we selected the Model 400 to serve as the video interconnect backbone for this additional trailer. The Model 400 is a highly reliable, versatile tool that gets the job of supplying programming to our clients done. We currently deploy over 30 Studio Technologies systems.”

NEP’s new trailer provides the technology that generates the virtual signage, lines and images that float on the field. It also handles the transport for all of the wireless and RF cameras between where they are received, processed and handed off to the main truck. The trailer also houses all the transmission hardware to get the signal back to the broadcaster. Reliability was extremely important because every camera and the outbound transmission path flowed through this fiber backbone. If the fiber system went down, game over. 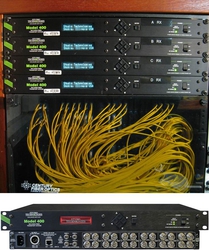 The Model 400 SDI-Over-Fiber Transport System is a high-performance, cost-effective, rack-mount system for distributing digital video signals over short and medium distances. The system is compatible with all common broadcast serial digital video formats and is suitable for use in remote trucks, live-event video distribution and fixed links associated with broadcast and production facilities. The Series 400 offers 12 format-independent SDI data paths over four single-mode optical fibers supporting 3G (SMPTE 424M), HD (SMPTE 292), and SD (SMPTE 259M) SDI, as well as DVB-ASI. Fiber transport is based on the SMPTE 297 standard.

“We started working with Studio Technologies three years ago on a multi-channel fiber transport system and the 400 was the result,” Hoover states. “We’ve never had a failure in all 30 systems supported right now. The unit has a very good status, alarm and monitoring system, so if you’re having issues, you are warned about them before they become total failures. We also needed to effectively reduce the fiber count between the trucks. We have about 48 signal paths going back and forth, so we wanted to reduce that down to a manageable number of fiber optic cables just to ease the setup. Every aspect of the Series 400 helps us to flawlessly deliver the game from the opening kickoff to the victorious team running onto the field, providing superior service to our clients.”