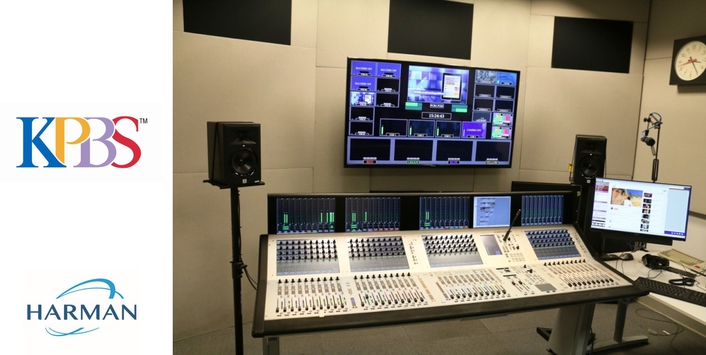 Located on the San Diego State University campus, KPBS Public Media operates three media organizations out of a single production facility, including NPR radio station KPBS-FM, PBS television station KPBS and the online news website KPBS-Digital. With so much media being created under one roof, KPBS needed a broadcast mixing solution that would streamline production and enable the separate news divisions to seamlessly share original content.

After careful consideration, KPBS made the decision to replace its legacy digital mixing console with a complete Studer by HARMAN broadcast audio mixing solution. The new Studer mixing system enables KPBS to unify the recording and production workflows across the entire facility, efficiently mix a wide range of productions and quickly share media between the television and radio stations.

The new KPBS broadcast mixing system includes a Studer Vista V console with a fully redundant Infinity Core 400 processing engine, 5 Studer D23M I/O Systems and 5 Studer Compact Stageboxes deployed throughout the facility, enabling the different studios to record audio using the system’s DSP processing. Finally, a Studer Vista Compact Remote Bay is deployed as an extension of the Vista V, which provides additional redundancy and allows KPBS staff to control the console from any of the other studios or newsrooms.

“The Vista V mixing solution gives us incredible production flexibility across all of our studios and newsrooms,” said Leon Messenie, Director of Engineering at KPBS. “If the radio station wants to record something in their performance studio, we can easily accommodate the microphones directly into the Vista V system. The Studer system also allows us to combine a wide range of audio sources on the same network so that all of our media is available to all of our production teams—no matter what surface they’re using. The flexibility and seamless networking between studios was a big selling point for us.” 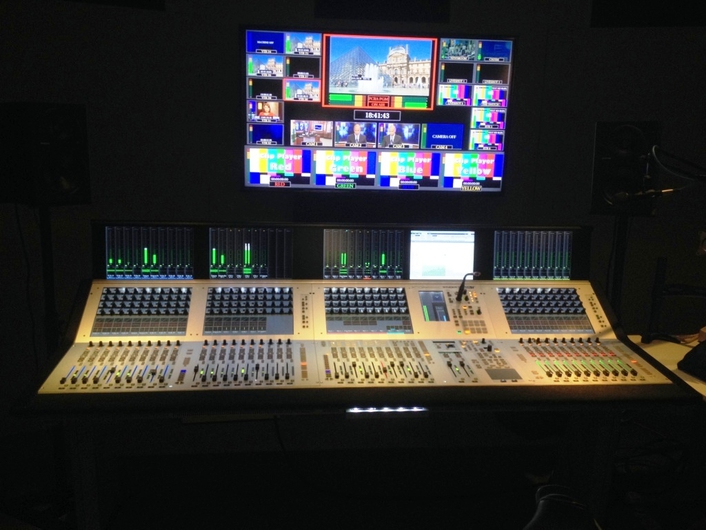 Studer solutions are I/O agnostic, which enables the Vista system to accommodate any I/O standard. At KPBS, the Vista V console is augmented by 5 D23m I/O systems with with various I/O card configurations, including 35 embedder and de-embedders that allow production teams to strip audio from up to 35 separate video streams. The radio station can use audio pulled from a video stream to create soundbites for radio show, and the TV station can use the embedders to combine audio clips with a video stream. Media assets are shared instantly between the radio and TV departments using audio over IP networking, which is facilitated by a Liveware card in the D23m.

“The KPBS television station does a lot of production for our radio station, and both departments are constantly sharing audio soundbites back and forth,” shared Messenie. “With the Livewire integration in the Studer system, the television station has access to all of the KPBS radio sources, and the radio station has access to all of the KPBS television sources. We could be on the air doing a story for PBS NewsHour, and radio can use the audio feed to create soundbites. With the Livewire connection on the Studer console, both stations can access the audio instantly—even from mobile productions in the field.”

With a live televised nightly newscast and multiple live radio shows, system redundancy is critical at KPBS. The Studer system was designed with multiple layers of redundancy, so that even in the rare possibility of catastrophic system failure, the station will not experience any loss of audio. The Vista V features Quad Star technology, which uses four processors to achieve aviation-standard levels of redundancy in the control surface. Furthermore, CPU-based DSP makes it viable to provide two completely independent DSP cores running in parallel, with instant change over in the event of a problem.

“This is the only audio board for the entire production facility, so we definitely wanted redundancy for the entire system,” Messenie explained. “If we lost audio during our nightly newscast, it would not be good to say the least. The Vista V gives us several layers of redundancy, so that no matter what happens, the show will go on. Even in a worst-case scenario where the entire console surface fails, we can still control one of the system’s cores using the Vista Compact Remote Bay. The Studer system gives us confidence that we can work around any potential issues really quickly.”

The KPBS facility is located on San Diego State University campus, and student interns assist on numerous television and radio productions. KPBS needed an intuitive mixing system with the flexibility to accommodate users with a wide range of skill levels—from professional engineers with decades of experience to student interns who are beginning their careers in broadcasting. The Vista V features Studer's revolutionary Vistonics interface, which provides fast and intuitive control for users of all skill levels. In order to simplify productions for students, KBPS engineers create snapshots for different shows that the students can quickly recall.

The Studer Broadcast Academy also provides KPBS with a valuable teaching resource. Through interactive online courses, students work through lessons and follow along with the provided Virtual Vista software. Students are tested at the end of each lesson, and after all courses are completed, they receive official Studer Vista Online certification. This enables KPBS to ensure that interns know how to operate and control the Vista V system before they ever touch the console in the studio.

“We train students on very simple productions that we create snapshots for,” concluded Messenie. “It’s easier and less intimidating than it would be than if we placed them on a large production with a complex mixing workflow. Plus, the Studer Broadcast Academy lets us train the students on the basic operations of the Studer board before we even let them mix on the board. The entire Studer workflow has been very helpful in our student environment.”