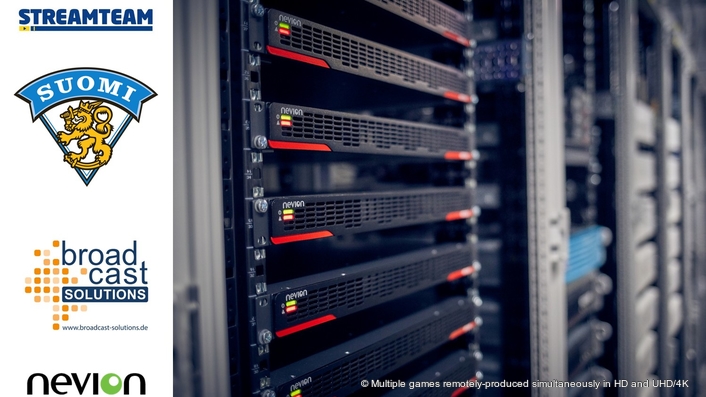 Nevion, the award-winning provider of virtualized media production solutions, announced today that technical broadcast production service provider Streamteam Nordic Oy, has deployed Nevion Virtuoso to help the IP-based remote production (aka REMI in North America) of the Finnish Elite ice-hockey league, SM-liiga.  Nevion’s flagship software defined media nodes are used to transport feeds in real-time from the ice-hockey arenas across the country to the central production facility in Helsinki. Nevion also provided professional services for the network architecture design for the project, as well as for the deployment.

Streamteam was commissioned in December 2017 to produce the coverage for the games by telecom service provider Telia, which acquired the rights for the ice-hockey league in Finland for six years starting with the 2018-2019 season. Streamteam proposed to use remote production for the games, which dramatically decreases the amount of equipment and number of staff needed on location, thereby reducing costs and optimizing the use of production resources.

Streamteam selected Broadcast Solutions to provide the infrastructure for this. The solution went live in time for the start of the hockey season, on September 14, 2018.

On every match day, seven games take place simultaneously across the country. Telia is broadcasting every game on Telia TV, with IPTV and media box, on cable TV, and on mobile, tablet and PC.

The Nevion Virtuosos are used to transport the video feeds from each of the venues to the central production facility, over 10GbE fiber links. For the two highest profile games, the production involves one UHD/4K and fourteen 3G-HD feeds, as well as two return feeds. For the other five games, one UHD/4K, nine 3G-HD and two return feeds are used. Given the number of feeds and the bandwidth available, the Nevion Virtuosos use JPEG 2000 encoding for all the signals. The units are also used to provide SMPTE 2022-7 SIPS (Seamless IP Protection Switching configuration) dual path transport protection.

Roni Kianta, Chief Production Officer, Streamteam says: “The plan to remote-produce all seven games simultaneously on every match day was very ambitious and technically challenging. In particular, it required a comparatively large number of video feeds to be transported reliably from the venues in real-time. The Nevion Virtuosos have been up to the task though.” 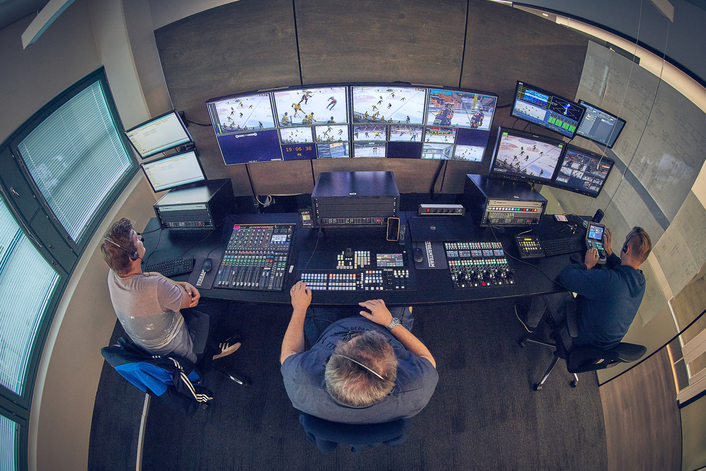 On every match day, seven games take place simultaneously across the country. Telia is broadcasting every game on Telia TV, with IPTV and media box, on cable TV, and on mobile, tablet and PC.

Andreas Dyballa, System Architect, Broadcast Solutions adds: ”Picking the right products was obviously crucial, but like in all such projects, the key to success has been the people involved. In this case, we have had an excellent collaboration between Streamteam, Broadcast Solutions and Nevion’s professional services. In particular, Nevion’s expertise in media network architecture, design and deployment greatly contributed to the positive outcome of project.”

Hans Hasselbach, Chief Commercial Officer, Nevion concludes: “There is a real momentum across the world behind the concept of remote production for live sports, for both economic and practical reasons. We are very proud to have demonstrated once again that Nevion’s products and services are up to the challenge of delivering the transport infrastructure that is needed to make remote production a reality.”

At present Broadcast Solutions is Europe’s biggest OB Van manufacturer. As a hardware manufacturer independent system integrator the company is transferring its experience in the broadcast industry to other demanding business areas. Broadcast Solutions is your competent partner for all technology in the fields of broadcasting, multimedia, infrastructure, engineering or consultancy – video, audio, IP, control systems, digital signage, IPTV, satellite communications and innovative coach building, to name just a few.

As the architect of virtualized media production, Nevion provides network and broadcast infrastructure to broadcasters, telecommunication service providers, government agencies and other industries. A pioneer in media transport, Nevion enables the transport and management of professional-quality video, audio and data – in real time, reliably and securely – from the camera to the home. From content production to distribution, Nevion solutions are used to power major sporting and live events across the globe. Some of the world’s largest media groups and telecom service providers use Nevion technology, including AT&T, NBC Universal, Sinclair Broadcast Group Inc., NASA, Arqiva, BBC, CCTV, EBU, BT, TDF and Telefonica.