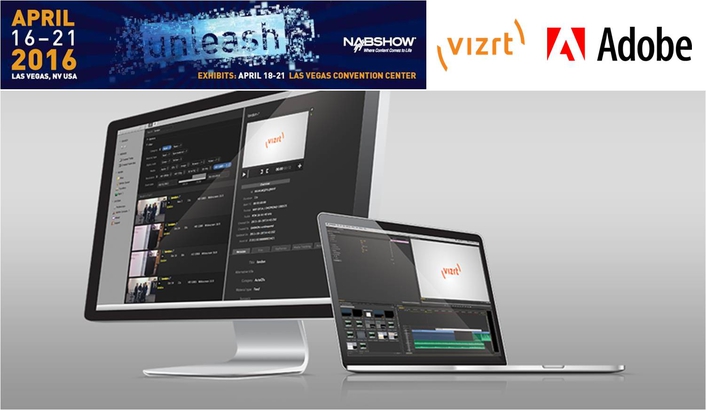 At NAB 2016 Vizrt will demonstrate their latest integrations of graphics and asset management tools together with the Adobe® professional video applications. The new workflows provide an innovative, collaborative graphic and video editing experience employing a new generation of Vizrt panels within the Adobe apps.

Increased editing speed with Viz One
The new Viz One panel is available for the most recent version of Adobe® Premiere® Pro CC and offers new features that speed up recall, playback and rendering of media. Editors gain complete access to media in the Viz One archive. Using the panel, they can search, preview and directly drag in any type of Viz One media, all within the Adobe Premiere Pro CC editing environment. The new version offers significantly faster turnaround time by integrating Adobe® Media Encoder CC and storing media in Viz One during render process. When used together with online editing workflows and SAN Storage in the Viz Engine, the improved integration provides customers with an extremely fast end-to-end solution for editing and playout.

Edit graphics anywhere with Meta-graphics
The same graphics that are used by the editorial staff for online and on-air can be created and edited at any point of the production pipeline, thanks to a new Vizrt Graphics Plugin for Adobe Premiere Pro CC. With it, editors in the editing bay can access the same selection of graphics templates as the journalist in the newsroom. Using Vizrt’s Meta-graphics solution–a non-burnt in workflow for adding graphics to a video timeline–editors can now store their graphics alongside newly edited video and save both to Viz One. The graphics can then be edited at any time in the production process, right up until the point when they are broadcast on-air or published online.

“By combining graphics and video editing in the broadcast workflow, the latest Vizrt integration with Adobe Premiere Pro CC helps save time for editors who need to work with a large quantity of assets,” said Sue Skidmore, partner relations for professional video at Adobe.