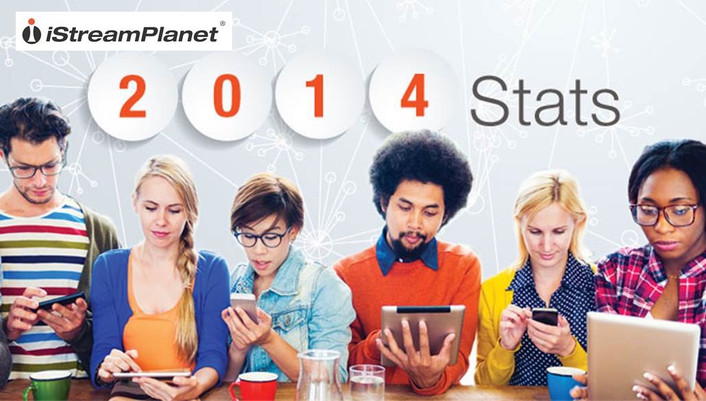 .
Just in time for your 2015 plans, here’s a roundup of the top live streaming video stats from 2014, a year that stands out as the tipping point for multiscreen video.

OTT Viewing Surges
• According to Ooyala’s Video Index, mobile video views doubled from Q2 2013 to Q2 2014, growing from 11% of all online viewing to more than 25%, a 127% increase. Over the last eight quarters mobile share increased more than 400%.
• From Parks and Associates: 10% of U.S. broadband households purchased one of these devices, either a streaming media player or stick, in the first three quarters of 2014, already matching sales from 2013.
• Viewership of traditional television dropped nearly 4% last quarter, as online video streaming jumped 60%, according to Nielsen’s Shifts in Viewing Cross Platform.

Live Streaming Ad Viewing Takes Off
• Freewheel reports 214% growth in live video ad views year-over-year, with live accounting for 21% of all video ad views for Programmers.
• Authenticated ad views on long-form and live content grew 619% year over-year and 38% of long-form and live monetization came from behind an authentication wall.
• According to Adobe in Q2 2014, the ratio of ad starts per video start was 66.0% higher in sports content vs. non sports content, 2.25 ads per video start vs 1.36.
• 82% of live ad views tracked by Freewheel in the third quarter of 2014 were in live sports programming.

Cloud and SaaS Video Services Outpace Traditional Infrastructure
Frost and Sullivan’s Dan Rayburn reports that the M&E video transcoding market is forecast to grow at 20% CAGR, while revenues derived from SaaS and cloud-based offerings are expected to grow at more than thrice this rate.

NBC Olympics’ Productio...e and On-Demand Streaming
What’s Ahead for 2014
Live Streaming Events on ... Acquisition and Encoding