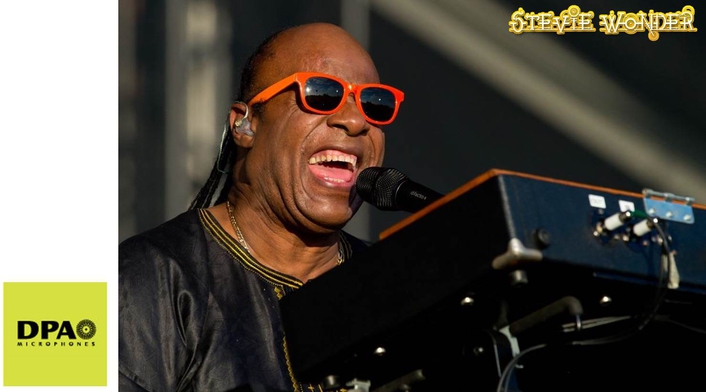 Longtime FOH Engineer for the legendary musician selects company’s d:facto™ Vocal and d:vote™ 4099 Instrument Mics
After a recent summer tour throughout Europe, legendary musician Stevie Wonder’s audio team has something new to sing about; the addition of DPA microphones to his touring rig. On recommendation from Jazz singer Dee Alexander, Wonder’s front of house engineer tested the DPA Microphones d:facto™ Vocal and d:vote™ 4099P Instrument piano microphones while on the road. Now a permanent fixture for all of Wonder’s performances, the mics provide the perfect blend of tone and detail that is necessary for the musician’s wide range of styles.

As Wonder’s FOH engineer for more than 20 years, Danny Leake has had plenty of time deciphering what audio tools are best suited to the musician. Having used DPA’s original 4006 recording mics for Wonder’s percussion section for years, the decision to switch the performer himself to DPA mics was an easy one.

“I still use my original DPA 4006s for the percussion section,” says Leake. “When I finally had the opportunity to try the DPA d:facto Vocal Mic, I jumped at the chance, and I’m glad I did. Along with Dwayne Jones, who handles Stevie’s in-ear monitors, and John “Bugs” Parkinson on band monitors, we all agree it has a bigger and more powerful sound, has good volume before feedback and is also really full on the low-end.”

In addition to the gain features, Leake also noted other effects. “A lot of artists tend to ‘eat’ the microphone, which can alter a mic’s sound because of proximity effect,” he explains. “This doesn’t happen with Stevie because the mic is a few inches away on a stand, but I was still able to tell that the proximity effect of the d:facto was right on point. That was a really cool thing for me in terms of keeping it on track.”

Switching to DPA’s d:facto wasn’t the only change to the performer’s mic setup as Leake also selected a stereo pair of the d:vote 4099P piano mics, which he used on Stevie’s grand piano in conjunction with MIDI. “Personally, I think the MIDI stuff is sort of dry-sounding, but it enables us to sound even with the rest of the band, while still keeping the piano up front,” he says. “The mics are there to add sparkle and realism to Stevie’s sound, because he is a really great pianist. I think the d:votes capture the dynamics of what he’s doing much better than the MIDI does. Compared to our older mics, the d:votes are more open and they sound much clearer. I think they were also able to pick up the piano better because you can position them exactly where you want. It was definitely a better experience for me.”

Leake has now written the d:facto and d:vote mics into the rider for all future shows, guaranteeing that the musician will always be amplified using DPA mics. A veteran sound engineer, Leake is also a past president of EARS – the Engineering and Recording Society of Chicago, an organization of engineers and producers who promote the Chicago Recording Industry and mentor students.

A child prodigy who lost his eyesight as an infant, Wonder signed with Motown records at the age of 11. The winner of 22 Grammy Awards, he has sold over 100 million albums and has had 30 Top 10 hit singles.