The Stereophonics Choose Royer Mics For Their Current Tour 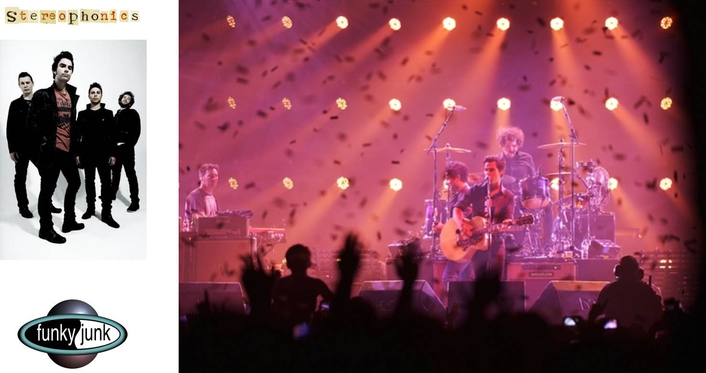 Supplied by Funky Junk, these award winning microphones are helping the band improve the sound quality at their live gigs
The Stereophonics, one of Britain’s most instantly recognisable bands, have just completed a major UK arena tour to promote their new album Graffiti On The Train.

Royer’s R-121 Ribbon Microphone is renowned for its ability to bring an extremely natural and realistic analogue sound to digital recording and live stages. The TEC Award winning R-121L, the ruggedized and more road-worthy ‘live’ version of the microphone, has been specifically designed to withstand the rigours of live touring. Royer won the prestigious 2013 Technical Grammy partly for their R-121, the first ribbon microphone suitable for close-miking electric guitar and other high SPL sound sources.

The microphones were chosen for the Stereophonics tour by FOH engineer Dave Roden who wanted to continue with their ongoing ethos of constant improvement of the overall sound quality at their live gigs.

“I haven’t used Royer R-121 microphones in a live situation before, but the band have used them in the studio and been very happy with the results they have achieved,” Roden says. “I have also heard them being used by other FOH engineers whom I greatly admire, (Jim Ebdon and Marc Carolan for example) and have always been really impressed with the results. I decided to use them, too, in order to up our game.”

Dave Roden was confident that incorporating Royer R-121 ribbon microphones into his live equipment arsenal would help him capture lead vocalist/guitarist Kelly Jones and lead backing vocalist/guitarist Adam Zindani’s individual guitar tones, as well as the raw energy for which the Stereophonics are famous.

“The band members have all moved on to IEM's (in ear monitors) and they were hearing things completely differently to the way they've been used to with wedges,” Dave Roden explains. “In order to adapt, some of the on-stage sources required a more hi-fi approach. This was a challenge for everyone involved, but was a very positive and necessary step in respect to the future performance capabilities of the band, and gave our Monitor Engineer Dave Retson and myself the perfect opportunity to significantly upgrade our mic stock. Both the band on stage and the audience in the arenas were very happy with the guitar sounds they were hearing when we used the R-121L's on the tour.”