The State of ALEXA: An Overview of ALEXA Developments to Date

.
A number of new ALEXA cameras, capabilities and documents have become available in 2012 that combine to make the ALEXA family of cameras the most versatile digital camera system yet.

ALEXA Studio
ARRI ended 2011 by proudly shipping the first ALEXA Studios, and has been building and shipping many more Studios since then. Operators are happy about the optical viewfinder, while cinematographers and directors alike appreciate the 4:3 sensor, which allows the best use of anamorphic lenses for widescreen projects. Upcoming ALEXA Studio movies include World War Z, shot by Robert Richardson, ASC, and Skyfall, shot by Roger Deakins, BSC, ASC.

DNxHD
Software Update Packet (SUP) 6.0 was released in February 2012, enabling DNxHD recording with the purchase of a license from the ARRI Webshop. In addition, there were a number of new features, including color bars, new user button abilities (de-squeeze on/off and Auto White Balance) and new icons in the electronic viewfinder and on MON OUT to indicate an ARRI Look File being active. Smooth Mode is also now indicated in the electronic viewfinder.

DNxHD further increases the amazing flexibility of ALEXA cameras, which feel at home in any production environment. ALEXA cameras are unique in that they are not tied to one proprietary recording format, but support four different output formats, each with various flavors (for example five ProRes codecs with different compression ratios). Thus any production need can be met, from high-end feature film to soap opera.

ALEXA M
In May ARRI will start delivering the ALEXA M, which shines with its ability to fit into places a regular ALEXA could not go. ALEXA M is the ideal camera for 3D rigs, action, Steadicam, aerial, underwater and in general for placing a camera in tight spots such as car interiors.

“World War Z required really fast moves and intense running shots of various kinds, and I have to say that the M was amazing. When I kept the sled very light, with a single battery and a prime lens, it moved faster than anything I have ever seen, including handheld - and with control! Cabling, which is always an issue with Steadicam, was improved immensely with the M, because it was just one tiny little cable. I couldn’t have been happier; I was able to do moves that I didn’t actually think you could do with a Steadicam.” -Larry McConkey Steadicam Operator on World War Z

“The M worked very well in a 3D rig and very well on a Steadicam, but the setup that really showed its benefits was the car. With the M we suddenly had a lot of space in the car, which made rigging easier, especially with the cage that surrounds the camera – you can put it wherever you want. Essentially the M allows elegant solutions in difficult situations and enables new perspectives with no sacrifice in quality. You could use other small cameras for these kinds of shots, but none of them offer this level of quality. You can trust the M because it is an ALEXA; when I take this camera into the fight I know I will win!” -Tom Faehrmann Director of Photography

Learn More
To make all the new ALEXA cameras and features easier to understand, the ALEXA workflow pages on the ARRI website have been updated with tools and educational information. In addition, various new data sheets and white papers, which summarize and illustrate their sometimes complex subjects in a simple manner, can be accessed from the ARRI website Download page at www.arridigital.com/downloads

ALEXA Tomorrow
Preview of New ALEXA Features for 2012: ARRI firmly believes that long product life cycles are the basis of a sustainable business relationship with its customers. At its launch, ARRI promised that ALEXA would be a long-lived camera platform; keeping with that promise, new features are continually being worked on to protect the investment of customers. The new ALEXA capabilities scheduled for 2012 are designed to improve ALEXA's already stellar overall image quality with a new Debayer algorithm that provides even cleaner, sharper-looking images, especially on high contrast edges and in areas with fine detail.

A large number of frequently requested features and user interface tweaks will make ALEXA faster and easier to use in ever more applications. Those include vertical image mirroring for quick low mode Steadicam shots, the ability to post trigger recording, card spanning, compatibility with the Cooke /i system and compatibility with the ARRI Ultrasonic Distance Measure (UDM-1).

These features will be delivered in the form of free of charge Software Update Packets (SUPs) throughout 2012, though exact details and dates may alter as the year unfolds.

In a rapidly evolving marketplace, ARRI can quickly create adapters for the latest cameras to come out - such as the Canon EOS C300, Red Epic/Scarlet, Nikon D800 and Nikon D4 - and allow users to equip them with dependable ARRI functionality. See what the latest offerings are at NAB Booth # C6737. New accessories for NAB 2012 include: 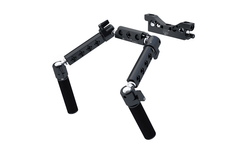 Independent Handgrip System ARRI launches a modular handgrip system that can be precisely adjusted on all axes and attached to any standard 3/8-16 mounting point on base plates, cages and cameras, or directly to lightweight and studio rods by means of two new bridge supports. The handgrip can also function as a handle and is ideal for shoulder setups, with new rosette adapters making it cross-compatible with existing rosette systems.

MBP-3 base plate and Camera Cages The Mini Base Plate MBP-3 offers direct compatibility to the Nikon D4 and can be used with the Nikon D800 through a dedicated adapter plate; it is also adaptable to the Canon 5D Mark III. The MBP-3 accepts 15 mm lightweight rods and switches to studio setups via the classic ARRI BP8/9 bridge plate.

A strong, lightweight and ergonomic cage support system can be attached to the MBP-3 (and other base plates) to provide mounting points for arms and accessories, lightweight rod support, top-handle capability and cable protection. ARRI cages are available for the Nikon D4, D800 and Canon 5D MkIII with a version for the Canon C300 adapter plate coming soon.

MMB-1 114mm Adapter and Filter Thread Rings Two new adapter rings will allow a direct stepdown to 114 mm from the 143 mm and 138 mm backs of the MMB-1. This makes for easier compatibility between the MMB-1 matte box and still photo lenses, cine primes and smaller zoom lenses. ARRI is also releasing a filter thread ring for the Mini Matte Box (MMB-1) and Lightweight Matte Box (LMB-25) to adjust for the new Sony SCL-P11X15 11-16 wide-angle zoom lens and the Sony TD300 3D camcorder.

About ARRI
With headquarters located in Munich, Germany, Arnold and Richter Cine Technik (A&R) was founded in 1917 and is the world's largest manufacturer and distributor of motion picture camera, digital intermediate (DI) and lighting equipment. The ARRI Group comprises a global network of subsidiaries, agents and representatives that covers all aspects of the film industry: design, engineering, production, equipment rental, turnkey lighting solutions, postproduction, film and sound laboratory services, and visual effects. Manufactured products include the groundbreaking ALEXA digital camera system, film cameras, professional camera accessories, cutting-edge LED lighting and DI solutions such as the ARRISCAN and archive tools. The Academy of Motion Picture Arts and Sciences has recognized ARRI technologies and continual innovation with 18 Scientific and Engineering Awards.