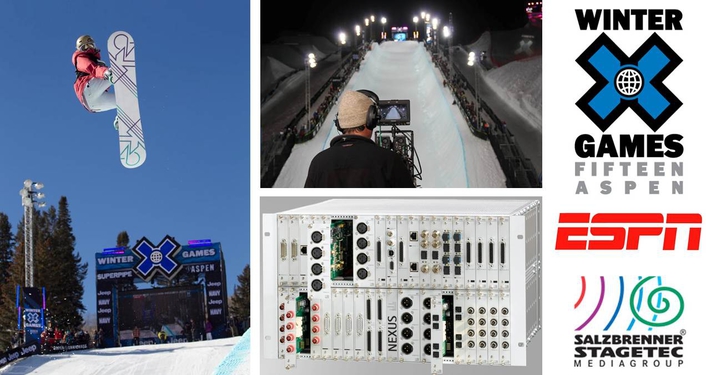 Stagetec’s Nexus routers are part of the signal- and data-transport backbone infrastructure
The Winter X Games in Aspen, CO, Jan. 27-30 will be a more efficient contest, at least as far as the audio is concerned. ESPN will network the Games’ campus with Stagetec’s Nexus Star router cores and base devices, allowing data and audio transport on combinations of copper and fiber running analog, MADI, and AES digital signals.

The router network will offer upwards of 65,000 I/Os, but its biggest advantage will be that, unlike CobraNet’s serial type of network, in which every point on the network must remain on to keep the system running, the routers permit a parallel configuration, allowing network nodes, such as remote trucks, to close up shop once they’re no longer needed for specific events. That can lower personnel requirements and costs.

“We can have home runs from any trailer to any other trailer or Star on the network without having to run the same signal through every trailer, making each run independent,” explains B. Morgan Martin, technical director at GMA, which is providing and setting up the Stagetec gear, as well as running training on it for the Games.

A smaller-scaled version of this router setup and Stagetec digital consoles was deployed at the Summer X Games and used on submixes. This will be the first time ESPN has used the approach for the entire event campus. A CobraNet system will be operated as a backup and used as a comparison to measure the router system’s efficiency.

Each truck and other points on the network use a new MADI-64 card from RTS, connected via fiber-optic cable. Cabling decisions will be based on distance, with longer runs using fiber cable and shorter ones 75-ohm copper. The Star devices will essentially allow any node on the network to control the router signals locally or campus-wide. A total of 13 MADI lines will be set up between trailers.

Stagetec’s Nexus routers are part of the signal- and data-transport backbone infrastructure used at ESPN’s Bristol, CT, and LA Live digital broadcast centers. That, says Henry Rousseau, ESPN’s coordinating technical manager, is why they’re being given what he calls “the ultimate road test” on the Winter X Games.

“They have a proven track record for us in-house, and we wanted to see how well this kind of connectivity and routing did in a remote setup,” he says. “We started out using fiber to connect just the Calrec consoles in the mobile units. That worked out well because we were able to eliminate all the DT-12 connections. Now we’re expanding the concept to the entire campus. The challenge this time,” he adds, “is that the campus is bigger and we also have 3D. So the MADI routing is going to help us share all of our resources for camera PLs and IFBs.”

Rousseau says there are some operational differences between digital routers in the plant and in the field. “It’s important that we get the A1s all trained on it and make sure everything is routed correctly,” he explains. “We’ll be taking lots of notes. But, if it works out like we hope it will, it could be a game-changer.”