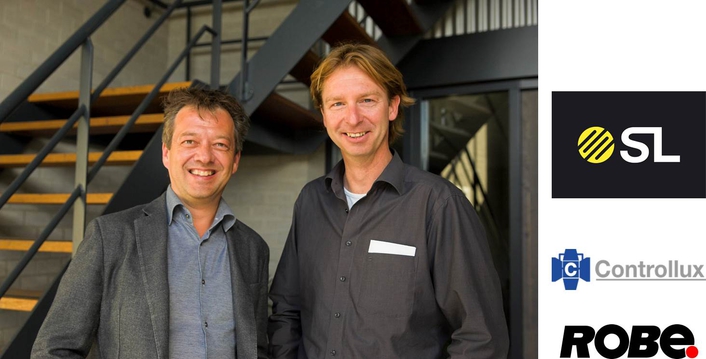 Stagelight’s Jacco van der Heijden on the left and Controllux’s Jeroen van Aalst on the right
Stagelight is a leading Dutch technical production and rental company headed by the charismatic Jacco van der Heijden, and one of a growing number of Dutch companies investing in Robe’s BMFL moving lights.

You would think … walking into Stagelight’s substantial HQ in Den Bosch … that you were entering the portals of some funky nightclub or restaurant destination, surrounded by gleaming metal reclaimed brick and restored wood surfaces, full of interesting proto-industrial shapes and objects, and optimised to allow natural light to flood into its rooms and workshops.

Jacco – who founded the company in 1987 – believes that a ‘visual experience’ should permeate all areas of working and living environments and so considerable thought went into designing a cool inspirational space where his team spend their office or warehouse time.

Stagelight first started buying Robe products in 2011 with a purchase of LEDWash 300s and it now has over 150 Robe units available for its busy schedule which services a multiplicity of live events including many bands and music shows.

These were supplied by Controllux, Robe’s Benelux distributor, a company with which Jacco has been doing business since he started 28 years ago!

In addition to the 24 new BMFLs and the original LEDWash 300s, Stagelight has LEDBeam 100s and also Pointes– added last year - in the inventory.

The company works in all areas of professional entertainment and has been providing lighting and audio solutions increasingly to larger events over the last five years, so Jacco wanted to invest in a moving light brand that was diverse, flexible and reliable, enabling Stagelight to offer its clients the very best technical and creative solutions.

Having become an Adamson Audio partner a few years ago, he was also keen to align himself with a premium moving light brand.

When they started as an Adamson agency, it created a huge buzz in the Netherlands, and Jacco – never one for convention – wanted to do the same again by buying the Robe BMFLs.

He wanted to be able to offer something that only the ‘serious’ companies could offer  ... but with all the flair and ‘boutique’ style that personifies Stagelight, all the friendliness, accessibility and personal attention to detail.

“The BMFL coming to the market presented us with an absolutely ideal opportunity at a perfect time for a new round of investment,” comments Jacco.

Ten of Stagelight’s Project Management and Lighting Design team attended the BMFL Roadshow event organised by Controllux soon after the fixture was launched …  and every one of them came back saying that Stagelight needed to have BMFLs in its rental stock!

Added to that, a number of well-respected Dutch lighting designers who work regularly with Stagelight, like Ronnie Santegoeds and Gerard Maijenburg, also expressed their confidence in the potential of this new Robe product.

“I looked at the calibre of the people telling me this, and they were so convincing that I simply went ahead and placed the order!” he explains. As a smart businessman, he would not have made the decision unless he also had the gut feeling that it was right.

In addition to the feedback from his own personnel … he was already hearing good and positive chatter generally from the market about the BMFL Spot.

The EDM market in particular is HUGE in The Netherlands, and BMFLs and Pointes are constantly on the specifications for these events, which was another reason reinforcing the decision.

Talking about the Robe brand generally, he likes the fact that it is a young and vibrant company with a fresh new approach to the moving light market. “The company has progressed quickly, listened, learnt and reacted very quickly to market needs and demands. In addition to that Robe has a touch of rebel spirit … which I really like,” he declares with one of his characteristic cheeky smiles!

He reckons Robe is in a similar place to where he feels Stagelight is positioned right now … a rising star with a bright future and starting to get involved in some very high profile and special projects.

Jacco’s passion for the industry is still very much as evident today as when he started out in this crazy industry whilst at high school, where he learned to play guitar and joined a rock band.

The band started taking off, he went to university to study electronics, and about half way through his degree course, started getting fascinated by the backstage and technical elements of gigging … as well as the creative ones!

“I figured that combining the two was the way forward”.

His band Thunderin’ Hearts then got the chance to buy their own lighting rig from another pop band Toontje Lager, who were famous in Holland in the early-mid 1980s. In 1986, any band with their own lights – even if they were self-made PAR cans - advanced automatically to a new league of performance! Having the lighting rig also created an additional income stream with other bands queuing up to hire it. Needing an operator, Jacco became part of the package!

When the lights started receiving more bookings than the band … he jumped on the trend and a year later, purchased the rig off the band and founded the fledgling Stagelight.

He worked closely for the next 17 years with Jan van Liempd who had a small sound rig and was the FOH engineer for Thunderin’ Hearts. Together they provided fine-tuned lighting and audio solutions to countless bands and performing artists until 2003, when Jacco bought the sound company. Jan joined Stagelight as a Senior Project Manager – a position he still enjoys today.

Stagelight now has 34 full time staff all of whom are highly motivated and share Jacco’s infectious enthusiasm for the industry and for life. There is a very low turnover of personnel, and ‘the people’ are a big part of what makes the company unique, successful and stand out from other rental companies. Their constantly hectic work schedule also involves the regular employment of up to 100 top freelance technicians and engineers at peak times.

Well known and respected throughout the Benelux region, Stagelight is currently growing in its international scope. As a technical partner and supplier for artists like New York singer-/songwriter Matt Simons they are starting to work regularly in other areas of Europe. The new BMFLs and the other Robe lights are all part of the medium term master-plan.

It’s a name that we can expect to hear a lot in the coming years!