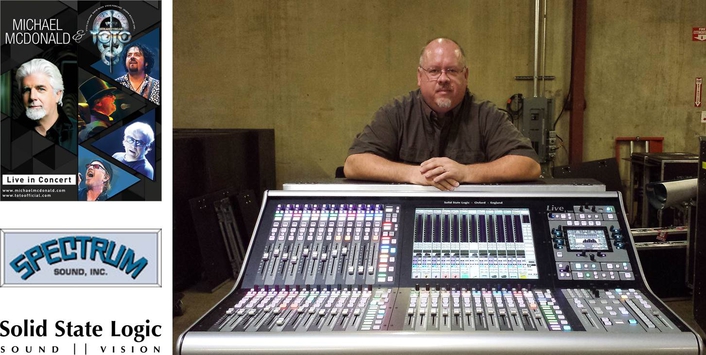 “Because of the separation you get with the summing in the mix bus, it’s easier to place things in the mix”
Blue-eyed soul singer Michael McDonald joins 1980s super-group Toto this summer for a North American co-bill that stops at The Greek in Los Angeles and The Fox in Atlanta. McDonald’s front-of-house engineer Curtis Flatt was first introduced to Spectrum Sound of Nashville while in college and went to work for the company in 1986. Through the long association, Flatt’s career has spanned the best consoles and musicians of the last three decades, including Wynona Judd and the Judds, Donny Osmond and Michael W. Smith. He also filled in for a short time for Robert Collins on Eric Clapton. Today, he can be found at McDonald’s helm with an SSL Live console.

Flatt first took SSL Live out on McDonald’s Christmas Tour last winter. “Spectrum was going to order a pair for Jason Aldean and asked if I wanted to be the first to take one out,” he says.  “I programmed it in my office and, without a production rehearsal, dove in at the first sound check. Michael’s musicians’ sounds are really good to start with. They play really well together and it’s a straightforward show. If you start with a good sounding product, mic it with quality microphones and run it through a console that has an excellent quality, you’re pretty much there. SSL Live brings me to that point and gives me the freedom to just mix and not have to think about a lot of external processes.”

The transparency of SSL Live’s mix bus, especially since it is a digital console, was one of the first things Flatt noticed. “There are a handful of consoles out there that sound good or really good, but as everybody who mixes knows, as you start to sum all those good sounding parts together, a lot of times you’re either working with or around the console to create that final sound, that final mix,” he explains. “On a warm console, you may have to figure out which inputs could lose a little warmth to fit in with everything so that it doesn’t get muddy. Live has such a separation that as you add all of the inputs, you don’t have this muddle going on, which happens so often on other live consoles. There’s definition to everything in the mix.”

Flatt credits the fidelity both in the highs and the lows of the console. “There’s a nice top-end on it and it’s really smooth; there isn’t an overabundance of hype on it,” he says, adding, “The low-end on the console is nice and round without being overbearing.”

He also notes an improvement in mixing and panning compared to other consoles. “Because of the separation you get with the summing in the mix bus, it’s easier to place things in the mix,” he says. “The palette is more open, so placement in the mix becomes really noticeable. Slight pans and movements here and there present a better picture. You hear subtle differences. For example, our drummer had two hi-hats; one was panned slightly left and one was barely right – and I mean barely, but you always knew which one he was playing, even with your eyes closed.

“I run a couple of parallel-compression bus groups because we try to maintain a certain level in the show and want to add a little bit of punch back into that in some areas without overly compressing the entire mix,” he continues. “So, I have a parallel drum group and a parallel background vocal group to level them out a little bit and add them in as needed. If the show really starts to push a little bit, there may be a dB or two of compression with the bus compressor, but the show is very dynamic so I don’t want to take the dynamics out, since the music lends itself to dynamics. It’s got pop, rock and R&B.”

The difference the SSL Live console makes during a performance is starting to gain recognition from the entire McDonald camp. “It’s not only been noticed by Michael and the band, but also management, other members of the crew and even some diehard fans noticed that something was different,” Flatt says. “When we did our first fly date after coming back from being on tour, I was using a different console because we flew in for a one-off show. Michael walked past FOH to say ‘hi,’ and when he looked over at the console and saw it wasn’t the SSL Live, he said, ‘Oh, it’s one of those.’ So it’s definitely something that he and the band have noticed; that management and production management have said ‘Yeah, we’re going to carry the SSL console, you don’t have to fight for it.’ ”