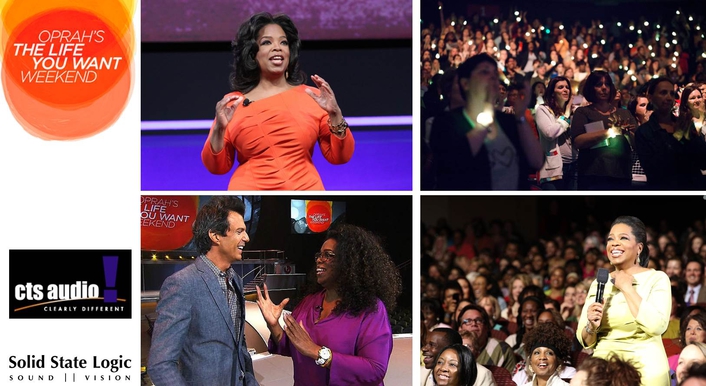 .
Oprah Winfrey has taken ‘The Life You Want Weekend’, a high-profile two-night self-help show on the road for eight weekends this fall. Along for the ride is CTS Audio, who is providing sound for the tour including a SSL Live. L500 console at the mix position, operated by CTS veteran front of house engineer Jon Schwarz.

This two-night event starts the first night with Winfrey offering the inspirational story of her life’s journey. She speaks about identifying life’s purpose and leads exercises on taking action to reach goals. The second night, Oprah introduces motivational speakers from her network, who each give their own monologues in turn. “Eat, Pray, Love” author Elizabeth Gilbert, pastor Rob Bell and OWN TV personality Iyanla Vanzant are joined in some cities by alternative-medicine guru Deepak Chopra as well as DJ performances.

‘The Life You Want’ employs two stages; a traditional endplay arena stage with a multi-tiered set, multiple video and a stereo line-array music and playback system and a small B stage in the arena’s center, where monologues are delivered via a second, separate ‘in the round’ system. With the majority of the audio originating from the speakers and DJ performances, input count is small, under 30 channels, but when combined with the other performances elements, the show became a real undertaking. “They [the Oprah Tour] have a lot of video content,” explains CTS Vice President Mike Taylor. “It’s a very complicated show in terms of video cueing and audio because of all of the sources.”

The real challenge for this tour was generating a high-quality audio feed to ensure that all inspirational messages were heard both in the venue and for future TV Broadcasts and DVD’s. “Most, if not all of the show, is being recorded for TV, so we wanted to pass along the highest quality audio,” adds Schwarz. “They’re just taking analogue audio output back to the video world but they’ve noted how clean and warm it sounds and the dynamic range is fantastic.” 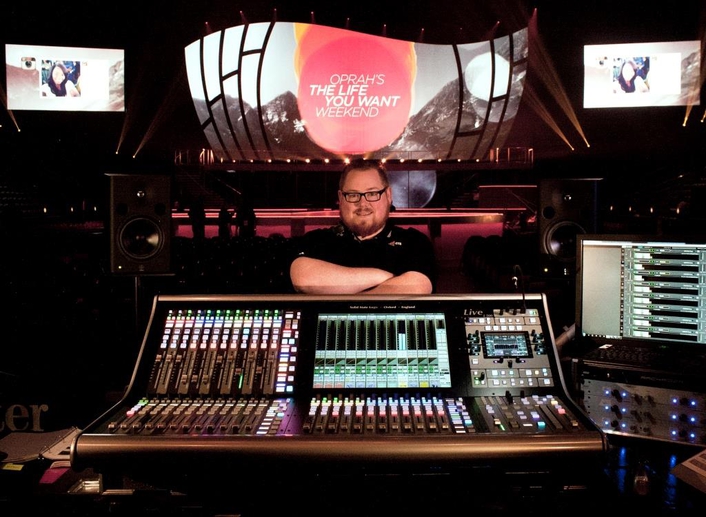 “The clarity and the ‘air’ on the top end are remarkable.”

Though this was Schwarz’s first major tour where he was working with the L500, he had a chance to experience the dramatic difference in sound quality at a few previous CTS events and knew it would be an asset to this minimalist production. “The very first time I heard SSL Live, we had a show in a stadium and there was a moment with a person singing and playing the acoustic guitar,” Schwarz says. “I’ve done plenty of shows in stadiums with many different consoles and the very first thing I noticed with this one, was the clarity and the top end ‘air’ on it. I’ve never heard that, especially in a space that large with that much reverb time in the room. The clarity and the ‘air’ on the top end are remarkable.”

Schwarz points out that the L500’s input list can be organized by operator workflow and how banks of faders are programmed, which ended up being an asset for each show’s varying programs. The console has two lower 12-fader banks, or ‘tiles’ in the left and center positions, plus a third, 12-fader tile on the upper left of the console. “On most consoles, the sequence of inputs dictates workflow,” he explains. “With SSL Live, input list order just doesn’t matter as much. The concept of layers and banks is very cool; the first night’s show varies from the second night’s show, so I layer my banks based on what I need on the surface for each day. I also lay out what I need for different parts of each show in other layers on the center tile.”

Due to the setup of the event, redundancy becomes a key factor. “Because the format is predominantly one input, one person, I can’t have enough redundancy and back-ups,” he explains. “To accomplish this, several hardwired emergency microphones are placed at different stage locations, as well as a few others that are all controlled from a layer on the top left tile. I also have my master faders for the music PA and the vocal PA on the top left with the emergency mics due to the dual system design.”

Console operators of corporate-style events, such as Oprah’s, must man their consoles for much longer periods of time than with typical concerts.  The design and layout of the SSL Live helps Schwarz to handle his job without fatigue. “On Saturday I sit behind the console for close to 10 hours straight,” he says. “With the SSL Live, operators can sit in one place without having to move around a lot. Having everything within arm’s reach is a huge convenience.”

He also mentions the Focus Channel section on the L500's right side as being an asset during the tour. “At first I used the main, central touch screen a lot, but over time I find I touch the Focus Fader and Channel Control Tile more and the main screen less,” he says. “Grabbing hotkeys and using its small screen is fast and accurate and there’s a lot of information there. When I have to ride gain or EQ, based on what’s happening on the show with something really dynamic, I use it a lot.”

Schwarz also points out that the sound of the console allows him to mix differently than on another console. “Between the preamps and EQs, it reacts differently than other consoles I’ve used, so I can lean on them more than I would with others,” he says. “I’ve also found that the EQ is so musical, I’m able to do things that I’ve never been able to do with other consoles and the results are exciting. I had someone speaking, and the way that I could shelf one side and boost the other allowed me to cut the sibilance out and add air on the back side, which was something I hadn’t experienced on other consoles.”

“It’s just so transparent, it really is,” says Taylor about the sound quality of Live. “Whether hearing an acoustic guitar and vocal or a full band for an event in a stadium with 30,000 people was stunning. We’ve also done a worship conference with 12,000 attendees and the sound was just incredible for just a vocal and a piano.  Then to take it on a TV shoot of an awards show with full bands and hear what it could do was a testament of the flexibility and consistency of this console.  The console is just so clear.”