Johnny Kierle with SSL Live at WOMAD 2014: “The flexibility of surface offered by the SSL is unparalleled”
Celebrating its 34th year, World of Music, Arts and Dance (WOMAD) is an annual eclectic world-music festival of “artists whom we might not get to hear anywhere else” and the largest and most prestigious event of its kind. As with WOMADs of the past, Britannia Row Productions Ltd. once again provided sound services for the festival. But this year had a new team member – SSL Live consoles at FOH for two stages: the main Open Air Stage and at WOMAD’s new Society of Sound marquee.

Having worked as front of house and system engineer in WOMAD’s Siam Tent last year, New Zealander Johnny Keirle returned to mix FOH at the Open Air Stage. An SSL Live console was used by Keirle to mix acts travelling without a FOH engineer. “The SSL Live provides an intuitive, logical workflow and is very easy to use in a festival situation,” he says. “Despite the time restrictions and last minute changes that can prove difficult and stressful at a festival, the console proved to be perfect for our setup.”

For Keirle, the most appealing feature of Live was the customisability of the surface. “On analogue consoles, you always have everything in front of you at all times,” he says. “Obviously, with digital consoles, this is not the case. So, it’s essential to have channels where they’re needed. The flexibility of the control surface offered by the SSL is unparalleled.”

Keirle also mentions the secondary screen on the Channel Control Tile and its Focus Fader below, which together form the right-hand ‘Focus Channel.’ “The combination of direct-access buttons, push-button rotary encoders and touch screen offer full control across all channel processing,” he continues. “I could work on channel processing while simultaneously using the primary screen for other functions.”

Many engineers begin by mainly using Live’s large, central multi-touch screen but like Keirle quickly started to see the benefits of its Channel Control Tile. “As I familiarised myself with the console’s layout and workflow, I found I preferred to use the secondary, smaller screen with its direct access buttons and associated rotary encoders,” he adds. “The Focus Channel offers quicker access to various channel functions and has the added benefit of physical knobs, which I find preferable to the touch screen or a fader flip for fine-tuning and tweaking.”

With a new digital console it can be a challenge to understand its workflow and find the best method of operation but not so for Keirle with Live. “For me, the simple comfort of being able to have my faders laid out exactly as I wanted, in conjunction with full control over channel processing on the second screen, made it easy to quickly get underway,” Keirle says. “This meant I could spend more time working on my mixes, rather than learning how to operate the console. The ability to easily change the console’s configuration is fantastic. Changing inputs or outputs from mono to stereo, or changing auxiliaries from pre- to post-fader is fast and easy, making the creation of suitable mix templates effortless.”

It wasn’t long before Keirle was comfortable pushing the limits of the console. “I began to get more experimental with my show file structuring and layout,” he remarks. “I would change the configuration; make use of multiple stems as subgroups for parallel compression; use various effects units inserted on channels, stems and auxiliaries; run inputs into multiple channels for dedicated effected channels and so on.”

Keirle also found the customisable fader banks and layers very useful for WOMAD’s festival situation. “I found that I could easily reorder channels to work in our festival-patch scenario,” he adds. “So, I adopted a layout that worked well for the bands I was mixing.”

The loudspeaker system at the Open Air Stage consisted of one dozen L-Acoustics K1s per side, supplemented with 16 SB28 subs and a dozen KARA front-fills. “Using the SSL with the K1 system made for an extremely effortless mix. I never struggled to get anything sounding how I wanted,” Keirle says. “I found SSL Live’s internal effects very easy to dial in and never had any issues with quality of effects sound, which I’ve commonly found to be a weak point in other touring consoles.”

Solid State Logic, the world’s leading provider of tools for creative audio professionals, is proud to announce its Live Console Operator Training Days. Aimed at serving as an introduction to the SSL Live console, these free one-day courses will include hands-on experience for all participants. The training sessions will take place at the company’s Oxford, England-based headquarters on 17th and 18th September, 1st and 2nd October and 5th and 6th November. While these events are completely free, numbers are strictly limited. All interested parties are encouraged to apply via the online application form, found online at store.solidstatelogic.com/forms/live-training

Currently featuring its V2 Software, SSL Live is the company’s first console for live sound production, suited to touring or installation, FOH or monitor systems for venues, arenas, houses of worship and concert halls. Reception to the console by the industry has been extremely positive since its announcement last year, with Live already appearing on tour with The Killers, Jason Aldean and Flogging Molly as well as at various music festivals, such as WOMAD and Live at Edinburgh Castle. 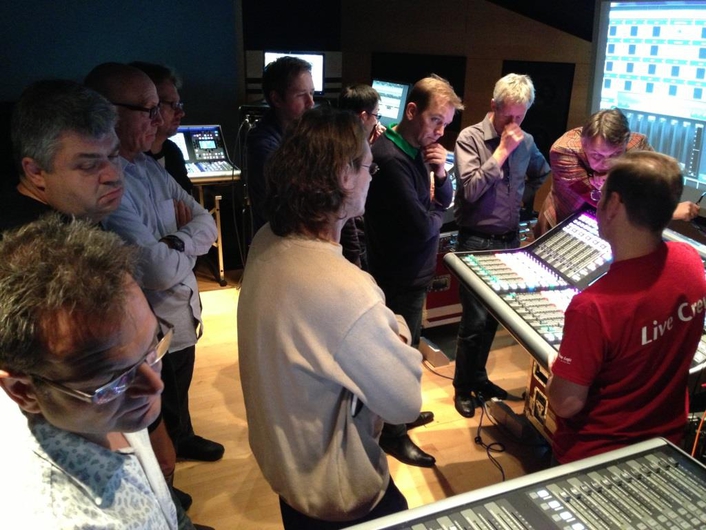