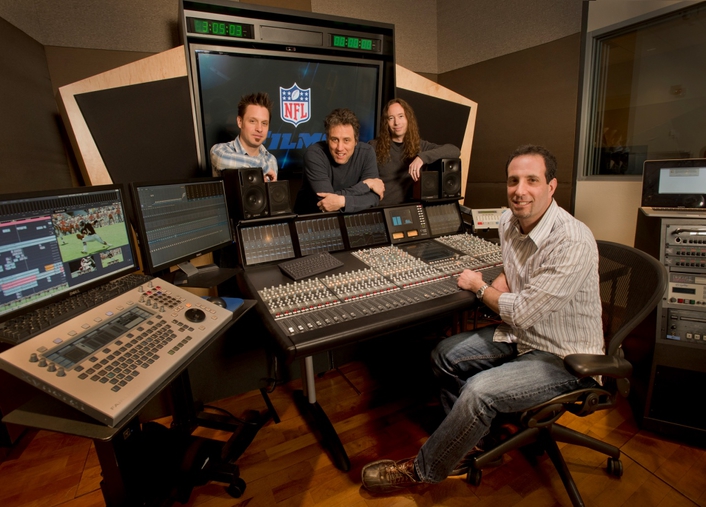 Left to right behind the console are Fran Camardella, Ernie Fortunato and Dave Casuscelli. Seated at the console is Ron Schreier
A Solid State Logic C100 HDS Digital Broadcast Console is running the audio plays for NFL Films, the organization that, since its formation in 1967, has set production style standards for contemporary sports presentations, receiving 112 Emmy Awards over the years for cinematography, writing, editing, sound, sports series and specials. Continuing its winning production style, NFL Films recently upgraded its shooting stage for HD production of its programs Inside the NFL, on Showtime; NFL Matchup, on ESPN; and Playbook and First on the Field, on  NFL Network. The C100 was chosen to make the change from analogue to digital audio workflow.

“Our large format consoles have always been analogue SSL, so we were very happy to continue our long and positive relationship into the digital realm,” says Rich Markowitz, director of audio engineering for NFL Films. “We did an extensive evaluation of the major players in the digital console market and, while it’s easy to write features on a cut sheet, it’s something else altogether to make them usable on a console surface. SSL takes all of those features and makes them very functional, and that’s really important. For example, channel information concerning EQ, dynamics and routing are always up front, so the engineer can see what is going on without paging through layers of information. SSL consoles are designed from the end user point of view making our transition from analogue to digital easy.”

NFL Films relies on the intuitive ergonomic layout of console features to help the engineering staff migrate into an all-digital workflow. The fully featured mix minus system on the C100 allows NFL Films to handle multiple remote interviews with ease. As each channel has its own settable delay, different video format source material is always in sync. With weekly changes in promos and sponsors for each show, the studio engineers rely on the C-Play audio playout option to drag and drop an audio file directly into the console. This allows them to have a file ready for playback at a moment’s notice, saving a considerable amount of time.

“The intuitive design of the C100 made it easy for us to jump from our analog SSL legacy console to the new digital format because both consoles share several functional similarities,” says Ron Schreier, senior mix engineer for NFL Films. “As a mixer, one of the things I’ve noticed with digital consoles is how they feel under your fingers. Mixing is a creative art and the tactile feedback of a console helps that process, especially in a live television environment. The console’s EQs and dynamics have a great sound and its algorithms give the mixes a noticeable depth and clarity on air.   The amount of flexibility, bussing and output options that are available address our most complicated shows from a technical standpoint. It’s really a powerful production tool and it’s obvious that a lot of thought went into building this console.”