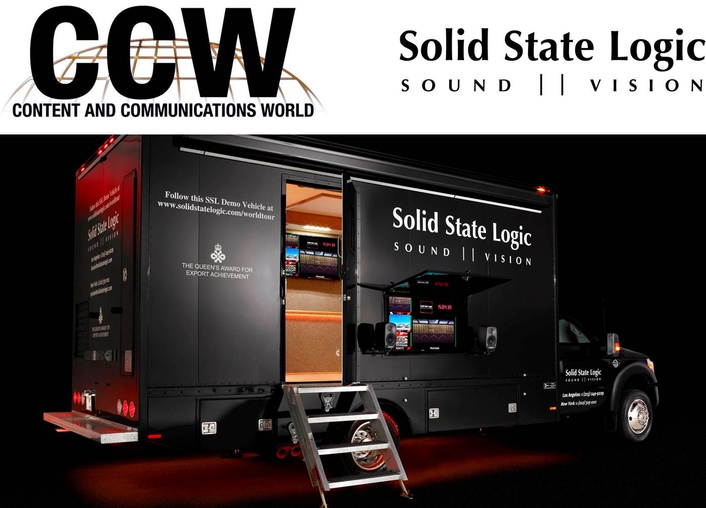 New LMS-16 Multi-Channel Loudness Metering System and MADI-Dante Bridge Demonstrated on Truck
Solid State Logic, one of the world’s leading manufacturer of advanced tools for audio professionals, is pleased to announce that its Broadcast Equipment Demonstration Vehicle will be a featured attraction at Content & Communications World 2013 (CCW Booth 900).

The custom designed mobile production vehicle features SSL’s C10 HD Compact Broadcast Console and associated routing and I/O solutions in conjunction with the key audio and video monitoring and communications systems required for a modern broadcast production facility. In addition, two new product releases will be showcased in the vehicle: The ‘LMS-16’ Multi-Channel Loudness and True Peak Metering System and the MADI-Dante Bridge.

“We are very excited to have our Broadcast Equipment Demonstration Vehicle at CCW this year,” says Steve Zaretsky, Vice President of Broadcast Sales, SSL Inc. “The vehicle was designed from the ground up to showcase the C10 HD Compact Broadcast Console in a real life environment, allowing interested parties from around North America to have access at their place of business, be it a major production facility, an educational facility or anything in between. We believe CCW attendees will embrace the demonstration vehicle as a ‘must see’ exhibit at the show. We are also confident that the new loudness metering and Dante audio networking products will be of considerable interest at the show”.

About the Truck:
The SSL Broadcast Equipment Demonstration Vehicle was designed by SSL’s Project Engineering team and crafted by leading mobile vehicle specialist Shook Mobile Technology. Russ Berger Design Group (RBDG) provided the acoustic design for the space. The vehicle is presented in association with SSL’s technology partners: Genelec, Miranda and RTS. The truck demonstrates the capabilities of all of these systems and the integration that is possible between them. The SSL Broadcast Equipment Demonstration Vehicle visits local U.S. broadcasters, houses of worship, systems integrators and key sports and entertainment events, as well as being showcased at trade exhibitions like CCW.

About ‘LMS-16’:
The new ‘LMS-16’ Multi-Channel Loudness and True Peak Metering System, which can be used with SSL’s Digital Broadcast Consoles or as a stand-alone product, will be showcased on the truck. Created through a strategic partnership with NUGEN Audio, the LMS-16 offers NUGEN’s new ‘MultiMonitor’ software as part of a turnkey system that is applicable in any situation where loudness compliance for broadcast playout and production is required. The software is pre-installed and configured on a dedicated industrial strength 1RU PC, fitted with SSL’s ‘MadiXtreme 128’ 2x64 channel optical MADI audio interface, a GPIO interface card and with metering information displayed on virtually any connected video monitor. An optional monitor arm is available to facilitate convenient side mounting of a screen on C100 HDS or C10 HD consoles.

LMS-16 offers the most powerful multi-channel Loudness and True Peak metering available today. It offers 16 individual meters, each capable of mono, stereo or 5.1 formats (providing metering of up to 96 audio channels simultaneously), with each meter showing a LUFS momentary display alongside a True Peak display. Each meter also has a dedicated numeric Short Term and Integrated LUFS data display, with the option to color-code meters to aid grouping. Each meter also features a minimum and maximum short term alerts function. LMS-16 is fully compliant with CALM Act legislation, ITU-R BS1770/1, ATSC A/85, EBU R128 and other specific worldwide localizations. Each meter can be set to utilize a different standard to facilitate international streaming.

About the MADI-Dante Bridge:
The SSL MADI-Dante Bridge is the world’s first broadcast specification MADI-Dante interface, allowing expandable audio routing between SSL consoles or any MADI device and Dante IP Audio networks. With 64 channels per Bridge (@ 48kHz) and up to 512 channels per 1GB network link, Dante is fully scalable and capable of providing routing channel counts from tens to thousands and beyond using standard IT infrastructure. Redundant PSU, MADI ports and Dante ports mean the Bridge is built for uninterrupted operation, keeping critical devices and audio paths functioning throughout the broadcast facility. In addition to the inbuilt clock redundancy options in Dante controller, the MADI-Dante Bridge also includes a pair of redundant sync inputs for use as a self-redundant Dante Grand master clock. Intended for use with Dante controller and third-party Dante products, the MADI-Dante Bridge shows commitment to interoperability while understanding broadcasters’ critical needs.

The Bridge features a front panel headphone socket (with rotary level control) and inbuilt headphone monitor routing, to truly replace traditional patch bay confidence routing and fault finding functionality with equivalents in the IP audio domain. Simple front panel controls facilitate routing mono or stereo paths from MADI In, MADI Out, Dante In or Dante Out directly to the headphones. A front panel LCD screen provides signal present metering selectable to show four points in the signal chain: MADI In, MADI Out, Dante In and Dante Out. GPIO connections allow for transfer of tally info and switching functions across the network with the audio.