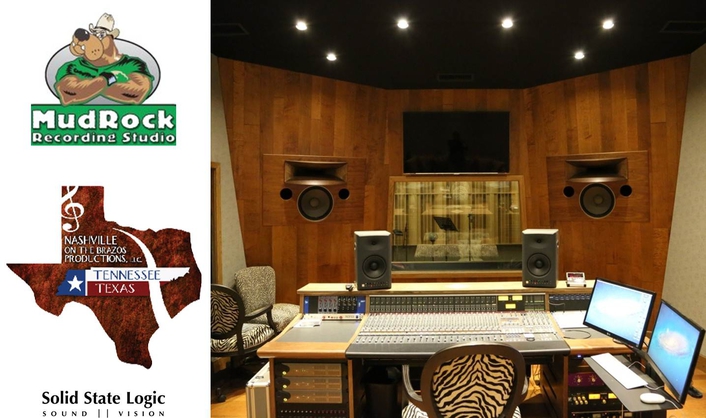 “SSL has perfected the blending of computer technology with the industry standard analogue way of recording.”
MudRock Recording Studios, a premiere, commercial recording facility built to service clients of the Nashville on the Brazos record label, stepped up to a Solid State Logic AWS 948 Hybrid Console/Controller to complete its high-end studio vision. Founded by entrepreneur and vocalist Ken Goldsmith, whose creative vision drives the studio, the facility additionally caters to local and national bands featuring multiple rooms that cover everything from simple rehearsals to full blown music video production.

“MudRock Recording Studios was built to rival studios found in Nashville and LA, offering high-end recording services for bands and artists in our region,” says Anthony Nieto, record and mix engineer for MudRock. “When considering a console, we canvassed leading recording studios, polled major producers, extremely well-established mixing engineers and artists, and SSL was consistently on the top of everyone’s list of choices. Given the track counts, the classic layout of the console, 24 channels of SuperAnalogue™ pre amps, SSL EQ and the legendary bus compressor, the AWS 948 was everything we needed to get going from the top level. You really cannot go wrong with SSL.”

MudRock Recording Studios features The Ballroom, which provides a 640 square foot stage and 200-seat capacity for showcasing bands and hosting events. The Ballroom is set for the production of music videos and includes lighting, video recording, broadcasting capabilities and large screen displays. The Live Room is large enough for up to eight musicians/singers, with the Ballroom doubling as a giant drum booth for heavier sessions. Both rooms are connected to the AWS.

“The Ballroom in MudRock will provide a set for live band performances as well as multimedia video recording and broadcasting,” continues Nieto.  “Our intention is to employ highly-skilled audio/video engineers and technicians, with the goal of airing a weekly music show that will showcase up-and-coming performers as well as big name stars. Our hope is this will give us a national distribution network to sell the music developed by writers signed to Nashville on the Brazos. The AWS is a big part of this because of the wow-factor in owning an SSL console. The AWS definitely draws musicians to the facility.”

MudRock engineer Ken Morgan adds, “The AWS was a real good choice for this studio because it integrates perfectly with Pro Tools® 10 and beyond, which is a big part of where we are headed. But more importantly, it gives us the opportunity to use it as a standalone analogue board. I have a lot of experience on legacy SSL consoles and I like the way SSL has carried forward its industry standard ergonomic user interface. I really prefer the automation features of the SSL over Pro Tools and I love the EQ’s and the way the console responds. It just sounds right. To its credit, SSL has been nothing short of miraculous in getting us up and running with the AWS. SSL has perfected the blending of computer technology with the industry standard analogue way of recording.”