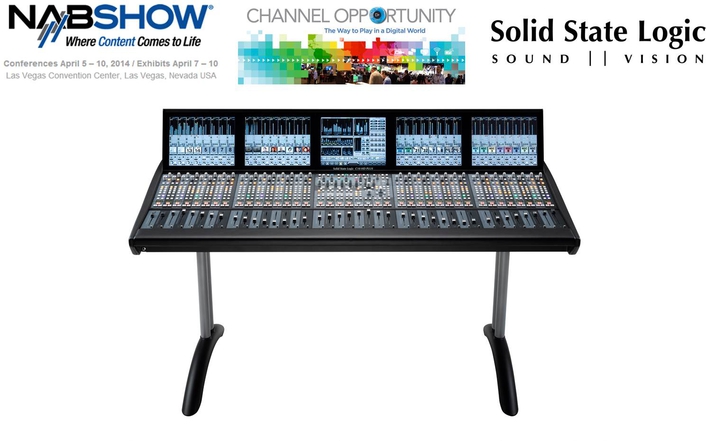 C100 HD PLUS AND C10 HD PLUS - The most powerful broadcast consoles SSL has ever produced
Solid State Logic, a world leading provider of tools for creative audio professionals, is proud to announce the launch of its new C100 HD PLUS and C10 HD PLUS digital broadcast consoles at the 2014 NAB Show (Booth C2317). SSL’s digital broadcast console range has an enviable reputation for sonic excellence, refined user control interfaces, innovative software features and streamlined integration within complex networked and automated broadcast infrastructure. The new ‘Plus’ versions of the acclaimed C100 and C10 consoles bring together new features and added value consolidation of SSL Production Assistant software to offer users the most powerful and flexible systems SSL has ever produced. 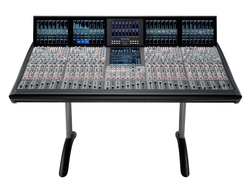 The new C100 HD PLUS Large Format Broadcast Console is designed to offer a complete production solution for News and Sports in a single standard high power configuration. Whether the application is an automation controlled web channel, through to the largest of sports productions, the new standard processing configuration at the heart of the C100 HD PLUS console delivers more processing than ever before in an SSL broadcast console. SSL’s third generation digital broadcast console is the most technically refined system available anywhere in the world. Redundant Blackrock Processor cards in a compact 2U rack process 588 audio mix paths, with 256 channels of 6 Band EQ, and 284 channels of Dynamics with 512 channels of integrated MADI I/O.

The centre section penthouse of the C100 HD PLUS features a new 10-inch screen, which can be used to display any HDMI video source and enables the user to select from a wide range of metering options. The console can be specified with SSL’s own LMS-16 Loudness Monitoring system to provide comprehensive, highly configurable 16 x 5.1-channel Loudness and True Peak monitoring. The control surface has also been re-designed to facilitate clearer channel identification in a wider range of lighting conditions. 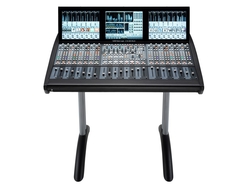 The new C10 HD PLUS is ‘out of the box’ the world’s most powerful Compact Digital Broadcast Console. With frame sizes from 16 to 48 faders, the self-contained fanless console can be built into vans for ENG operations, specified for Network scale sports productions or is ideal for all-round production demands in mid-scale broadcast facilities. The simple, button-driven surface is easy for new operators while a new feature set provides all the features a broadcaster needs for the most sophisticated production. New ‘Plus’ features provide the established and proven C10 platform with a new level of performance, making it a great investment for facilities with plans to grow. Integrated into the C10 HD PLUS, the Blackrock Processor card offers 216 audio paths, with 160 channels of 6 Band EQ, and 188 channels of Dynamics with 512 channels of integrated MADI I/O.  The new C10 HD PLUS also features a redesigned fader panel colour scheme.

The case for IP Audio Networking and Dante for broadcast
Audinate’s Dante technology is well established in professional audio for live production and installation sectors, with more than 200 devices from over 75 different manufacturers already available. The demonstration at NAB sets out a very strong case for why Dante is the right choice for forward-thinking audio routing for broadcast production applications.

Dante uses IP networking. The backbone of IT infrastructures worldwide, IP networking is a lower cost technology that benefits from developments and cost competition in much larger industries than broadcasting. Cat 5, Cat 6, fibre cabling and off-the-shelf network switch hardware come at a fraction of the cost of comparable TDM-based solutions and are guaranteed to be supported by international standards and major manufacturers. IP networks are scalable and can be grown easily as budgets and needs require. In addition to transporting audio, they can also support other data traffic pertinent to the workflow. The function of routing, so expensive and complex to implement in TDM systems, can be accomplished using standard network switch hardware and conventionally managed router software. Ethernet/IP connectivity simplifies the interfacing to a range of other systems such as Intercoms and Station Automation. Network switches with industry-standard redundancy protocols are readily available and enable IP-based networks to meet the highest levels of redundancy demanded by Broadcasters.

SSL chose to utilise Audinate’s Dante Technology because it meets their technical requirements and has the critical mass that other solutions can’t match. Developed using existing standards, including IEEE and IETF, Dante is deployable on any standard IP infrastructure and can share networks with other types of traffic. A key factor in SSL’s decision was Audinate’s commitment to converge with the AVB standards and to conform with AES67. These clear migration paths mean investment today is future-proof and a single device will be able to function in any of these environments. Audinate’s clearly defined device discovery mechanism also means any device is plug-and-play,  and network standards allow you to tailor your infrastructure to define if you want this to be the case.

Key IP Audio Network benefits:
·    High Channel Counts: 512ch @ 48kHz (256 @ 96kHz) on a single 1GB connection.
·    Guaranteed Interoperability: plug-and-play discoverability of 200 devices from 75 different manufacturers – and growing.
·    Remote Device Control: parameters configured anywhere on the network.
·    Reduced Cost: standard low cost IT hardware, standard and/or existing Cat 5 or Cat 6 cabling with audio and control on the same network down a single cable.
·    Simplified Interconnectivity: Ethernet/IP connectivity simplifies interfacing with a wide range of devices, including Intercoms and Station Automation.
·    Flexible Scalability: systems can grow as your needs evolve. Want a bigger network? Add another switch!
·    Full Network Redundancy: technology tried-and-tested across many industries and fully compatible with all network redundancy models.
·    Distributed Routing Control: routing control from unlimited devices or terminals.
·    Absolute Resilience: catastrophic failure of a single device will have no effect on any other devices in the network.
·    Standards compliant: IEEE and IETF compliant, thus deployable on and can mix with traffic on any standard IP infrastructure. Committed to converge with AVB standards and conform with AES67.

Network I/O: MADI-Bridge
‘MADI-Bridge’ provides an interface between a Dante IP Audio Network and MADI. With 64 channels per Bridge (@ 48kHz), redundant MADI, IP Network ports and PSU, the Bridge is built for interrupted fully redundant operation. In addition to the built-in clock redundancy in Dante controller, the MADI-Bridge includes a pair of sync inputs for use as a self-redundant Dante Grand Master clock. MADI-Bridge also features a front panel headphone socket (with rotary level control) and built-in headphone monitor routing, to truly replace traditional patch bay routing and fault-finding functionality with equivalents in the IP Audio domain. GPIO connections allow for transfer of tally info and switching functions across the network with the Audio.