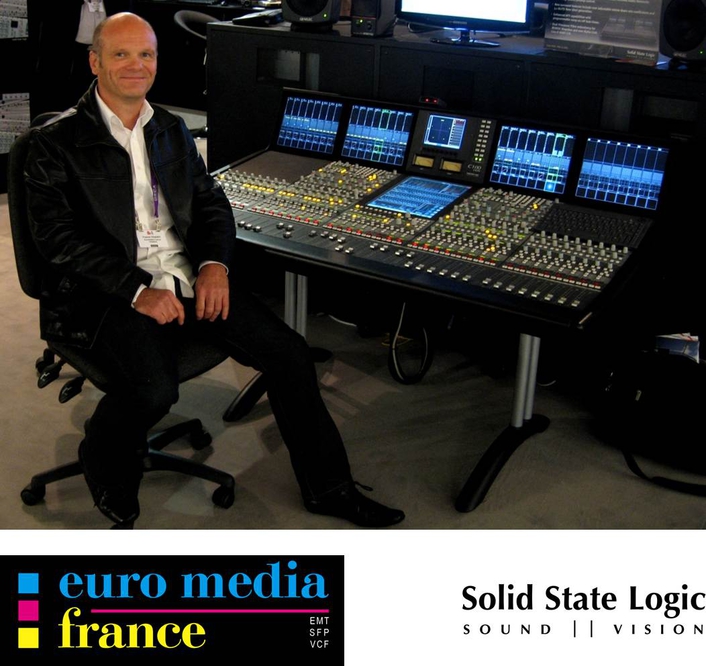 Franck Fradet, operational technical director for Euro Media France, seated at the C100 HDS during IBC 2011
Solid State Logic is pleased to announce the sale of C100 HDS consoles for three GTHP (Groupement Technique des Hipodromes Parisiens) HD OB vans and the new Euro Media France XL1 HD OB van. The consoles will provide each van with the power and flexibility necessary to cover major horse racing events for GTHP as well as sports and live music/television events for Euro Media France, all within the limited space environments of an OB van.

GTHP is an association that provides technical resources and staff for media coverage of horse racing events for direct on-air re-transmission to different TV channels. The three C100 consoles for GTHP will be installed in purpose-built OB vans to cover these types of events throughout France. The consoles offer 56 faders controlling 512 channels of DSP with the Dialogue Automix and 5.1 Upmix options. Each console is interfaced with an SSL MORSE Router that manages the I/O sound infrastructure of each OB Van, as well as interfacing with the video equipment with LSB/VSM control. The first system will be delivered during IBC with two others coming in the next few months.

Euro Media France, a part of the largest European audiovisual and technical services provider, Euro Media Group, is refurbishing its OB van, Road Runner 1, to be the largest capacity truck offered by Euro Media France for HDTV programs including sports events such as Football and Rugby’s Premier League for Canal+, and for the TV live music/talk-show programs X-Factor, Sing Off and Ti Lascio. The van’s new designation is XL1. Euro Media France chose an SSL C100 HDS with 64 faders controlling 512 channels of DSP for the job with MORSE Router to handle the high microphone count needed for events and Dialogue Automix and 5.1 Upmix options.

“We needed to equip our largest HD OB Van with a high-end, powerful console coupled with a large router, to efficiently manage our audio resources within our space requirements,” says Franck Fradet, technical director for Euro Media France. “The C100 HDS with MORSE Router and MADI interface was clearly best choice. The programs we capture are incredibly complex and demanding, so we regularly need to run audio with two operators at the console. The capability of the C100 HDS on this front was an important factor for us and we are pleased that the console has responded positively to our expectations.”