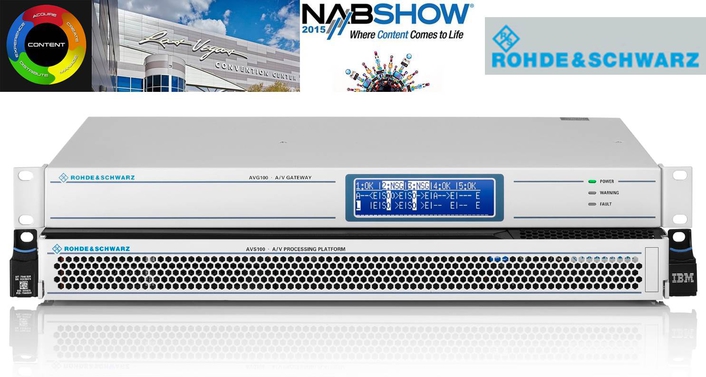 Rohde & Schwarz will showcase its products and solutions at booth SL1105 in South Lower Hall
Rohde & Schwarz has long been supporting the 4K digital video format with its range of products. At NAB 2015 in Las Vegas, the company will showcase yet another application for this format with its R&S VENICE ingest and production server. In live demonstrations, Rohde & Schwarz will also show how its current generation of transmitters can significantly lower operating costs. Plus, the latest T&M products for developing and manufacturing devices and components for the DOCSIS 3.1 broadband standard will be presented. The solutions from the broadcast and media specialist will be on display at booth SL1105 in South Lower Hall.

Easy processing of large data volumes
Rohde & Schwarz will use the R&S CLIPSTER mastering station to present a complete interoperable master format (IMF) workflow including closed captions. The IMF will show users an extremely convenient way out of the existing labyrinth of multilingual versions. The innovative, scalable R&S SpycerBox Cell storage solution has also been enhanced. It now offers 60 Tbyte storage capacity in a single height unit – an extraordinary combination of performance and functionality.

Testing DOCSIS 3.1 broadband devices at their limits
To transmit 4K UHD content into consumer households, new technologies such as the DOCSIS 3.1 standard are required. Rohde & Schwarz will present its R&S CLGD cable load generator for developing network components complying with this standard. In combination with the R&S FSW signal and spectrum analyzer, the R&S CLGD can be used to test signals in the upstream and downstream.

Rohde & Schwarz
The Rohde & Schwarz electronics group offers innovative solutions in the following business fields: test and measurement, broadcast and media, secure communications, cybersecurity, radiomonitoring and radiolocation. Founded more than 80 years ago, this independent company has an extensive sales and service network and is present in more than 70 countries. The electronics group is among the world market leaders in its established business fields. On June 30, 2014, Rohde & Schwarz had approximately 9800 employees. It achieved a net revenue of EUR 1.75 billion in the 2013/2014 fiscal year (July to June). The company is headquartered in Munich, Germany. It also has regional headquarters in Singapore and Columbia, Maryland, USA, to manage its operations in these regions.