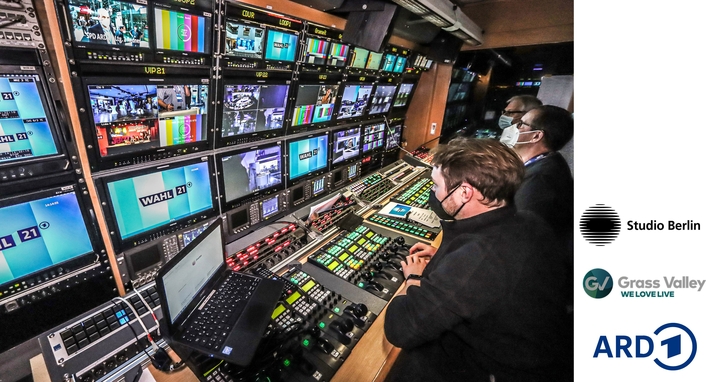 The Ü8 HD from Studio Berlin and the associated rescue vehicle were in a cordoned-off area at Reichstagsufer.

Berlin was the political focus of national and international TV reporting. There was a lot of activity in the ARD capital studio to report live until late at night about the federal election in 2021 and two state elections. The ARD production management had called in almost all personnel and material to realize this live program. We had a look at what was happening from behind the scenes.

Saturday afternoon, a good 24 hours before the last votes are cast in the federal election in 2021: A quartet of security staff in black suits and with earphones is standing in front of the entrance to the ARD capital studio on Wilhelmstrasse in Berlin, which is within sight of the Reichstag building near Marschallbrücke. Despite the intimidating first impression, the greeting is friendly and the sliding glass doors eventually open. In the lobby on the right there is a reporter set from Bayerischer Rundfunk with a camera, monitor, microphones, LED lighting and a high table. On the left-hand side, Mitteldeutsche Rundfunk has set up a similar structure. Before the next closed sliding glass door, the identity and 3G status are checked. Wearing an accreditation tape around the wrist and an FFP2 mask, we were joined Werner Melzer, by production manager of the ARD capital studio, and went to see the rooms relevant for TV production, which stretched over five floors, and the set of the election studio on the first floor of the atrium. Outside, two power generators whirred, delivering an output of 500 kVA for the voting studio and the OB van, operating completely independently of the general power supply. About 100 meters of power cable were laid in the building and to the OB van. The guarded courtyard gate led to the blocked Reichstagufer, where the Ü8 from Studio Berlin was parked.

REDUNDANT WORKFLOW
According to André Schumann, project manager for the 2021 Bundestag election broadcast from Studio Berlin, special attention was paid to the reliability of important devices and the connection lines to the branch offices. Therefore, among other things, the picture control of the OB van was linked fully redundantly with the picture control in the ARD capital studio. In the event of a failure, the other directing unit could have taken over seamlessly. A transporter from MTI Teleport Munich and a technician stood next to the OB van. From there all fiber optic connections of the MTI teleport network ran to the branch offices in the party headquarters in Berlin and Munich, the state parliament in Schwerin, the House of Representatives in Berlin, the ARD network and the OB van. 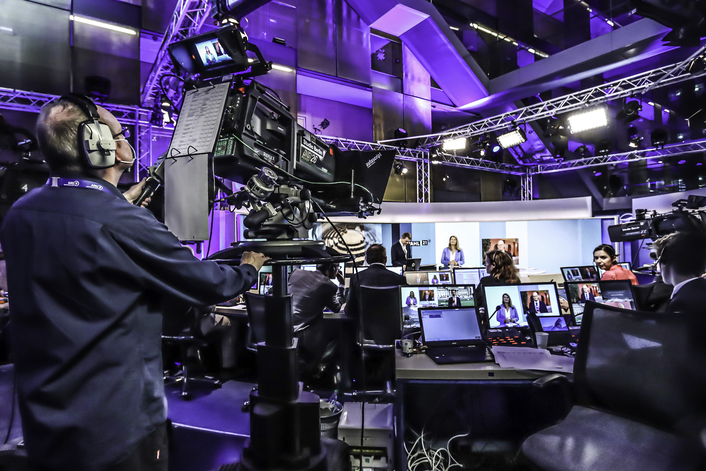 Eight Grass Valley LDX86 cameras were used for the broadcast from the ARD capital studio.

During the run-through rehearsal, the mood was still relatively relaxed. Particular attention was paid to stable and interference-free communication between all protagonists, the OB van, the ARD in-house control, the “Tagesschau” in Hamburg and all branch offices. Therefore, each switch was explicitly rehearsed with image, sound and on the day before the elections. For this purpose, a workstation for a technician from Riedel Communications was set up in one of the the OB vans, connecting to the stations in the party headquarters of AfD, Bündnis 90 / Die Grünen, CDU, FDP, Die Linke and SPD in Berlin and the CSU in Munich. For the state elections in Mecklenburg-Western Pomerania there was another stations in the state parliament in Schwerin, plus three additional stations in Potsdam, Düsseldorf and a Munich beer garden.

In the Ü8 HD, three EVS with one operator each were used. Two systems had eight channels, one had twelve channels. This ensured that all statements from politicians or interviews in a field station could be recorded at any time on election Sunday and then accessed as required, even if they took place at the same time. Infratest dimap, a company for trend and election research, took a great deal of technical and personnel effort and collected and evaluated all the data on the elections for ARD in the capital city studio and output them as TV graphics. These data were provided by moderator Jörg Schönenborn for the image direction and an 84-inch-touchscreen. All data used for the prognosis, the extrapolations and the allocation of seats that were used during the rehearsals of course still fictitious. The lighting cameraman had a couple of headlights adjusted in the studio. Then the run-through rehearsal ended with a final meeting. 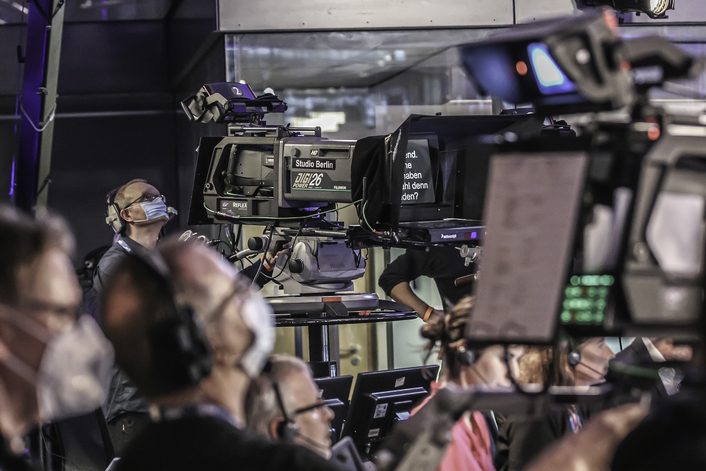 Presenter position and steadicam: in the voting studio, almost every square centimeter was occupied.

SETUP AND CAMERAS
In the ARD election studio on the first floor of the atrium in the ARD capital studio, almost every square centimeter was occupied. Meter-long cables had to be laid between the OB van, power generator and the voting studio for cameras, lighting, sound, monitors in the moderation table, video walls, several fiber optic stage boxes and network data connections for countless computers having to be invisible in the TV picture. The setup work started a week before the first rehearsal. On the previous Wednesday, the Ü8 HD from Studio Berlin was added to the setup.

ARD director Andrè Müller had eight Grass Valley LDX86 cameras available, four were on a pump, one each on a crane camera, a wireless steadicam, a shoulder camera and a camera on the roof of the capital city studio. The HD picture was produced in the OB van in 1080i and transmitted as a program to the ARD network at Hessischer Rundfunk in Frankfurt am Main via fiber optics. Studio Berlin deployed 32 employees for the TV production. All presenters of the election program and the ARD Tagesschau were equipped with headset microphones and wireless transmitters as well as in-ear systems and wireless receivers for communication. Eight wireless hand-held transmitters with a neutral blue windbreak were available for guests and politicians. The 24 external stations were connected to the sound control room of the Ü8 HD and were managed there. A total of 130 channels were mixed in stereo on a Lawo mc266 console as broadcast sound. The complex communication with 50 SIip VoIP codecs was also realized via the sound control room of the Ü8.

ARD ELECTION SHOWS ON SUNDAY
After the communication rehearsal at 3:30 p.m., there was another rehearsal, now with the moderators in costume, as well as a test of the touchscreen in the voting studio. After everything worked flawlessly around 4.30 p.m., the announcement was made that all employees had to be in standby at 5 p.m. From then on, a clearly concentrated tension was noticeable in the voting studio. "Tagesschau" head anchor Jens Riewa handed over from Hamburg to the polling studio in Berlin. Studio anchor Tina Hassel greeted the audience, while aerial shots of the government district in Berlin were shown. This was followed by preliminary reports on the federal election as well as switching to the other two elections and to the party headquarters in Berlin.

Half a minute before 6:00 p.m. you could have heard a pin drop in the voting studio – had Jörg Schönenborn not presented the first prognosis for the federal election. When the black CDU / CSU bar shot up at 6 p.m. and 25 percent were displayed, followed by the red bar of the SPD with 25 percent as a forecast as well as the four bars of the other parties and the resulting distribution of seats and there were several color games for coalitions, muted cheers were shown re-live from the SPD headquarters. After "dismay and motionlessness" prevailed in the CDU party headquarters in view of the prognosis according to Tina Hassel, the first switch was made to the CDU general secretary Paul Ziemiak, who now had the unpleasant task of explaining the poor result of his party. The ARD's first extrapolation based on the urn counts in the polling stations took place at 6.43 p.m. Accordingly, the SPD had now overtaken the Union by 0.2 points with 24.9 percent. 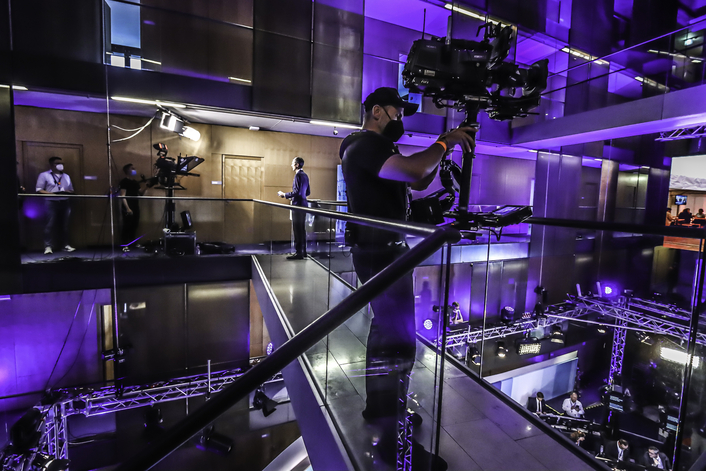 The picture control rooms in the Ü8 HD and in the ARD studio were linked fully redundantly.

GUEST MANAGEMENT
The ARD editorial team had previously discussed with the invited guests who, when and where should appear in front of the cameras in the election programs. The journey to the ARD capital studio took place independently, including security detail for state and federal ministers.

Then things had to be done quickly. The editorial assistant was already at the entrance, receiving Federal Minister Hubertus Heil (SPD) as the first guest in the ARD capital studio and instructed him on the broadcasting process. In front of the set, a make-up artist was waiting for the guests at the dressing table. After she had done her work, a sound technician with latex gloves handed a disinfected hand-held transmitter to the guest. The editorial assistant then accompanied the politician to the set and handed him over to the floor manager, who showed the guest whispering and with gestures and where exactly he should stand and who his conversation partner would be. At the sign of the floor manager, the politician was able to enter the set and position himself exactly at the planned and marked position on the moderator's table. At the end of the interview, the floor manager gave him a hand signal to step out of the set. The hand transmitter was taken from the guest by the sound engineer for disinfection. This was repeated about two dozen times into the night, including in the three issues of ARD “Tagesthemen”. 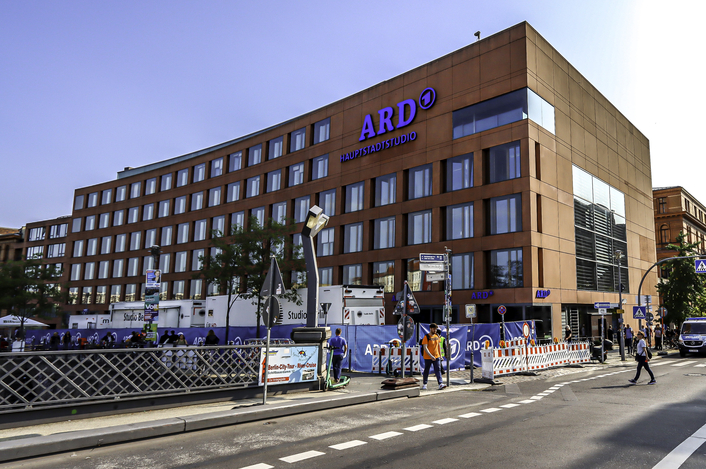 CONCLUSION
Werner Melzer, production manager of the ARD capital studio, was satisfied with the TV production of the live broadcasts in the ARD Wahlstudio in view of the special challenges: “Thanks to the good preparation and the great work of all the colleagues involved, everything went without a hitch. Despite great tension and effort, everyone had a lot of fun at work. Big thanks to the team!"

"The implementation of such a complex production both at the ARD capital studio and in the individual party headquarters is a special and unusual challenge," explains Nick Zimmermann, Managing Director of Studio Berlin, the TV production with the Ü8 HD OB van. “The preparation and coordination of this extremely important event alone took several weeks. The course of a production of this kind is sometimes unpredictable and therefore difficult to rehearse. The employees must be prepared for sometimes spontaneous events in order to be able to deal with them professionally and technically flawlessly. The high workload due to the long broadcast times and high levels of tension demands a high degree of flexibility and professional competence from the team."

The ARD election broadcast on Sunday was watched by five million viewers aged three and over, which was a market share of 21.2 percent. Among the 14 to 49 year olds there were 1.81 million viewers and a 28 percent market share. With its election programs from the capital city studio, ARD achieved a clear lead over all other TV channels and had the majority of German TV viewers watching their election broadcast.