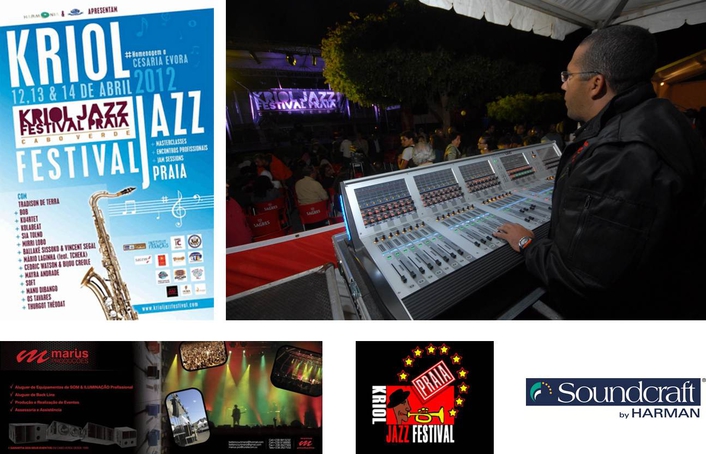 Before establishing MARIUS, Mario Bettencourt had already worked with a number of Soundcraft platforms
The municipality of Praia, located on the Cape Verde Island of Santiago, isn't the most obvious place to find a pair of HARMAN Soundcraft Vi6 digital desks. But it is here in the archipelago where Mario Bettencourt has been operating his rental company, MARIUS Produções — the largest pro audio and lighting company on the islands — for the last 13 years, and Soundcraft desks have been a central feature.

The island hosts a population of around 500,000, and although 20 percent live in the Republic’s capital of Praia, events supported by MARIUS take place throughout the country. These include a variety of music festivals, concerts, live TV and radio music shows, theatre and dance, expecting ever higher production values.

“As we are involved in practically all the big events that take place in Cape Verde, the need to make these fast stage changes and keep records of all the soundchecks in order to satisfy the artists’ demands has become paramount,” Bettencourt said. “We can be providing sound reinforcement for up to six bands a night in a festival situation, which is why I chose a sound desk that could enable me to fulfill this.”

But Mario Bettencourt didn’t rush into his purchasing decision lightly — in fact he took some time to decide. “I asked some of my technician friends who had worked with different digital mixers,” he added. “Hardiness, versatility, size, weight, design, ease of use, and quality of the processors were all carefully considered. But the Vi6 is the reference mixer in various riders that I receive.”

Since the population of Cape Verde is made up of Creoles, the recent Kriol Festival, which marked the debut of the Vi6, saw a big turnout. “By organising an event of this magnitude we can make our Festival a real reference for all Creole people,” Mario declared. “With national music headed by Cesária Évora, along with the exposure we get to a lot of world music, Cape Verde is now a real cultural melting pot.”

Before establishing MARIUS, Mario Bettencourt had already worked with a number of Soundcraft platforms, including the Series 5, Delta and Spirit. “I always liked the sound and today own an MH3 and EFX 12, as well as the two new Vi6s,” he said. MARIUS also has various BSS, dbx and Lexicon processors in its inventory, as well as AKG microphones.

But it is the Vi6 that now takes pride of place. “This all-in-one compact desk provides the easiest plug and play operation,” Bettencourt added. “It shows tremendous versatility when only one mixer is needed and the total recall feature is invaluable.”

Bettencourt said that his sound team loves the fact that it is an intuitive platform, offering a superb sound quality “and anyone can quickly familiarise themselves with it.” Having an experienced system engineer as a close associate provides him with a ready Vi6 trainer and system babysitter.

The Vi6s can now expect to be pressed into ever more versatile service as they cover everything from conferences (where MARIUS also provide simultaneous translations) to church weddings and installations.