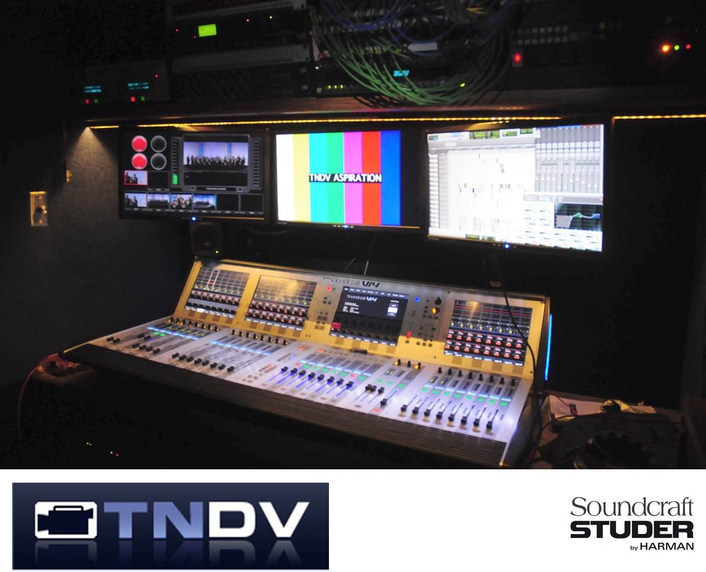 Nic Dugger, President of TNDV and 3-time Emmy® Award winner, understands broadcast technology to a depth few in the industry can match. He began his career at the age of 11, pulling cable at a west Tennessee television station. After graduating from the media technology arts program at Middle Tennessee State University (where he would also later teach), Dugger vowed to work professionally in every aspect of broadcast, from color correction to camera operator. During four years as an audio engineer, he was the A1 for National Geographic’s live multi-camera event from the Peruvian rain forest. “It was the kind of environment in which you learned to solve problems quickly, and learned what equipment you could really rely on,” he says.

All that experience went into the choice of the Soundcraft Vi4 console for Aspiration. Dugger cannot say enough about the amount of features and the sonic quality that Soundcraft has built into the small footprint of the Vi4 desk. “We knew we wanted 64 to 72 inputs, and we needed a console that has a MADI interface, since our onboard MADI router controls not only what gets recorded to multi-track to both of our multi-track recording devices but also how those inputs are grouped,” he explains. “Plus, because we do many outdoor concert events that require fast switching between artists, we needed powerful automation so the engineer can recall presets with the push of a button.”

The Vi4 gave Dugger all this functionality and excellent sound as well. “I have to keep coming back to the fact that Soundcraft got all of that into a very small footprint, which is crucial for a mobile production vehicle—every extra inch brings an extra fine from the Department of Transportation,” he jokes. “But seriously, the Vi4 gives Aspiration the audio capability we need for an HD, 3D mobile production truck. It will take us well into the future.”