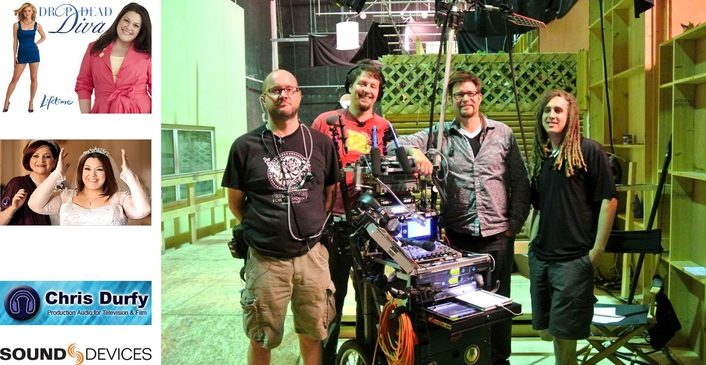 Sound Mixer Chris Durfy Depends on Sound Devices 788T for Reliable Performance
As the first-unit production sound mixer for Lifetime’s critically acclaimed series Drop Dead Diva, Chris Durfy, based in Atlanta, knows the importance of using well-built, reliable equipment capable of handling the demands of a busy production schedule. That’s why the 788T Digital Audio Recorder and CL-9 Controller from Sound Devices, specialists in portable audio and video products for field production, are permanent fixtures in his kit. He relies on the products to help him capture Drop Dead Diva’s dynamic, witty dialogue.

When he came on board for Drop Dead Diva, Durfy already had extensive mixing experience. After getting his start under the tutelage of mixer Stacy Hill, Durfy became an over-the-shoulder mixer for the television show The Mansion in 2002.  He moved on to mixing popular reality television shows, documentaries and other types of productions. Durfy later joined the local IATSE union to transition his career path to scripted work. It was upon meeting veteran feature-production sound mixer Whit Norris that enabled Durfy to pursue second unit work.

Soon after, he landed the television series Teen Wolf. Its production schedule required him to work at night, and often in ice, rain and other challenging weather conditions. After its second season, Teen Wolf moved to LA while Durfy stayed in Atlanta, working on numerous features, including What To Expect When You're Expecting, Scary Movie 5, The Good Lie and four Tyler Perry movies, further establishing himself as a production sound mixer. He was recently inducted into the Cinema Audio Society (CAS).

Much of Durfy’s work takes place on location, so the Sound Devices 788T/CL-9 configuration offers him a lightweight setup that’s easy to move around in tough terrain. Although Drop Dead Diva is studio-based, it still requires quick moves between stages, making the portable and powerful 788T and CL-9 an ideal option. “The CL-9 gives me an affordable, yet powerful solution for converting my audio bag into a cart-based mixer,” says Durfy. “For higher track count needs, I can mount a second 788T with the CL-8 above the first recorder.” 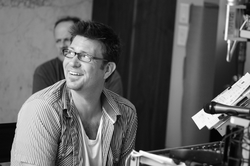 Sound Devices 788T has become the next generation digital audio recorder for advanced sound mixers that require additional isolated tracks. It boasts eight full-featured inputs and records to up to 12 tracks. The 788T accepts either microphone or line-level signals, provides 48 V phantom power for condenser microphones, offers peak limiters for microphone inputs and features fully adjustable high-pass filters—all in a compact package. Routing flexibility allows each input to be routed to left/right mixed tracks, isolated tracks or aux tracks. “The 788T has been an extremely reliable, rock-solid recorder for me,” adds Durfy. “It has rolled almost five days a week for the past four years, short of holidays and a couple of hiatuses here and there. I've been blessed with plentiful work and a recorder that can keep up with our rigorous schedule.”

The CL-8 and CL-9 Controllers complement the 788T system by adding extensive mixing capabilities, regardless of whether Durfy is working from a production bag or cart. With the addition of a CL-9, the 788T becomes a complete mixer/recording system, offering eight ultra-low-latency linear faders and rotary-input trim controls. Critical gain changes are fast, smooth and precise.

In addition to utilizing Sound Devices portable audio solutions on the set of Drop Dead Diva, each camera operator is equipped with a PIX 240 Portable Audio/Video Recorder. In its most current version, PIX 240i, it is the perfect companion, simplifying both production and post-production by bringing edit-ready Apple ProRes or Avid DNxHD recording to SD/HD-SDI or HDMI-equipped video cameras. “I think the camera guys have really come around to the PIX 240 as an official piece of camera department gear,” says Durfy. “The 788T and the PIX 240 each have ambient time code generators, so they sync up perfectly. The combination of the audio and video recorders streamlines the workflow and helps save the production a significant amount of time.”

As Durfy moves forward with other projects, he plans to continue working with Sound Devices gear. “I'm almost done building a brand-new cart based around Sound Devices’ PIX 260i, utilizing the Dante network,” he says. “Dante allows you to set up an extremely stable and redundant audio network of up to 32 channels of audio. Because of this, I think there will be more and more mixers moving into the PIX 260i realm very soon.”