Dragon TV
When the reality, cooking competition show, MasterChef China tasked Boxtop Studio Films’ Director/Producer Chad Grochowski with overseeing the design and construction of the set, contracting production equipment and international crew, and handling the post-production process for its inaugural season, he turned to Sound Devices, experts in portable audio and video products for field production, and its PIX 240 Production Video Recorder. The PIX 240 helped Grochowski ensure the highest image quality possible for the program, a collaboration between Dragon TV, Shine UK and the International Channel of Shanghai.

Known around the world, MasterChef is a massively successful reality TV franchise, with productions in more than 40 countries. Having seen many of these versions and noting that the production quality was not always consistent, Grochowski wanted to achieve the best-looking show possible. This required capturing the highest image quality, given the production’s budget and local availability of HD cameras and lenses. In addition, Grochowski was looking for a solution that would minimize the time needed for ingest and transcoding of the recorded material.

In order to accomplish this, Grochowski utilized eight to 10 Sony HDW-F900R CineAlta HD cameras, each equipped with Sound Devices’ PIX 240, to record in Apple ProRes 422 (1920x1080i 50). As the show was being edited in Final Cut Pro HD, this was especially appealing to the producers. In addition, bypassing the HDCAM compression to tape and recording the pure HD-SDI output stream with the PIX 240, enabled significant workflow and image-quality advantages.

“The ingest process using Sound Devices 240 Gb SSD drives and its PIX-CADDY couldn’t have been easier,” says Grochowski. “By using this recording media instead of HDCAM tape, we saved on tape purchase and deck rental costs during the two-and-a-half-month filming period. The PIX 240 also allowed for instantaneous dailies and provided great imagery and smooth workflow.” 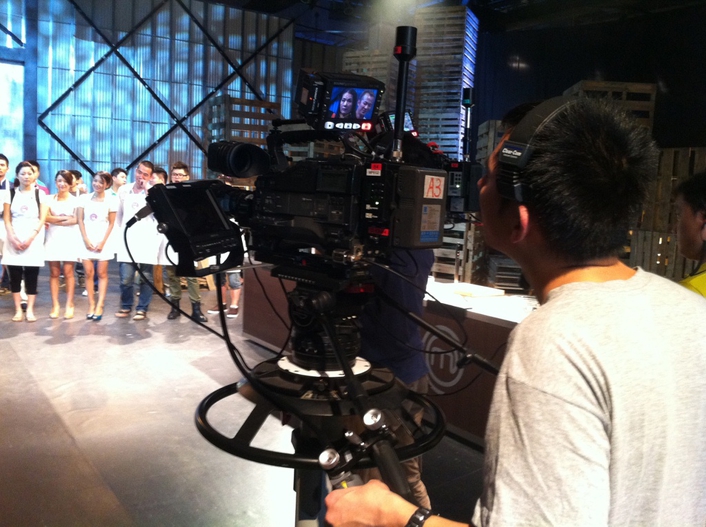 Time-code synching was also a beneficial feature on set, as all PIX recorders were synched, including up to 32 tracks of wireless microphone feeds, which were routed into a MADI-interfaced PC running Nuendo 7. With eight to 10 cameras rolling simultaneously, plus recording 12 to 32 tracks of audio, running time-of-day timecode ensured that all media were synched. In addition, the audio team utilized Sound Devices 788T with its CL-8 Mixing Control Surface to capture and mix audio during off-site filming situations.

The post production team was able to handle the Ingest and Media Management using just two PCs and an iMac. Materials were ingested directly from each PIX-CADDY via USB 3.0 and/or FW800. By using one PIX-CADDY per SSD drive, they were able to minimize wear and tear on the drive contacts, further ensuring reliable performance for the entire production.

Several key members of the MasterChef China crew also worked with Grochowski and the International Channel of Shanghai on Season 2 of The Amazing Race: China Rush, which was recently awarded the “Best Adaptation of an Existing Format” award from the Asian Television Awards held this past December.

Sound Devices PIX 240 is the perfect companion to a wide range of professional cameras used for feature films, such as ARRI and RED, as well as small-format HD cameras from Sony and Canon. Sound Devices latest update for PIX offers Apple ProRes 4444 recording from video sources over 3G-SDI (4:4:4 RGB or YCbCr). Users can connect PIX 240 and 240i to cameras with HD-SDI, 3G-SDI, or HDMI and record directly to QuickTime using a range of different Apple ProRes or Avid DNxHD codecs, including Apple ProRes 4444. Since PIX recorders use ProRes and DNxHD, files recorded in the field can be used directly in post production, making for simpler, faster workflows.

PIX 240 and 240i users now have the ability to record into Apple ProRes 4444, which offers impressive quality with 4:4:4 sources and workflows involving alpha channel transparency. With its 12-bit, 4:4:4 capability, the PIX 240 and 240i can record 330-Mbps Apple ProRes 4444 files that are perceptually indistinguishable from the original source material. Popular cameras with 4:4:4 capable outputs include the ARRI ALEXA, Canon C500 and Sony F3.

Additional features available in this latest v3.0 firmware update include time-code and recording status displays on the SDI and HDMI outputs, up to 500 ms of audio delay to compensate for multi-device picture delay, and selectable 4:4:4 or 4:2:2 video output independent from the source material.

The built-in hardware scaler and frame rate converter allows PIX to output and record material at different resolutions and frame rates than supported by the camera. Conversion between HD and SD, with and without anamorphic conversion, is available.

The audio circuitry of the PIX recorders is based on Sound Devices’ award-winning 7-Series digital audio recorders. The low-noise (-128 dBu EIN), high-headroom, high-bandwidth inputs are mic/line switchable and include limiters, high-pass filters and phantom power.