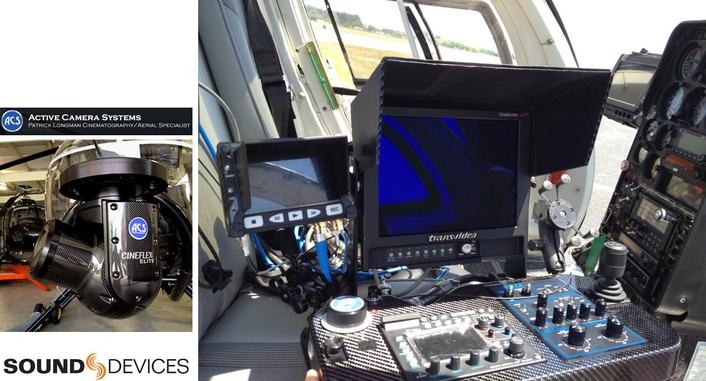 Portable Recorder Takes to the Skies to Provide Powerful Recording and Monitoring Capabilities in a Compact File-Based Unit
When Patrick Longman, cinematographer and aerial specialist at Active Camera Systems, an aerial cinematography and rental company based in Florida, was looking for a portable recorder that would fit into his helicopter's aerial photography system and provide the high-quality recording and monitoring capabilities he was looking for, he turned to Sound Devices PIX 240 recorder.

Longman first saw Sound Devices PIX 240 at the 2012 NAB show. At the time, the recorders he was using had limited feature sets, along with separate monitors and tape decks. “I wasn't happy with my existing recording equipment and felt it was time for an upgrade,” says Longman. “All of the sound recording specialists and industry experts that I have spoken with told me that Sound Devices equipment was high quality, packed with features and that their support was top notch, so I decided NAB would be an excellent opportunity to check out their products. The PIX 240 made an immediate impression on me at the show and I decided to try one out. It worked out great and I have subsequently purchased several more of them.”

Longman, who was able to mount the PIX 240 directly into the console of the helicopter, used the recorder for the recently concluded season of the hit HBO football reality show Hard Knocks, along with his Sony Cineflex camera system. This upgraded rig was used to record all of the aerial footage for the show. Longman’s aerial system soared above South Florida as it followed the NFL’s Miami Dolphins during training camp. Longman’s gear was used to shoot the opening montage, which highlights the Miami coastline and skyline. Longman also captured all the aerial footage while flying over the Dolphins’ practice field.

“In addition to its compact size, one of the features that I really like about the PIX 240 is that it has a built-in monitor, so you know that once you plug in your feed from the camera to the recorder, you got your picture,” adds Longman. “With other recorders, I would plug into the recorder and then out of the recorder to the monitor—it’s nice to just have PIX 240 directly plugged into my camera.”

Sound Devices PIX 240 is the perfect companion to a wide range of professional cameras used for feature films, such as ARRI and RED, as well as small-format HD cameras from Sony and Canon. PIX 240 connects to cameras with HDMI or SDI and records directly to QuickTime using Apple’s ProRes or Avid’s DNxHD codec. Since PIX recorders use the Apple ProRes and Avid DNxHD codecs, files recorded in the field can be used directly in post production, making the workflow simple and fast. “Another feature that I really like about PIX 240 is that it allows you to record both Apple ProRes and Avid DNxHD codecs,” adds Longman. “Since these are the two most common native files that editors are looking for, I am able to accommodate either request depending on the editor’s editing software choice, by using PIX. Being able to immediately monitor these files is also really helpful, as is the PIX 240’s ability to generate time code.”

In addition to his work on Hard Knocks, Longman's aerial photography has been used on numerous projects, including the USA Network hit show Burn Notice, as well as Charlie's Angels and various commercials, including those for AT&T, BMW and Rolex, to name a few.

Sound Devices’ PIX 220i and PIX 240i enable users to monitor an image’s exposure with Exposure Assist, a feature that displays either false-color or multi-level zebra-stripes. It comes equipped with Focus Assist, which includes a peaking filter and 1:1 pixel zoom. Monitor brightness, contrast and chroma adjustments are also now available. PIX 240i provides SD recording (NTSC and PAL) and support for using simultaneous analog and SDI/HDMI audio inputs. In addition, the PIX 240i has a built-in Ambient Clockit time-code generator/reader with genlock output for multi-camera and double-system sound applications. The source time code can be derived from the SDI stream, an external source or the built-in generator in the PIX 240i. Other key features include digital audio inputs on AES3 and an external eSATAp connection for direct connection to large SATA drives.

The audio circuitry on the PIX 220i and PIX 240i is based on Sound Devices’ award-winning 7-Series digital audio recorders. The low-noise (-128 dBu EIN), high-headroom, high-bandwidth inputs are mic/line switchable and include limiters, high-pass filters and phantom power.