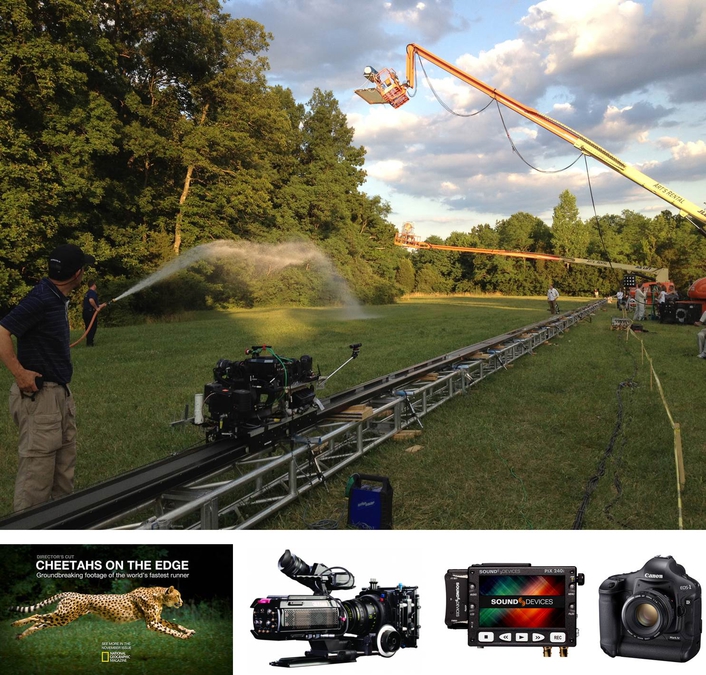 Production Video Recorder Offers Powerful Monitoring Capabilities in a Compact File-Based Unit for “Cheetahs on the Edge”
When National Geographic magazine challenged Director of Photography Greg Wilson to create a shot tracking a sprinting cheetah—in the spirit of Eadweard Muybridge’s 1878 image of a running horse—he turned to the Sound Devices PIX 240 Production Video Recorder for the shoot’s dailies, monitoring and backup.

Combining the resources of National Geographic and the Cincinnati Zoo, and drawing on the skills of an incredible crew, Wilson and his team were responsible for simultaneously capturing motion picture images as well as high-resolution stills of the cheetah for use in the magazine. Employing a Phantom Flex high-speed camera filming at 1200 to 1600 frames per second (fps), the team zoomed alongside the sprinting cheetah, capturing every nuance of the animal’s movement as it reached speeds of more than 60 miles per hour (mph). For the still images, the crew used three Canon EOS-1D X digital cameras, shooting at its fastest speed, at full resolution.

“We wanted to create beautiful images of the world’s fastest land animal using the most sophisticated technology of our day,” says Wilson. “To do so, I needed to move a camera system, configured with the Phantom camera and the three Canon 1D X cameras, all at the same speed. When in action, we needed to reach 65 mph in 40 feet, hold that speed for 300 feet and then decelerate safely back to a complete stop.” Wilson and his crew teamed up with Doggicam Systems in Los Angeles to design and build the custom dolly system that would move the camera along the 410-foot track. Using a modified version of its Super Slider System and a Sparrow 200 remote head, along with high-powered motion control motors provided by Romano Stunts, the camera was able to reach a speed of more than 65 mph in less than three seconds and then return back to a resting position accurately and safely.

Wilson’s first AC and Phantom technician Edward Richardson built a control unit for the DSLRs. “This allowed them to run in sequence at 14 fps with zero overlap of the images and a perfect cadence, allowing us to capture, effectively, 42 fps at 18.1 megapixels per frame,” notes Wilson. “We were operating with a very small crew and didn't have the resources for a standard video tape recorder in the field, so we used the Sound Devices PIX 240.”

Richardson says that he and the crew wanted the ability to reference any shot over the entire three-day job. “With the Phantom Flex, we aren’t able to review that footage without transcoding dailies. With the PIX 240, however, we had an ongoing library of all the takes.”

As is often the case when working with wild animals, Wilson and his crew faced several environmental challenges. One major concern was that the cheetahs might be afraid of all the gear, and wouldn’t run. “The cats were a bit unsure around the camera once a run was over, so we couldn’t move the camera from the end of the track until the cheetah was relaxed, which sometimes took up to an hour,” adds Richardson. “This presented a problem with saving the take. If the Phantom loses power before a take is saved, the footage is lost.”

To resolve this, Richardson used the battery-powered PIX 240 not just as a recorder, but as a portable monitor as well. After each take, Richardson walked to the end of the field with the PIX 240 and used the on-camera controls to save the take. He then recorded the shot into the PIX and brought it back to the main monitoring area for everyone to view. “Another bonus is that we then had another backup of the footage,” he says. “The PIX 240 performed flawlessly. I wish every piece of gear was this easy to prep and use. If we didn't have the PIX, we wouldn't have gotten the shots we did.” 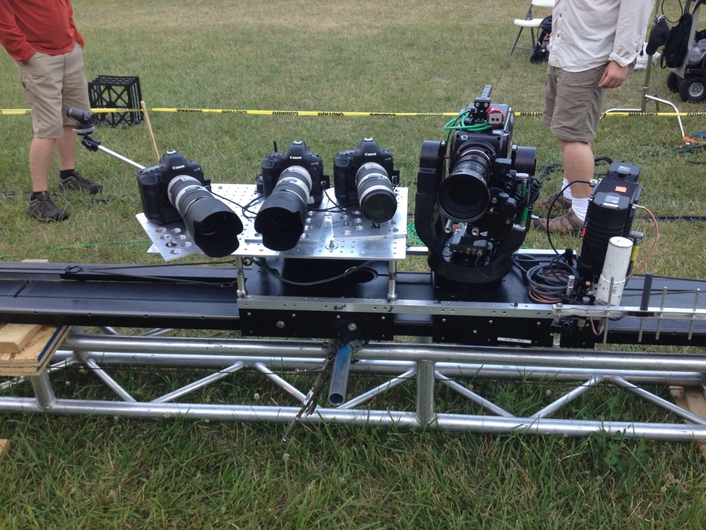 Another major challenge was syncing the dolly system with a wild animal like the cheetah. The cheetahs would chase a lure/bait attached to a long line, using a hand controlled on/off switch held by one of the cheetah handlers. At the speeds the cats were traveling, a quarter of a second or a few feet per second off and the gear could result in a hundred feet off by the time the cat hit the lit area of the track. Working with five cheetahs, it was also very difficult to anticipate how fast they would come out of the gate and what their top speed would be, among other parameters. “It was a learning process the entire time, but in working with the cheetah handlers, we were able to experiment with the speeds and timing,” says Wilson.

“Sound Devices gave us the opportunity to have a small monitor and recording device in an all-in-one product, which I could use to show the cheetah handlers our progress as we were shooting,” Wilson concludes. “I don’t like to have many monitors on set, so the PIX 240 was perfect because I could have it around my neck or on the cart and show the people not working by the main monitors what we had captured. It really brought us together as a team and kept me organized. I have a feature film and several other projects coming up, and I'll certainly be using the PIX 240 again.”

Sound Devices’ PIX 240 is the perfect companion to a wide range of professional cameras. Its high-performance, five-inch, IPS-based LCD display is an accurate field monitor, providing users with immediate confirmation of framing, exposure, focus, audio metering and setup menu selections. It offers excellent color accuracy and contrast, great off-axis visibility and accurate motion tracking. PIX 240 and 240i users have the ability to record in Apple ProRes 4444, which offers impressive quality with 4:4:4 sources and workflows involving alpha channel transparency. With its 12-bit, 4:4:4 capability, the PIX 240 and 240i can record 330-Mbps Apple ProRes 4444 files that are perceptually indistinguishable from the original source material. Additional new features available in the latest v3.0 firmware include time-code and recording status displays on the SDI and HDMI outputs, up to 500 ms of audio delay to compensate for multi-device picture delay and selectable 4:4:4 or 4:2:2 video output independent from the source material.