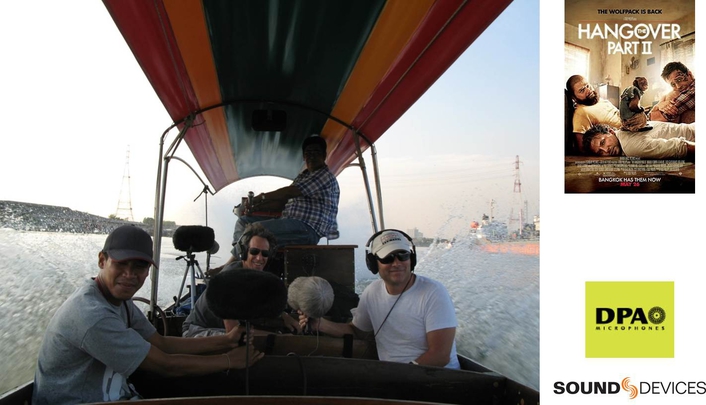 Frankley and Fasal hit the streets of Bangkok, recording everything from the bustle of the marketplaces to the sounds of the cigarette boats and tuk-tuks (open air taxis) unique to Thailand. The pair visited every location that existed in the film, as they had access to rooftops, basements, marketplaces and intersections.

The team constructed two sound rigs to cover different areas and aspects of the city simultaneously. The rigs included Sound Devices’ 788T, using six channels for the handheld DPA 5100 mobile surround mic, with channel 7 and 8 reserved for MS shotgun mics—effectively recording eight channels at all times. The rig gave the team the ability to walk into any environment with the 5.1 mic on a boom pole, holding it down low to the street or, if there was too much direct sound, raising it as high as 15 feet above the crowd.

“As far as the run-and-gun technique or being out in an environment where you are acclimating to different events that are happening and you are adjusting your setup, this rig was by far the best set I have ever recorded with,” says Frankley. “It allowed us to walk into really tight spaces and get in between things. At the end of the day, it worked out really well in post, as we had lots of useful material.” 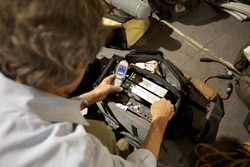 The products’ plug-and-play capabilities were a real draw for Frankley and Fasal, as both pieces of equipment work well together and are easy to integrate. The DPA microphone’s multi-pin connector breaks into clearly labeled XLRs that can be simply plugged into the Sound Devices 788T. The 788T’s isolated tracks make it the ideal recorder for 5.1 capture, as each channel of the DPA 5100 can go into the individual channel of the 788T. Another great feature of the combined products is that everything is in dead sync. With the different monitoring functions on the 788T, users can pinpoint what to listen to while recording, in terms of monitoring all five channels or just monitoring the left-right, depending on preference.

In Thailand’s walking streets, which are reserved for pedestrians and the occasional bicycle or scooter, there is always a lot of action, as the streets are filled with marketplaces and small cafes. Frankley and Fasal situated themselves in a little crevice between a couple of buildings and, using the DPA 5100, captured an incredible left-center-right happening on the street, as well as between the buildings. With Sound Devices recording these isolated tracks, the duo knew that they would be afforded a great deal of material that could later be mixed for a very unique track.

“When you are out in the field, you listen to your surroundings as if you are a microphone,” says Fasal. “When using a surround mic, you have to situate yourself so you are getting useful material in as many places as possible. When you play back the tracks, you are basically back on location, in the moment.”

Frankley says, “When you come back from recording in the field, you have a palette of all of these colors, and you are able to mix and match them, and manipulate them to fit the picture and what the camera is doing. You get these different channels and pieces and then you can accentuate them to maximize the cinematic idea.”

Frankley and Fasal have used Sound Devices gear and a collection of DPA mics for past and current film projects, including the upcoming Gangster Squad from Warner Bros. and the most recent installment of the Terminator franchise, Terminator Salvation.

About DPA
DPA Microphones A/S is a leading Danish Professional Audio manufacturer of high quality condenser microphones and microphone solutions for professional applications in studio, broadcast, theatre, video/film and sound reinforcement environments. All DPA microphones and components are manufactured at the company’s purpose-built factory in Denmark.