Sound Devices 788T Uncovers the Sounds of the Sea 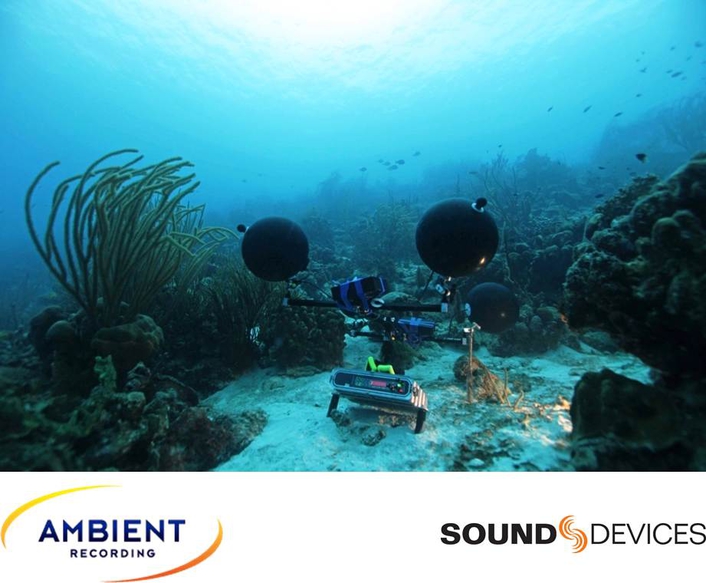 First Commercial Underwater Surround Sound Film
Recorded offshore from the Caribbean island of Bonaire in November 2011, the documentary is titled The Cannon Crackers of the Pistol Shrimp. As one of the loudest animals on the planet, pistol shrimp live in colonies of up to 16,000 and snap their claws so fast together the water around them vaporizes. They also create bubbles, which implode with a loud cracking sound. The cracking noises, along with vibrant imagery of the shrimp, form the basis of this groundbreaking film.

“The underwater world is not a silent one,” says Timo Klinge, marketing manager, Ambient Recording. “Coral reefs are filled with millions of sounds just like a jungle or a summer meadow. We knew we wanted to use Sound Devices recorders when we created our complete surround underwater rig because they are extremely compact, very rugged and have excellent sound. We created the underwater housing in order for the 788T to operate efficiently underwater.”

The Ambient Recording housing, designed for all Sound Devices 7 Series recorders, is made out of hard anodized seawater-resistant aluminum, which is then PTFE-coated, giving it the highest possible durability and stability. The top is made out of 4-cm thick Plexiglas to offer a perfect sight on all meters and displays for all Sound Devices 7 Series recorders. Power, record, stop and volume functions can be controlled through the housing. The housing is waterproof up to 100m and weighs 10kg, including the recorder, but beneath the water its buoyancy is just slightly negative, which can be adjusted by additional buoyancy bodies depending on what you attach to it.

Sound Devices high-resolution 7-Series family of digital audio recorders is the highest performance, most compact production recorders available. The two-track (702, 702T, 722), four-track (744T), and eight-track (788T) units record and play audio files with either 16- or 24-bit depth at all professional sampling rates, up to 192 kHz (up to 96 kHz on the 788T). Multiple storage mediums, analog/digital I/O, and high-speed computer connectivity make all 7-Series recorders stand out as world-class products.

“Selecting Sound Devices 7 series as the recorders to design our underwater housing around was definitely the right choice,” adds Klinge. “We have tested the rig over and over and Sound Devices' gear has consistently exceeded our expectations.”