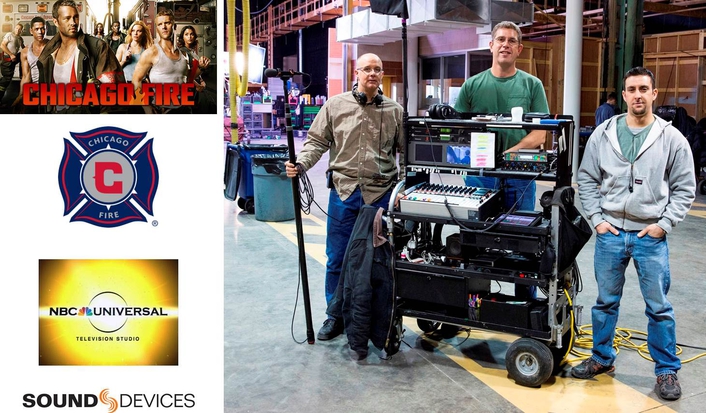 The Chicago Fire sound crew - Boom Operator Jason Johnston, Production Sound Mixer Blair Scheller and Sound Utility Jim Gaudio
When it comes to recording dynamic audio for the hit NBC show Chicago Fire, Blair Scheller, the program’s production sound mixer, turns to a range of Sound Devices gear, including its 788T and 744T Digital Audio Recorders, 552 and 442 Production Mixers, and CL-WiFi Interface for 788T, to provide a rock-solid performance and consistent deliverables. Filmed primarily at Cinespace Chicago and at field locations in and around the city, Chicago Fire chronicles the lives of the men and women of Chicago Firehouse 51.

Along with his sound team, which includes Utility Jim Gaudio and Boom Operator Jason Johnston, Scheller’s approach to production sound on Chicago Fire is typical of today’s dialog-oriented episodic productions. Much of the photography is done with two cameras, so boom mics, typically Schoeps CMITs, are not practical for large ensemble group shots. In these cases, all actors with speaking parts have a wireless microphone. Scheller utilizes 12 channels of Lectrosonics wireless with SR transmitters and Venue receivers. Wireless receivers are connected to an Audio Developments AD 146 analog console. The production recorder on set is Sound Devices 788T, recording simultaneously to both CompactFlash and the 788T’s internal hard drive. For backup, a Sound Devices 552 records the mix to SD cards. CompactFlash cards are turned in, transferred and then cleared after breaks in the day.

Compact Digital Recorder Captures Dynamic Audio in Studio and on Location Around the Windy City
“The more I can provide to post production, the better the chance of getting great audio, as the post-production team can do quite a bit with isolated tracks,” says Scheller. “We often shoot in on-location environments that may not be ideal for sound, but with both my mix- and iso-tracks, we dramatically minimize the need for ADR.” The series typically relies on ADR only for those scenes on the “fire” set, where the actors are suited with respirators.

Another important aspect of Scheller’s system is Sound Devices CL-WiFi. “The CL-WiFi is essential for the way I use the 788T. I can quickly reset after a false take right then and there with it,” he says. For more portable applications on location, Blair’s bag rig consists of a Sound Devices 744T recorder, 442 mixer, and a Lectrosonics VR field receiver.

Scheller began his career as a boom operator working on a wide range of projects, everything from local Chicago-based productions to Hollywood blockbusters. During the production of Michael Mann’s Public Enemies, Blair transitioned from boom to mixer, mixing second unit. Since then he has relied on the 788T for several shows, including the Playboy Club and MTV’s Underemployed.

Chicago Fire, produced by Universal Television and Wolf Films, airs on NBC on Wednesdays at 10/9c.