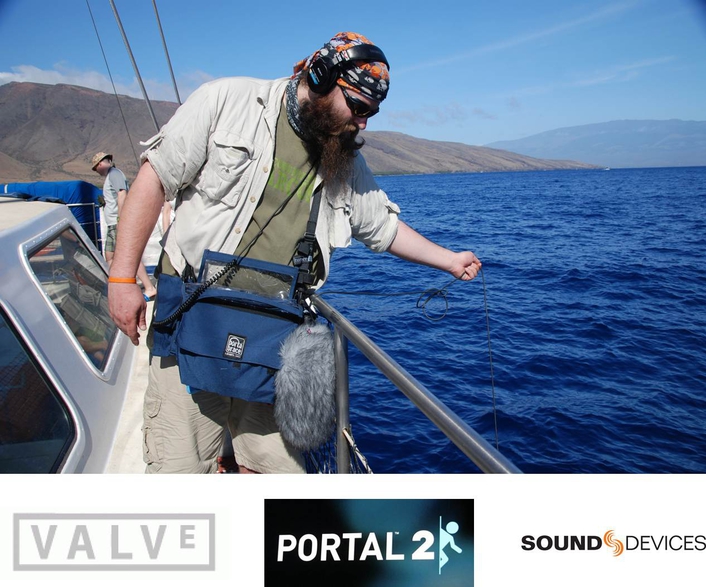 The 788T proved to be a huge help for the M-S and TetraMic setups
When Valve Software Lead Sound Designer Dave Feise needed to capture the dynamic sound effects for Portal 2, the most anticipated video game of 2011, he turned to Sound Devices 788T digital audio recorder.  Effects for the game were compiled at multiple locations for more than a year, and included such sights and sounds as water balloons in the Valve parking garage, birds at Seattle’s Woodland Park Zoo and wave sounds and whale songs in Hawaii.

In order to record the audio effects for the game the Valve audio team utilized three main setups with the 788T, including an Aquarian Audio hydrophone, a Schoeps M-S setup with the Schoeps CMIT 5U as the mid mic and CMC68 as the figure eight, and a Core Sound TetraMic. The M-S setup and the TetraMic are in Rycote windscreens and though usually mounted on a boom pole, were used instead as handhelds and also on a regular mic stand. Feise ran all of these straight into the mic inputs on the 788T, while usually recording at 24/96. The 788T proved to be a huge help for the M-S and TetraMic setups, providing multiple monitoring modes and the ability to link the gains of several channels together.

“We've used Sound Devices in the past and were really impressed with the sound quality of the recorders and preamps, and the ruggedness of them. Not to mention the fantastic support that we receive from Sound Devices,” says Feise. “We went with the 788T because we liked having eight on board pre-amps (even though we usually only use a max of four or six). We felt like the 788T was a good long-term investment and not a recorder that we would outgrow in a year or two. Games are trending towards higher fidelity audio and things like 7.1 surround sound, and the 788T can handle that and more.”

With the influx of multi-tracking both in the field and on-set, Sound Devices 788T has become the next generation digital audio recorder for advanced sound mixers that require additional isolated tracks. Sound Devices 788T boasts eight full-featured inputs and records up to 12 tracks. It accepts either microphone or line-level signals, provides 48-V phantom power for condenser microphones, offers peak limiters for microphone inputs and features fully adjustable high-pass filters — all in a compact package. Routing flexibility allows each input to be routed to left/right mixed tracks, isolated tracks or aux tracks. The 788T has several options for recording media, including an internal 160 GB SATA hard drive (256 GB SSD in the 788T-SSD), CompactFlash media with UDMA support, an external FireWire hard drive or DVD-RAM (with bus powering). Any or all of these can be used simultaneously.

Additionally, when connected to Mac OS or Windows computers with high-speed USB or FireWire 400/800, the 788T functions as a high-speed mass storage device. To simplify interconnection with mixers and cameras with AES3 connectivity, the 788T has eight channels of balanced AES3 digital input and six channels of balanced AES3 output. The 788T can be clocked from an external word clock or from video sync. The 788T is also equipped with a high-accuracy time code reader/generator on board. It also includes auto-record features to chase external rec-run video sources. To simplify metadata entry, the 788T directly accepts USB keyboards. Keyboard shortcuts can be programmed to control menu items and machine transport. The 788T, like all Sound Devices products, is versatile and designed to withstand the physical and environmental extremes of rigorous field production.

The Valve audio team, which includes Feise, Senior Sound Designers Tobin Buttram and Tim Larkin, Sound Designers Marcus Egan and Kelly Thornton, Composers Mike Morasky and Jason Hayes, and Voiceover Recordist/Editor Bill Van Buren, is currently using the 788T for sound effects gathering for the upcoming action fantasy strategy video game, Dota 2.  Feise added the Sound Devices CL-WIFI iOS software app to his rig for locations that are in the field, but that don’t require a rig to be worn while recording. The CL-WIFI works together with its companion iOS software app to allow iPads, iPhones and iPod Touches to control a connected 788T. The CL-WIFI turns an iOS device into a simple, portable control surface that allows a sound mixer to move around on set, away from the sound cart, yet still have extensive control and monitoring of their 788T recording system.

“The 788T has worked flawlessly since day one,” adds Feise. “The features that really stand out for us are the ones that make it so easy to use, such as the channel gain linking, the channel selection toggle switches on the front and the information-loaded but uncluttered UI. There is not always a lot of time to set up and get levels when gathering sound effects on the fly, and the 788T makes it easy to roll and set up as you go. The addition of the CL-WIFI to our rig for Dota 2 further reinstates the portability and ease of use of Sound Devices products in the field.”