Soularity Sound Upgrades To 5.1 With JBL 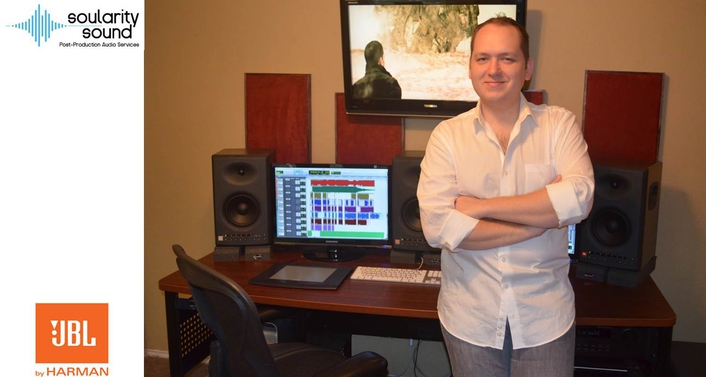 When Pereira decided to equip the Soularity Sound studio with 5.1, he needed a monitor system that would enable his mixes to accurately translate to the theatrical screen. “While there were several other solutions on the market, I decided the best setup for me was five JBL LSR4326P monitors and an LSR4312SP subwoofer,” Pereira said.

Pereira’s recent credits include Incendiary: The Willingham Case, a feature documentary that was screened at the South by Southwest Festival and went on to a limited US theatrical release. Currently, Pereira is working on The Ascendant, a short science fiction film with an abundance of visual effects and impactful sound cues.

“Even in my small space, to monitor the dynamic range of a dramatic film soundtrack, I need to have enough headroom from my monitors so that I don’t have to worry about the speakers, especially the subwoofer, distorting,” Pereira noted. “With a short-term max SPL of 112 dB for the LSR4326P and 125 dB for the LSR4312SP, I know I have ample power for even the most dynamic mixes.”

The LSR4300 System’s built-in RMC Room Mode Correction coupled with the Control Center Software allows Pereira to tune the speakers precisely to his room. “I have four presets for the space,” he said. “I measured the room from both the mix position and a couch, and stored a preset for these positions calibrated to both theatrical and broadcast specs. I can pull up the Control Center Software and choose where I want to focus the sweet spot.”

“For anyone doing multichannel mixing in a small-to-medium sized room, the LSR4300 Series Monitors are the perfect way to go,” Pereira concluded.