Affordable memory-based workflow for studios and broadcasters
Sony today announced its new PMW-1000 Memory Recording Deck in response to the ever-increasing memory-based video production on camcorders such as the PMW-500. Following the recent launch of Sony’s XAVC codec, this half-rack sized recorder, with two SxS memory card slots and VTR-like jog/shuttle operations, enhances Sony’s memory-based workflow and is suitable for both in-house and field operation.

The PMW-1000 combines an affordable future-proof workflow capability with ease of operation
Due to its versatility, the PMW-1000 meets the needs of broadcasters and individuals in studio or Outside Broadcast vans, and is suitable for the production of commercials, documentaries, or corporate and education videos, at an affordable price.

“Last year we introduced the PMW-50 SxS field gear to expand support of XDCAM HD422 video production in the field. We also introduced our new open codec XAVC, already implemented in the PMW-F5 and PMW-F55 CineAlta cameras. The PMW-1000 studio recording deck is the next natural step to bring enhanced and easy workflow support,” said Fabien Pisano, Strategic Marketing Manager, Sony Europe. “The versatility of the PMW-1000 in terms of interfaces, coupled with linear-like operation and the ability to record the XAVC HD format on SxS media, make it an ideal choice for broadcasters and production houses looking for an affordable, quality production solution or for a smooth transition from SD to HD.”

The PMW-1000 is the perfect future-proof partner to the PMW-500, the lightest CCD camcorder available, and the PMW-200 camcorder.

Smooth migration from SD to HD
PMW-1000 users can select recording and playback formats from HD (XAVC, MPEG HD422 and MPEG HD420 50/35/25Mbps) and SD (MPEG IMX 50/40/30Mbps* and DVCAM 25Mbps) in a variety of frame frequencies. This flexibility can help to save on investment costs as broadcasters move towards HD operations. In addition, with its up-and-down conversion function, the PMW-1000 is ideal for integration into existing SD production systems that are looking to upgrade to HD in the future. 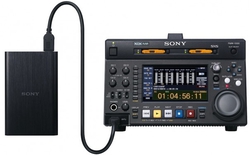 XAVC HD support
Besides MPEG HD422, the PMW-1000 also supports XAVC Intra HD record/playback**, enhancing the XDCAM HD workflow in the operation of cameras such as Sony’s new PMW-F5 and PMW-F55 CineAlta cameras. The PMW-1000 is currently the only recorder which can record the XAVC HD format on SxS media***. It can also playback XAVC HD recorded content on professional monitors.

Enhanced XDCAM HD422 workflow even in linear operations
Non-linear production has become increasingly popular, and the role of the recording deck is now less significant in non-linear environments. However, linear-like operations are still required especially by broadcasters. The PMW-1000 drives enhanced XDCAM HD422 workflow with tape-like operation including linear ingest with RS-422 control and linear editing (as player) with jog/shuttle control. This similar operability to tape-based devices brings familiarity to operators. The VTR-like jog/shuttle dial and RS-422 control also come into play when ingested in baseband through an ingest controller at broadcast stations where a content server may be in operation. The PMW-1000 also provides outstanding MPEG HD422 picture quality as well as a high quality eight channel (HD-SDI) 24-bit audio recording capability, all packaged in a compact deck.

Numerous interfaces for versatile operation
The PMW-1000 provides a wide range of AV and IT interfaces including HD-SDI, SD-SDI, HDMI, and composite outputs. An RS-422 interface enables the PMW-1000 to be used as a feeder for linear editing while a Gigabit Ethernet (1000BASE-T) port allows for high-speed file transfer in network or non-linear operations. The PMW-1000 also includes a HDMI output at the rear for easy monitoring on HD displays. A USB interface located on the front panel enables easy connection of external USB HDDs without a PC for the direct copying of clips, saving unnecessary costs and simple, quick copying or backup.

Another feature of the PMW-1000 which makes it highly versatile is its three-way power source selection. It can operate on AC, DC or battery power, and so can be used in both in-house and field operations such as studio or OB productions. The PMW-1000 will be available in Europe from April 2013 onwards.