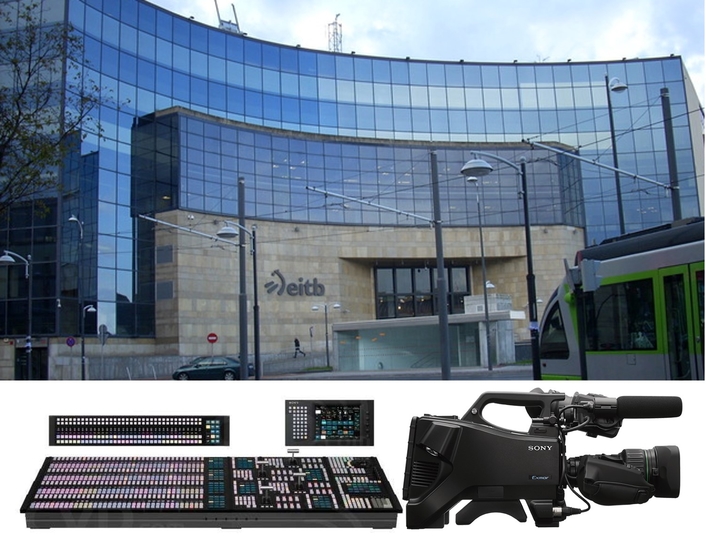 uskal Irrati Telebista group (EiTB), leading media group in the Basque Country, has signed an agreement with Sony for the complete renewal of video mixers and High Definition cameras at its TV production centres in Bilbao and San Sebastián. To be delivered in phases between 2018 and 2019, the project includes four Sony XVS-7000 mixers, one XVS-6000 mixer and 33 HXC-FB80 Full HD studio cameras.

ETB (Basque Television) needed to renew its existing video mixers that were at the end of their useful life, being unable to produce programmes in High Definition (HD) quality. Therefore, for Studios 21 and 26 in San Sebastián and 01 and 02 in Bilbao, Sony is supplying XVS-7000 mixers configured with four banks M/E, while Studio 23 in Miramón will feature the XVS-6000 including two banks M/E, with otherwise identical technology and architecture

nput configuration of all Sony XVS series mixers is extremely flexible, allowing operation with SDI interfaces as required by EiTB for this project, but also allowing working in IP (SMPTE ST 2110) or 12G-SDI. In addition, all mixer inputs have been configured with Format Conversion, RGB Colour Correction and Frame Delay capability. In addition all switchers and FB80 camera chains are 4K ready, allowing EiTB to upgrade to UHD operation in the future.

All mixers are configured with the ICP-X7000 control panel. Its modular design can be customised according to the preferences of each operator, allowing separation of each M/E bus for a completely independent installation with its own IP connection.

Sony is also supplying 33 camera chains featuring the HXC-FB80 through its partner Telefónica Servicios Audiovisuales. Three latest-generation 2/3″ Exmor CMOS sensors in each camera achieve 1920 x 1080 resolution, with a sensitivity of F13 at 2000 lux (1080/50i) and a signal-to-noise ratio of -60dB. The HXCU-FB80 camera control unit (CCU) supports High Definition and Standard Definition working, with outputs in Ultra HD and HDR.

Héctor Sierra, Sales Manager of Sony Europe, welcomes the confidence placed by EiTB in the quality and performance of Sony’s professional equipment. In addition, he mentions: “The highlight of Sony’s proposal is that it brings together the latest technology in High Definition, prepared for the future (Ultra High Definition, HDR, IP, 12G-SDI, etc) with a service proposal of extended support that will guarantee for many years the validity of an investment as important as the renewal of all TV production studios of EiTB. ”

This new acquisition provides EiTB with Sony’s latest generation hardware for television production, fulfilling the objective of maintaining the media group’s commitment to quality and audiovisual innovation in all its content. The supply of mixers and video cameras will be delivered in successive phases through to 2019.