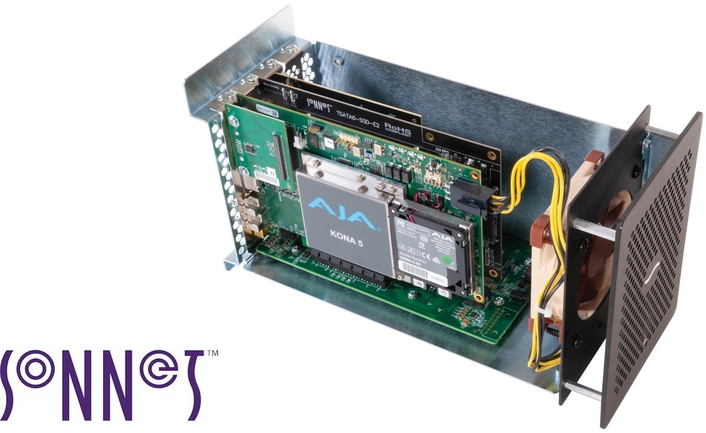 Sonnet Technologies today announced the launch of the Echo™ Express SE IIIe, the newest member of the company's award-winning Echo Express family of Thunderbolt™ 3 to PCI Express® (PCIe®) card expansion systems. The Echo Express SE IIIe is a compact desktop chassis that enables the use of up to three high-performance PCIe cards with computers equipped with Thunderbolt 3 ports. Replacing the popular Echo Express SE III, the SE IIIe supports AJA's complete family of KONA audio and video I/O solutions, including KONA 5, and has been upgraded with the addition of an auxiliary power connector to support cards that require more power to operate, and a new cooling fan for quieter operation.

What It Does:
The Echo Express SE IIIe enables users to connect three PCIe cards to computers lacking PCIe card slots. The SE IIIe features three x8 PCIe 3.0 slots, accommodates full-height, half-length+ (up to 7.75 inches long) PCIe cards, and connects them to a computer's Thunderbolt 3 port via the included 0.7-meter Thunderbolt 3 (40Gbps) cable. With the addition of the auxiliary power connector, the SE IIIe now supports popular pro video I/O cards that were previously incompatible due to their extra power requirements. The SE IIIe provides two Thunderbolt 3 ports, with one reserved for connection to the computer, while the second supports daisy chaining of up to five additional Thunderbolt peripheral devices plus two 4K monitors or one 5K display, or a single USB device. The system provides up to 15W of power to any connected peripheral or host.

Why It's Important:
Many pro video and audio users depend on notebook and laptop computers for their work, relying on outboard equipment connected to their computer — such as video capture and playback and audio DSP devices, for example — for connecting additional inputs and outputs, and processing data. Frequently costing much less than standalone devices, PCIe cards — originally designed for use in desktop computers — often mirror the functionality of outboard equipment, but cannot be installed into a portable computer. Sonnet's Echo Express SE IIIe enables users to save space and money by mounting three PCIe cards in a compact, portable enclosure, and connecting them to their computer through a single cable. The SE IIIe now features a Noctua NF-R8 redux-1800 fan, known for its low-noise operation, making the Sonnet chassis more suitable for use in noise-sensitive environments.

How It's Unique:
The Echo Express SE IIIe is the smallest multislot Thunderbolt-to-PCIe card expansion system available. It is also the only compact desktop Thunderbolt 3 expansion system with the auxiliary power connector required by certain PCIe cards — such as the AJA KONA 5 — in order to operate, a feature previously limited to Sonnet's full-size Echo Express III-D.

When You Can Get It:
The Echo Express SE IIIe (part number ECHO-EX-SE3E-T3) is available now at the suggested retail price of $499.99.

About Sonnet Technologies
Sonnet Technologies Inc. is a leading provider of Thunderbolt™ 3 to PCIe® card expansion systems; external graphics (eGFX) solutions for pro users and gamers; pro media readers; docks and adapters; and network, storage, and other interface cards for pro users in the audio, video, and broadcast industries. Sonnet's Thunderbolt expansion products enable the use of pro audio I/O and DSP cards, pro video capture and transcoding cards, GPU cards, network and storage interface cards, and other high-performance PCIe cards with Thunderbolt technology-enabled computers. For more than 30 years, Sonnet has pioneered and brought to market innovative and award-winning products that enhance the performance and connectivity of Mac®, Windows®, and other industry-standard computers.