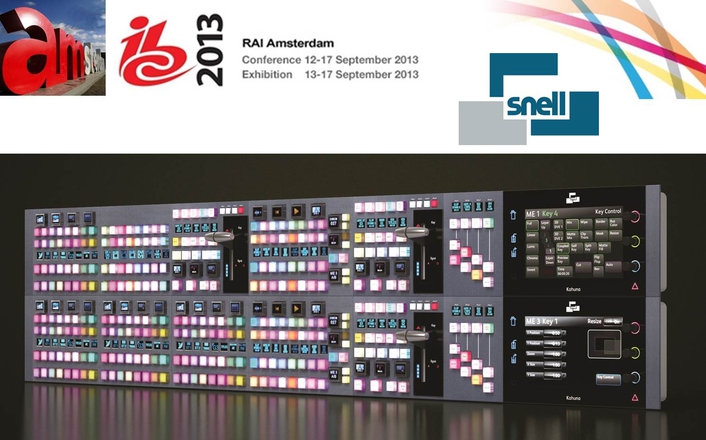 New Panels Support the Largest, Multiple-M/E Live Productions in Smaller Space, With Flexibility to Build Control Interface Conforming to Specific Production Needs
"Maverik throws away the rule book for how a switcher control panel should be configured by splitting the key elements into smaller modules. With a groundbreaking new architecture that allows total customization, operators can put together the modules that make sense for their production and provide the quickest access to multiple key functions," said John Carter, senior product manager, Snell.

Maverik is a complete departure from a traditional switcher control surface that typically combines multiple M/Es together with a setup and effects area in a fixed configuration, with a fixed set of buttons for each. Instead, the Maverik modules can be assembled in a huge variety of configurations, and without expending precious desk space. For instance, a chroma key is a simpler operation that requires minimal resources; yet, the operator would have to dedicate a full M/E to the function using a traditional panel. Maverik also features modules for setup, effects recall, color correction, resizing, and clip store access, functions that typically occupy the entire right side of a traditional panel. Other Maverik innovations include crystal clear OLED buttons with user-assignable thumbnails, for quick navigation, a touch-screen at the M/E level rather than on the separate GUI, and the ability to assign RGB values to buttons for clean, clear, and confident operation.

With Maverik, operators can support the largest multiple-M/E productions with a smaller control surface — saving valuable real estate in space-restricted OB vehicles that are designed to be as lightweight as possible. In addition, the modular panel configurations enable more flexibility for the multi-media and multi-platform operations that are redefining today's broadcasting, giving operators the option of switching the traditional broadcast together with other video streams from a central control point, or spreading them out in a more distributed fashion.

In the studio, Maverik offers complete flexibility to design the control surface in the manner in which the studio is laid out — making live production more efficient and intuitive. For instance, a studio with video monitors on the left and right sides of the console requires a separate M/E to drive each monitor. With Maverik, the operator can deploy a module on each side in a horizontal configuration, for each monitor.