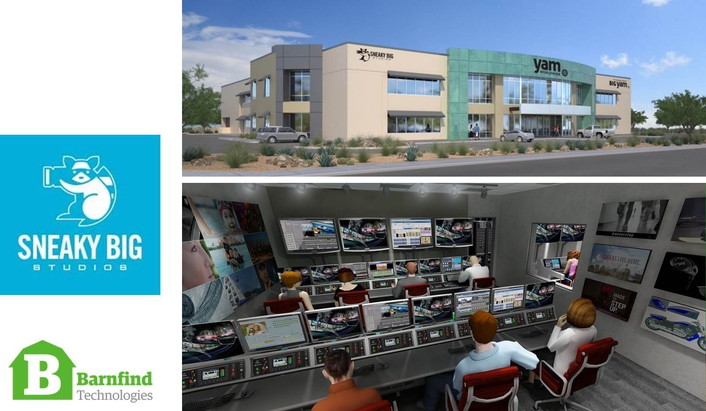 Barnfind Americas, manufacturer of a multi-functional, signal neutral fiber transport platform, has been tapped by Arizona’s Sneaky Big Studios to provide a network of fiber signal transport solutions at the heart of its infrastructure. Sneaky Big Studios, one of the largest and most technologically advanced production facilities ever built in the region, will open in July 2016.

“Since technology is a moving target these days, Sneaky Big Studios wanted to make sure its facility would remain as flexible as possible and be able to stay current without having to constantly upgrade its entire infrastructure,” says Joe LoGrasso, vice president of sales, Barnfind Americas. “The Barnfind solution accomplishes this. Using the Barnfind BarnOne, Sneaky Big Studios can customize each room in the facility according to its current needs, and save on future upgrades with its ability to simply swap out SFPs.”

The Studio is using fiber to connect all of the video equipment which enables faster processing of the information. All of the signals coming in or out of a specific room can be multiplexed within the Barnfind frame and sent over a single strand of fiber to the Central Equipment Room (CER). From there, the built-in 32x32 router sends the signals to their destination, providing an additional measure of workflow flexibility. Everything is controlled by a simple web GUI.

“As a state-of-the art facility, the system we ended up choosing had to be able to support 4K workflows,” says Stephen Brain, vice president and general manager, Sneaky Big Studios. “After speaking with the team at Barnfind Americas, it was apparent that the Barnfind System would address all of our needs and concerns, and be able to offer us the flexibility and expandability we would need to continue to grow our studio. Barnfind was chosen for its  unique BarnOne frame allowing us to take multiple video, audio, and data formats, mux them onto a single fiber line and route them.”

BarnOne Frames are equipped with a full 32 x 32 crosspoint matrix that can route, switch and duplicate any optical or coaxial input to any output. They provide re-clocking on all outputs (BNCs and SFPs), reference input, full redundancy, and the capability to have integrated CWDM/DWDM multiplexing. Barnfind offers many cost-effective SFPs (Small Form Factor Pluggable), and is compatible with other manufacturer’s MSA compliant SFPs. Flexible control is available with the included BarnStudio software, or by 3rd party solutions.

“Many key features converged to make this an ideal and future-proof solution for Sneaky Big Studios,” continued  LoGrasso.  “Its ability to swap SFPs as needed keeps the technology consistently current. Mux/demuxing signals on only one fiber strand drastically reduces the wiring infrastructure typically necessary for this type of installation, and the internal router boosts workflow flexibility to a whole new level.”