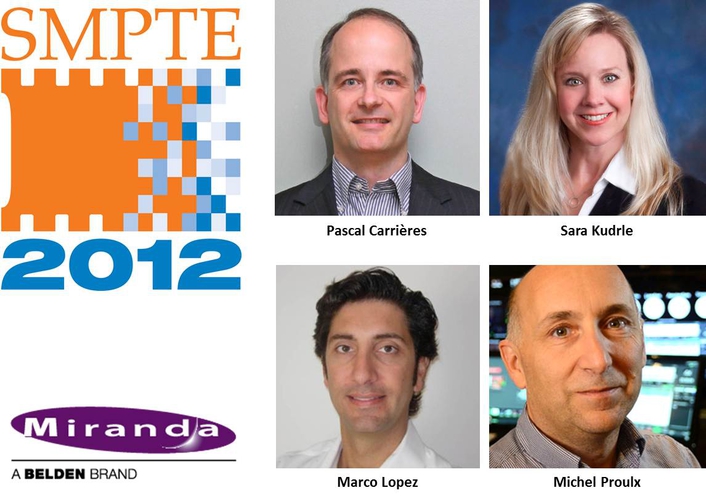 .
Miranda Technologies Inc., a Belden (NYSE: BDC) Brand, global provider of integrated solutions for production, playout and delivery systems for television broadcasters and multi-system operators, has announced that a technical paper written by Miranda technologists has been selected by the Society of Motion Picture and Television Engineers (SMPTE) as the recipient of the SMPTE 2012 Journal Award. The award is presented to the author of the most outstanding paper originally published in the SMPTE Motion Imaging Journal during the preceding calendar year.

According to Kudrle, “Media fingerprinting can provide far-reaching benefits for content creators, providers and distributors. In the paper, we discussed those benefits, as well as how professional standardization could facilitate the application of fingerprinting techniques to other media management challenges.”

Strath Goodship, president and CEO of Miranda, said, “Synchronization issues have been an ongoing annoyance for broadcasters and viewers alike. I am proud that we have the intellectual depth and commercial acumen to address those issues; and to be honored by a body of professional peers for our contribution to the discourse is deeply gratifying. I sincerely congratulate the individual efforts of all who contributed, but the highest praise is the public acknowledgment of their work by SMPTE.”

Kudrle and Carrières will be on-hand to receive the award at the Society’s Honors and Awards Ceremony during the SMPTE 2012 Annual Technical Conference and Exhibition, taking place October 23-25, 2012, in Hollywood. Miranda will take part in SMPTE 2012, at Booth 214, where it will highlight the benefits of its playout technologies.

About Miranda
For over 22 years, Miranda Technologies has been a leading worldwide provider of hardware and software solutions for the television broadcast, cable, satellite and IPTV industry. Its solutions span the full breadth of television operations, including production, playout and delivery. With a wealth of experience in delivering IT-based and traditional television systems, Miranda leverages its expertise to create the highest quality solutions available and delivers, deploys and supports them with a company-wide commitment to keeping the customer first. Miranda was acquired in July 2012 by St. Louis-based Belden Inc. and is the cornerstone of its broadcast division.  Belden is a worldwide leader in the design, manufacture and marketing of cables, connectivity and networking products for many industries including broadcast, entertainment, consumer electronics, education, transportation and industrial automation.