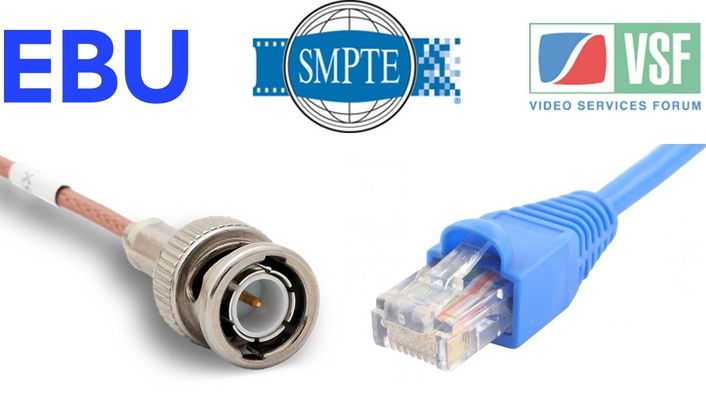 Task Force Aims to Enable New Business Opportunities Through Standardized Exchange of Professional Media Across Networks
The Society of Motion Picture and Television Engineers (SMPTE), the worldwide leader in motion-imaging standards and education for the communications, media, entertainment, and technology industries, announced the formation of the Joint Task Force on Networked Media (JT-NM) in collaboration with the European Broadcasting Union (EBU) and Video Services Forum (VSF).

The JT-NM will engage manufacturers, broadcasters, industry standards bodies, and trade associations to map out a strategy for developing a packet-based network infrastructure for the creation, storage, transfer, and streaming of professional media.

Peter Symes, SMPTE director of standards and engineering, will join Hans Hoffmann of the EBU and Brad Gilmer of VSF in leading the task force. Representing and leading industry, users, and standards bodies, the task force will apply a phased approach to meeting its primary objective: ensuring interoperability in packet-based systems (networking, equipment, and software) for professional media.

"SMPTE already has partnered with the EBU and VSF in the creation of standards for video over IP, and we are delighted to be collaborating once again in forming this new task force," said Symes. "Recognizing that the industry is moving quickly toward a fully networked environment, the Joint Task Force on Networked Media will facilitate coordination of user requirements among all of the stakeholders. This work will not only help us to identify additional SMPTE standards needed by the industry, but also facilitate a more efficient and timely standards-development process."

The JT-NM will define an agile, on-demand, packet-based network infrastructure designed to support a variety of distributed, automated professional media (file- and stream-based) workflows for local, regional, and global production. By supporting any standards-based format, the infrastructure will assure the interoperability necessary to facilitate new workflows, reduce total cost of ownership, and speed content time-to-market.

The task force will pursue this objective in three phases:
• Phase 1: Define the business-driven use cases and requirements
• Phase 2: Define the framework and reference architecture
• Phase 3: Define and coordinate the tasks to realize the output of phases 1 and 2

Further information on the joint task force is available by email to JT-NM@smpte.org.

About the Society of Motion Picture and Television Engineers
The Oscar® and Emmy® Award-winning Society of Motion Picture and Television Engineers (SMPTE), a professional membership association, is the worldwide leader in developing and providing motion-imaging standards and education for the communications, technology, media, and entertainment industries. An internationally recognized and accredited organization, SMPTE advances moving-imagery education and engineering across the broadband, broadcast, cinema, and IT disciplines. Since its founding in 1916, SMPTE has published the SMPTE Motion Imaging Journal and developed more than 600 standards, recommended practices, and engineering guidelines. SMPTE members include motion-imaging executives, engineers, creative and technology professionals, researchers, scientists, educators, and students from around the world.