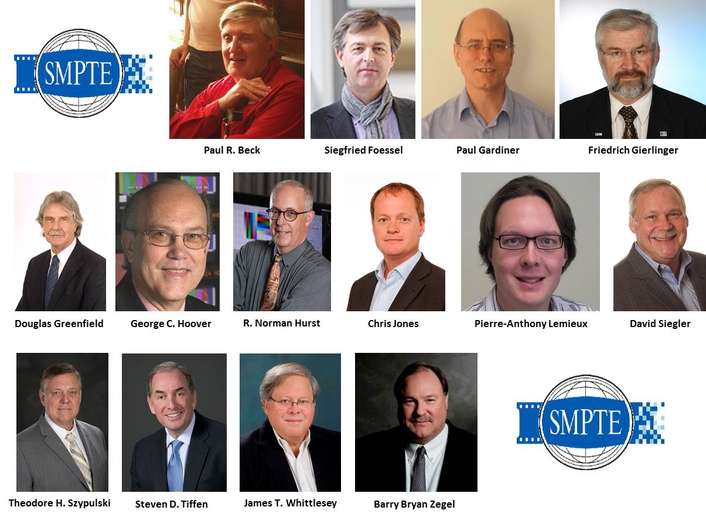 14 Exemplary Members of Motion Picture, TV, and Related Industries
The Society of Motion Picture and Television Engineers (SMPTE), the worldwide leader in motion-imaging standards and education for the communications, media, entertainment, and technology industries, has awarded the Fellow grade of SMPTE membership to 14 industry leaders. Fellow status is conferred upon individuals who have, by proficiency and contributions, attained an outstanding rank among engineers or executives in the motion picture, television, or related industries.

New SMPTE Fellows will be inducted on Wednesday, Oct. 23, during the Fellows Luncheon, and further recognized on Thursday, Oct. 24, at the SMPTE Honors and Awards Ceremony. Both events are taking place in conjunction with the SMPTE 2013 Annual Technical Conference & Exhibition at the Loews Hollywood Hotel in Los Angeles.

Paul R. Beck, president and chairman of Foxboro Cable Access Inc., has worked in the broadcasting community since 1965, holding various technical, operations, and management positions at The Boston Catholic Television Center Inc., WSBK-TV, and WHDH-TV, as well as at his alma mater, Emerson College. Beck has been a member of the New England Section of SMPTE since 1977 and, representing the IAVA and AVMA, has served as a technical liaison for PH-7 technical standards. He is a co-founder of the Museum of Broadcast Technology and a film/video archivist/producer for the New Haven Railroad Historical and Technical Association Inc.

Siegfried Foessel of the Fraunhofer Institute for Integrated Circuits (IIS) is an expert in digital cinema and media technologies. He has led critical projects including the DCI Compliance Test Plan, and JPEG 2000 standardization for digital cinema, and continues to shape the industry through his leadership and participation on the ISO SC29/JPEG systems group, EDCF technical board, and FKTG standards body.

Paul Gardiner has been a central figure in regulatory oversight and licensing for commercial television in the United Kingdom, serving first with the Independent Broadcasting Authority (IBA) and its successors, Independent Television Commission (ITC) and Ofcom, where he focused on technical standards and information. Now with Sony, Gardiner has been involved with the AMWA-EBU FIMS project and is co-chair of the FIMS Technical Board; a U.K. delegate to ITU R Working Party 6C, with a particular interest in UHDTV; and co-chair of SMPTE TC-10E Essence.

Friedrich Gierlinger has been with the IRT, the research and development institute for public broadcasting corporations in Germany, Austria, and Switzerland, since 1979. He was involved in the development and standardization of measurement techniques for analog and digital television, and currently specializes in quality measurement/control and display technology. He chairs Germany's national system and measurement expert group; participates in other expert groups focusing on measurement, quality control, and UHD; and is a member of several SMPTE committees.

Douglas Greenfield of Dolby Laboratories Inc. has contributed to the development of professional film-dubbing equipment, miniature noise-reduction modules for C-format VTRs, and the Dolby SR single-channel and multitrack modules. The recipient of numerous awards related to motion-picture sound technology, Greenfield is active in digital cinema standSiegfried Foesselardization efforts (SMPTE TC-21DC) and serves as a member of AES, SMPTE, and AMPAS. He is responsible for Dolby programs in motion-picture postproduction and motion-picture exhibition, and special projects including 3D presentations.

George C. Hoover, chief technology officer at NEP, is known for his extensive experience, exacting standards, and unparalleled technical engineering and design expertise, all of which have influenced virtually all areas of sports and entertainment television over the past two decades. He has earned four Emmy® Awards, and in 2011 was inducted into the Sports Broadcasting Hall of Fame. Hoover is a member of the Academy of Television Arts and Sciences and the American Institute of Architects. Along with Jim Boston, he is the co-author of "TV on Wheels: The Story of Remote Television Production," the second edition of which is being published in October 2013. Along with Boston he also co-authored the NAB Engineering Handbook section on remote television engineering.

R. Norman Hurst is a principal software engineer for the products and services division at SRI International, where he developed video test and measurement products including the Visualizer™ digital video test pattern (in use by all major networks), a 3D test pattern suite, and the TG-100™ uncompressed video player with A/V test patterns. He holds 35 U.S. and many international patents, and earned a Technology and Engineering Emmy® Award for developing the MPEG Compliance Bitstreams DTV testing technique. He is involved with standards bodies including SMPTE, ATSC, MPEG, and ITU-R.

Chris Johns, chief engineer for broadcast strategy at BSkyB, has led the evolution of the Sky platform from the launch of its multichannel analog satellite offering in 1989 to its HD launch and delivery of 3D broadcasts to the home. In addition to sitting on many broadcast groups and societies, Johns chairs the U.K. section of SMPTE and is an Honorary Fellow of the BKSTS. His current focus is helping Sky to enhance the entertainment delivered across a multitude of platforms from a common core while maintaining or improving audio and visual quality on an array of devices.

David Siegler, vice president of technical operations for Cox Media Group (CMG), manages CMG's Technical Operations groups to integrate new technologies and processes across various platforms for CMG's 14 broadcast television stations, one local cable station, 57 radio stations, and eight daily newspapers. He serves as a vice-chair of the ATSC Board of Directors and chair of the ATSC 2.0 Implementation Team; a member of NAB's Radio and Television Technology committees; and chair of NAB's Next-Generation Broadcast Platform Task Force. He is also a member of the AFCCE, SMPTE, SBE, and the IEEE.

Theodore H. Szypulski has been in the broadcast industry for more than 43 years, working at radio and television stations, equipment manufacturers, system integrators, and, for the past 22 years, at ESPN Inc. The Society of Broadcast Engineers has certified him as a "Professional Broadcast Engineer" and named him the 2004 Broadcast Engineer of the Year, primarily for his work as project director for ESPN's Bristol, Conn., broadcast facility. Szypulski chairs three SMPTE standards committees and continues to hold the FCC General Radiotelephone Operator license he earned in his high school years.

Steven D. Tiffen is president and CEO of The Tiffen Company, a manufacturer of optical filters and imaging accessories, as well as lighting and camera support systems. The company's product and engineering excellence has led to a Technical Achievement Award and a Scientific and Engineering Award from AMPAS, as well as multiple Emmy® Awards. Tiffen himself has received an Emmy Award for Engineering and a Technical Achievement Award from the Society of Camera Operators. He is an associate member of the ASC and a member of the PMDA Board, and belongs to other industry-related organizations.

James T. Whittlesey helped to build the digital cinema business at Deluxe Digital Cinema, where he now serves as senior vice president of technology. Earlier, while at Digital Cinema Initiatives, he contributed to image-compression testing and evaluation, co-authored and edited the company's digital cinema system specification, and chaired the SMPTE working group on digital cinema packaging. Over two prior decades at Grass Valley, Whittlesey was responsible for the mastering and theatrical presentation of "Jurassic Park III," the first Hollywood movie to use HD MPEG-2, and helped to develop the Emmy® Award-winning GVG Profile, the first prototype video server using Motion JPEG.

Barry Bryan Zegel is senior vice president and general manager of CBS Television City in Los Angeles. During his three decades with CBS, he has served in a variety of engineering, technology, and operations positions. Not only did he work on all three of CBS' Winter Olympics broadcasts (Albertville, Lillehammer, and Nagano), for which he received two Emmy® Awards, he also facilitated the conversion of CBS programming to HD. In addition, Zegel served as a rapporteur in Geneva on the United Nations' International Telecommunications Union committee, which was responsible for establishing worldwide 3D standards.

The Fellows Luncheon will feature a keynote by SMPTE Fellow Glenn Reitmeier, who serves as both senior vice president of advanced technology at NBC Universal and chairman of the ATSC Board for 2013.

About the Society of Motion Picture and Television Engineers
The Oscar® and Emmy® Award-winning Society of Motion Picture and Television Engineers (SMPTE), a professional membership association, is the worldwide leader in developing and providing motion-imaging standards and education for the communications, technology, media, and entertainment industries. An internationally recognized and accredited organization, SMPTE advances moving-imagery education and engineering across the broadband, broadcast, cinema, and IT disciplines. Since its founding in 1916, SMPTE has published the SMPTE Motion Imaging Journal and developed more than 650 standards, recommended practices, and engineering guidelines. SMPTE members include motion-imaging executives, engineers, creative and technology professionals, researchers, scientists, educators, and students from around the world.