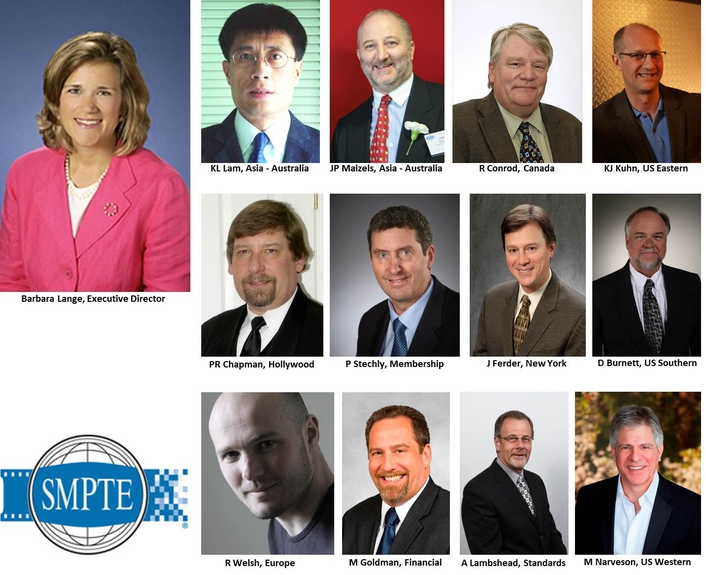 Key SMPTE Leadership Posts Reflect Growth of Society Worldwide
The Society of Motion Picture and Television Engineers (SMPTE), the worldwide leader in motion-imaging standards and education for the communications, media, entertainment, and technology industries, today announced that the organization has elected new officers and governors, who will take office on Jan. 1, 2014.

"The SMPTE officers and governors, both new and returning, whose terms of service begin in 2014, reflect our ongoing commitment to membership, standards, and education, as well as our dedication to building a diverse global engineering workforce fit to address the demands and opportunities presented by the rapid evolution of digital media technology and business models," said SMPTE Executive Director Barbara Lange. "Many of these SMPTE members already have contributed a great deal to the society's growth, and all bring the organization valuable knowledge, experience, and energy that will fuel further achievement and even greater advances for the motion-imaging industry."

Elected as officers for the two-year 2014-2015 term, Alan Lambshead will serve as the society's standards vice president; Matthew Goldman, senior vice president of TV compression technology at Ericsson, will again serve as finance vice president; and Paul Stechly, president at Applied Electronics, will continue his service as membership vice president.

Nine governors were elected to serve in SMPTE posts around the world. KL Lam, who was vice president of broadcasting and engineering operations at Hong Kong Cable TV until 2011, will serve again for a one-year term (2014) as the Asia-Australia region governor, and John Philip Maizels, a consultant at Entropy Enterprises and Productions, has been elected to serve a two-year term (2014-2015) as governor of the same region. Richard Welsh, chief executive officer at Sundog Media Toolkit, will again serve as the governor for Europe, the Middle East, Africa, and Central and South America.

The officers and governors elected for the 2014-2015 term will serve on the SMPTE Board of Governors along with other board officers, regional governors, and directors of specific areas, including standards, education, and membership.

About the Society of Motion Picture and Television Engineers
The Oscar® and Emmy® Award-winning Society of Motion Picture and Television Engineers (SMPTE), a professional membership association, is the worldwide leader in developing and providing motion-imaging standards and education for the communications, technology, media, and entertainment industries. An internationally recognized and accredited organization, SMPTE advances moving-imagery education and engineering across the broadband, broadcast, cinema, and IT disciplines. Since its founding in 1916, SMPTE has published the SMPTE Motion Imaging Journal and developed more than 650 standards, recommended practices, and engineering guidelines. More than 6,000 members — motion-imaging executives, engineers, creative and technology professionals, researchers, scientists, educators, and students — who meet in Sections throughout the world, sustain the Society