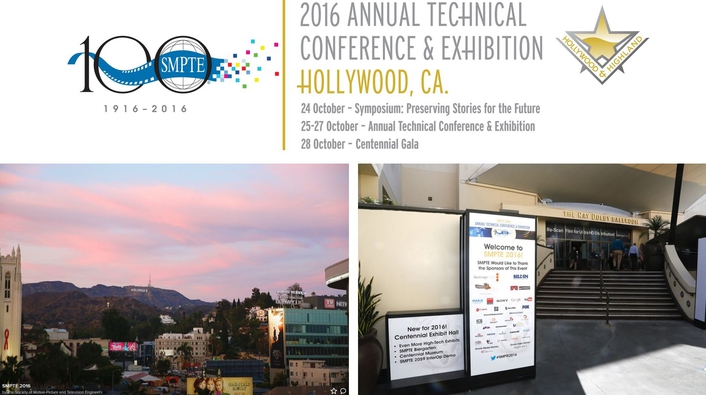 The Society of Motion Picture and Television Engineers® (SMPTE®), the organization whose standards work has supported a century of technological advances in entertainment technology, today announced that the SMPTE 2016 Annual Technical Conference & Exhibition (SMPTE 2016), held on Oct. 25-27 in Hollywood, California, drew nearly 2,500 registered attendees for a landmark event featuring 72 expert presentations and more than 108 exhibitors spread across two exhibit halls. This year's event culminated with the SMPTE Centennial Gala, a celebration of the Society's 100th birthday.

"Attendance for SMPTE 2016 was higher than for last year's event, with guests from around the world joining us in Hollywood for an exceptional technical program and historic Centennial Gala," said Barbara Lange, SMPTE executive director. "In fact, it was a fantastic week, offering everything from the latest creative and technical innovations to a beer garden, '20s-themed honors and awards reception, and black-tie gala featuring great entertainment and honoring top motion-imaging innovators."

The day before the official start of SMPTE 2016 featured the SMPTE 2016 Symposium, titled "The Future of Storytelling and How to Save It." The daylong symposium featured a keynote by Daniel Teruggi, director of the Research and Experimentation Department at the National Audiovisual Institute in Paris and recipient of this year's SMPTE Archival Technology Medal Award. Teruggi placed preservation of data in a historical context and pointed out that preserving creative content, such as a piece of music, is about more than storing something away. "The general problem is not to conserve," he said. "It is to be capable, after any period of time, to perform the piece of music again." Teruggi's suggestion that the preservation of content must be oriented toward restitution was a fundamental theme throughout the symposium.

Also on Oct. 24, a record number of attendees at the Women in Technology Luncheon were treated to a conversation with Victoria Alonso, executive producer and executive vice president of physical production for Marvel Studios. Joined by interviewer Kari Grubin, vice president of mastering for The Walt Disney Company, Alonso spoke of her experiences in the industry and offered advice to other women working to succeed in the business. "Sometimes women need to learn to take each other and hold each other as we're going up…There's only so much you can do to break the glass ceiling if no one's following you."

The SMPTE Honors & Awards Ceremony set a glamorous tone for the week. The Roaring '20s-themed event welcomed guests on the red carpet before moving on to recognize the elite group of individuals who earned accolades from the Society. The ceremony was followed by a poolside reception at the Loews Hollywood Hotel.
On Oct. 25 filmmaker, innovator, and entrepreneur Douglas Trumbull joined SMPTE President Robert Seidel, vice president of engineering and advanced technology at CBS, to present the SMPTE 2016 opening keynote. With Trumbull addressing cinema and Seidel speaking to broadcast, the pair opened the conference with a rich look at the past, present, and future of media and entertainment technology, as well as supporting standards work. Each speaker presented archival video from pivotal points in imaging innovation, and many video clips clearly resonated with the SMPTE 2016 audience. Both Trumbull and Seidel emphasized the importance of immersion to the audience experience — a fundamental goal, noted Trumbull, for sweeping epics such as "Napoleon" (1927) and "Lawrence of Arabia" (1962); today's groundbreaking films, such as Ang Lee's "Billy Lynn's Long Halftime Walk;" and the virtual, augmented, and mixed reality experiences of tomorrow. 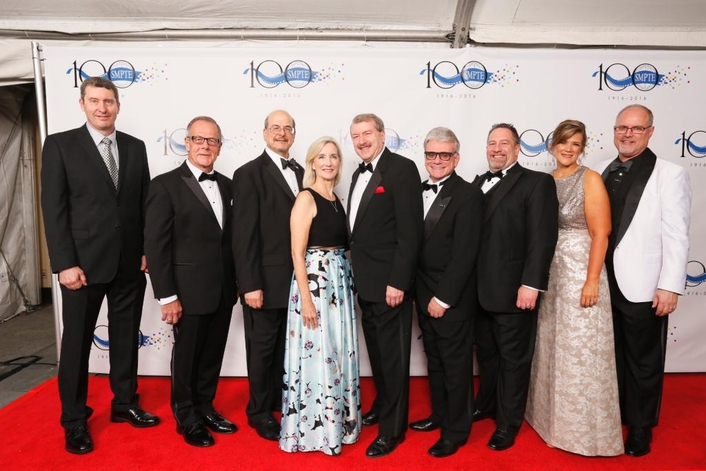 SMPTE Executive Committee and Board of Governors at the Centennial Gala

During SMPTE's Annual General Membership Meeting later that day, Lange discussed the Society's mission, vision, and current work, while also taking a look back at its rich history. Through stories, images, and some of the industry's earliest moving pictures, she provided a look at the remarkable life and work of C. Francis Jenkins, the prolific inventor and founder of the Society back in 1916. In reviewing the 100-year story of the Society itself, she reflected on some of the critical standards introduced by SMPTE with the largest number published in 2016; noted the current growth and the success of the Society across the globe; highlighted the Society's rich educational offerings and its partner, the Hollywood Professional Association (HPA®); and thanked members for their tireless work across standards, membership, and education. Lange also announced a new SMPTE Section in Poland, as well as three new student chapters: George Mason University (Fairfax, Virginia), Media Arts Charter High School (Albuquerque, New Mexico), and University of Surrey (U.K.).

Sessions on broadcast infrastructure discussed current and future use of coaxial cable and serial digital interface (SDI), including its potential to deliver 100 Gigabit services and enable a seamless transition to internet protocol. Moving into the cloud, further sessions focused on how broadcast media-processing capabilities can be migrated to an IP architecture and virtualized across a data center and cloud infrastructure. In discussing virtual reality (VR) workflows and content interchange, session presenters reviewed techniques for increasing the reliability and ensuring the quality of VR productions.

One of the most discussed presentations was "Detection of Video Modification," delivered by Edward Grogan of the U.S. Department of Defense. This provocative presentation provided attendees with a look at the scope and challenges that the U.S. government faces from modified videos, a summary of some of the work now being performed to reduce the risk of undetected modification, a technical look at several of the methods used to detect forgeries, and fascinating examples of content modification.

A session titled "Re-Inventing Entertainment Engineering: How to Blend the Experience of Yesterday with Millennials' Vision of Tomorrow" attracted a large audience for its discussion and subsequent Q&A on how the entertainment industry needs to attract and retain younger engineers to strengthen its ranks and its future. Presenters spoke about how the differences between the baby boomer generation, Generation X, and millennials are vast in everything from work philosophy to pace to professional goals. They asked if the entertainment industry is properly equipped to recruit, manage, mentor, and retain the new generation. Each of the presenters, themselves millennials working in entertainment engineering, gave a brief presentation on her or his experience, outlook, and hopes for the future.

The Centennial Museum in the aptly named Centennial Exhibit Hall provided attendees with the opportunity to view some of Jenkins' own equipment and other artifacts — on loan from the Wayne County Historical Museum in Richmond, Virginia, with the assistance of Belden, Hugh Livingston at Sound Designs, and Aspera — from the early days of the motion-imaging industry. Centennial Hall also included interop demonstrations of the SMPTE ST 2059 standard, which uses IEEE 1588 Precision Time Protocol (PTP) to provide time-aligned signal generation, thus providing synchronization of IP-based media equipment with conventional genlocked SDI equipment and AES 67. The demos highlighted how the synchronization standard works between multiple manufacturers. 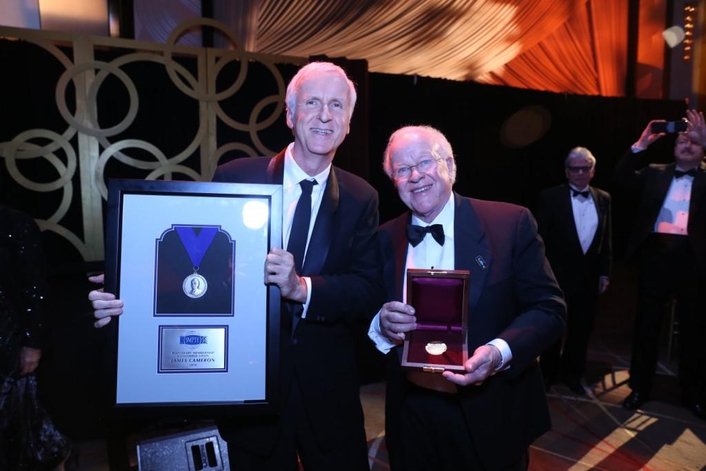 James Cameron and Douglas Trumbull with their SMPTE Awards 2016

At the Oct. 28 SMPTE Centennial Gala following the conference and exhibition, James Cameron and Douglas Trumbull received SMPTE's top honors. SMPTE officially bestowed Honorary Membership, the Society's highest honor, upon "Avatar" and "Titanic" director Cameron in recognition of his work advancing visual effects, motion capture, and stereoscopic 3D photography, as well as his experimentation in HFR.
Oscar-winning special effects cinematographer Richard Edlund presented the Society's most prestigious medal award, the Progress Medal, to Trumbull, who was responsible for the visual effects (VFX) in "2001: A Space Odyssey" and "Blade Runner." The award recognizes Trumbull's contributions to VFX, stereoscopic 3D, and HFR cinema, including his current work to enable stereoscopic 3D with his 120-frames-per-second Magi system.

Oscar-winning VFX artist Joe Letteri presented the Honorary Membership award to Cameron. "To say this is an honor is a ridiculous understatement. This is kind of a pinch-me moment — a very emotional moment," said Cameron. "To be here with a group of engineers, and to be acknowledged by engineers, is so much more meaningful to me truthfully, then all the kind of glitz and glamour of the artistic side of Hollywood in a way because at heart, you guys are my peeps. I love engineering — by the way, there are too many guys and not enough gals — [and] there would be no art in this highly technical art form of ours without engineers." After noting new and emerging motion-imaging technologies, he concluded, "When you see how far we've come, it's dazzling. It's magic."

Both Cameron and Trumbull received standing ovations. Nearly 500 SMPTE Members and guests turned out for the gala in black-tie attire and were entertained as the evening's host, John O'Hurley, delivered a rousing SMPTE version of his "Razzle Dazzle" performance from the Broadway musical "Chicago." In addition to O'Hurley, Letteri, and Edlund, the evening also featured presenters Billy Zane, actor and producer who played the antagonist Cal Hockley in Cameron's "Titanic," and Marsai Martin and Miles Brown of the ABC television series "Black-ish."

Must-see photos from the event are online here

About the Society of Motion Picture and Television Engineers® (SMPTE®)
For the past 100 years, the people of the Society of Motion Pictures and Television Engineers (SMPTE, pronounced "simp-tee") have sorted out the details of many significant advances in entertainment technology, from the introduction of "talkies" and color television to HD and UHD (4K, 8K) TV. Since its founding in 1916, the Society has earned an Oscar® and multiple Emmy® Awards for its work in advancing moving-imagery education and engineering across the communications, technology, media, and entertainment industries. The Society has developed thousands of standards, recommended practices, and engineering guidelines, more than 800 of which are currently in force.

SMPTE's global membership today includes 7,000 members, who are motion-imaging executives, engineers, creative and technology professionals, researchers, scientists, educators, and students. A partnership with the Hollywood Professional Association (HPA®) connects SMPTE and its membership with the professional community of businesses and individuals who provide the expertise, support, tools, and infrastructure for the creation and finishing of motion pictures, television programs, commercials, digital media, and other dynamic media content.